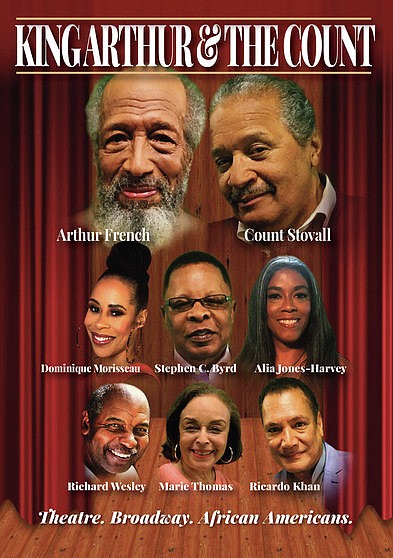 Juney Smith is a man on a very important mission. Smith is a talented man doing something necessary—preserving the stories in Black Theater. He previously made a documentary film on the life and career of Woodie King Jr.––New Federal Theatre called “King of Stage, The Woodie King Jr. Story” and is now chronicling the careers of theater greats including stage veterans Arthur French, Count Stovall and Marie Thomas. He also spotlights African American veteran playwright Richard Wesley and female playwright Dominique Morisseau, along with the only pair of lead Black Broadway producers, Stephen C. Byrd and Alia Jones-Harvey of Front Row Productions. There is also an in-depth view of Ricardo Khan, founder of Crossroads Theatre Company in New Brunswick, New Jersey. His newest documentary is “King Arthur & The Count.”

When I say that Smith chronicles people lives, he truly does his homework as he shows photos of them when they were younger, photos from various productions and pivotal moments in their lives and then each person gets to share their own story and tell it with the excitement that they feel recollecting the humble beginnings of their careers and the struggles they faced. Watching this documentary film was like having a private discussion with each of these individuals and them sharing all the nuances in their lives that have bought them to where they are today. It was a living history lesson of those who are here now, still and were and are succeeding. They freely give their stories and provide a blueprint to follow for the next generation.

It was so delightful and moving to hear each person share their personal story and learn the various jobs that people did prior to what they are known for in the world. It was also an opportunity for people like an Arthur French and Count Stovall to recall the amazing great talents that they worked with throughout the years. Hearing about it and then seeing the production shots with them and these beloved thespians was so inspiring and beautiful. Smith through dedicated research has created a dazzling and stunning love letter to these talents with this documentary. He has granted that generations to come will know who these people are and the rich history that they are associated with. What was so engaging about this documentary is the fact that Smith also used it as a space to have these participants say the names and tell the stories of African American actors like Sidney Poitier, Glynn Turman, Morgan Freeman and Ruby Dee and so many other phenomenal talents that they knew. Of those actors mentioned, you didn’t just hear about the artistic gifts of these people, you heard about the humanity they processed and the Civil Rights Movement and other causes they stood up for. You hear about a period in theater in the ’70s, ’80s and ’90s when Black Theater was appreciated and thriving. You hear about Black productions that were picked to grace the Broadway stage, written by Black playwrights and those who performed in them.

Everything about this documentary is a testament to the talent of African Americans and their steadfastness to take on challenges and overcome any adversity. It also demonstrated not only people’s natural talents, but the opportunities that they sort to make for other Black people in theater. Whether it was Ricardo Khan starting Crossroads Theatre Company in New Brunswick and doing the work of Black playwrights to give our stories voice and actors representing our reality a place on stage, or it was Stephen Byrd and Alia Jones-Harvey producing through Front Row Productions, Broadway plays with all-Black cast including “Cat On A Hot Tin Roof,” “A Streetcar Named Desire,” and “The Trip To Bountiful,” to name a few—demonstrating that African American actors can handle whatever they are given an opportunity to do. Dominique Morisseau realized while taking acting classes in college that she wasn’t seeing stories by African Americans and so she set out to write the stories, get them done and that is exactly what she did and continues to do. Looking at a genius like Richard Wesley one can only appreciate and love his dedication to the craft of playwrighting and his interest in always keeping the integrity of our stories maintained on the stage. He has always created characters that we in the African American community can easily identify with. He created stories from true life and the heart and it shows in his compelling works.

Smith’s documentary gives the viewer the opportunity to see humble greatness in living legends and I am very grateful for the dedication he is showing and for these film gifts he is giving, not just to the Black community, but to the world.

“King Arthur And The Count,” A Juney Smith film, is a documentary you need to watch and get your friends to watch. There is something, dare I say, holy, about what Smith is doing. He is documenting the stories of our creative elders, trailblazers, putting in photos, production shots and preserving precious moments shared with humility, candidness and love. “King Arthur And The Count” will be released as of March 31.