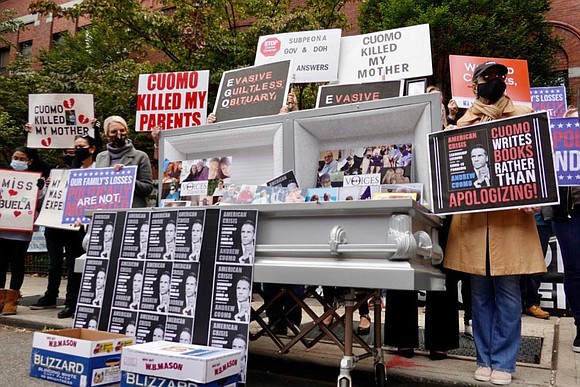 Photo courtesy of the Arbeeny Family

With the one-year anniversary of the governor’s advisory directing nursing homes in the state of New York to take in patients suspected of having COVID-19, a new executive order will let more people into nursing homes, albeit temporarily.

On the day of Cuomo’s executive order New York State Assemblyman Ron Kim said that the governor’s approach to the nursing home issue was unsatisfactory.

“When I first began to fight back against this administration’s fatally flawed policies, it sometimes felt like I was the only one seeking the truth in a sea of deafening applause,” said Kim. “But soon, family after family began reaching out to me with stories and cases tragically similar to my uncle’s. By the time the deadly consequences of the governor’s actions became widely known, my office had spoken to countless families in the same situation.”

Cuomo said that his executive order is just following the new guidelines given by the U.S. Centers for Medicare and Medicaid Services.

“From the very beginning we’ve used science and data to find the appropriate balance between protecting our most vulnerable populations in nursing homes and the importance of allowing safe contact with their loved ones,” the governor said. “We now have three effective vaccines that are leading to significant decreases in long term care COVID cases and a robust staff testing system to limit community spread from entering a facility.

“Now is an appropriate time to take the next step and safely reconnect this community with their families.”

The past few months haven’t been kind to the governor. After a year of receiving praise for his handling of the coronavirus pandemic in the state, the cracks in the armor started to show.

Next up came a string of sexual misconduct allegations and claims of inappropriate behavior that have come from aides in his administration and other women in the governor’s orbit. The latest allegation came from a 55-year-old woman named Sherry Vill. During a news conference with her lawyer, Gloria Allred, Vill said Cuomo engaged in “unwelcome physical contact.” She said that Cuomo kissed her when he stepped into her home, which was caught on camera by her son.

“He took my hand and said, is there anything else you need…His actions were overly sexual, highly inappropriate and disrespectful to me and my family,” continued Vill. Cuomo denied all allegations.

It was also revealed that Cuomo family members were given special access to the COVID vaccine. Cuomo’s spokesperson, Richard Azzopardi, said in a statement that people are attempting to “rewrite the past” and that the protocol followed by the Cuomo administration was fine.

“In the early days of this pandemic, when there was a heavy emphasis on contact tracing, we were absolutely going above and beyond to get people tested—including in some instances going to people’s homes, and door-to-door in places like New Rochelle—to take samples from those believed to have been exposed to COVID in order to identify cases and prevent additional ones,” said Azzopardi. “Among those we assisted were members of the general public, including legislators, reporters, state workers and their families who feared they had contracted the virus and had the capability to further spread it.”

In addition to these issues, the governor fought back against New York State Attorney General Letitia James’ investigation that concluded that his administration undercounted COVID-related deaths in nursing homes

Last week members of 1199SEIU, advocates and supporters held a candlelight vigil in front of the Adam Clayton Powell Jr. State Office Building in Harlem to honor residents who had died from COVID. During the same week, in Brooklyn, Kim, New York City Council Member and comptroller candidate Brad Lander and New York City mayoral candidate Andrew Yang joined local supporters to honor the family members of loved ones who died from COVID that were infected in nursing homes. Similar vigils were held in Hicksville, L.I. and at the Capitol Building in Albany.

Kim said that with the current harassment scandal and revelations of preferential treatment for COVID vaccinations, there are more than enough reasons for Cuomo to leave Albany.

“He does not have the moral decency to govern our state,” said Kim. “We have grieved for far too long now without any real closure, but I am proud of everyone for the tenacity and willpower they have shown.”