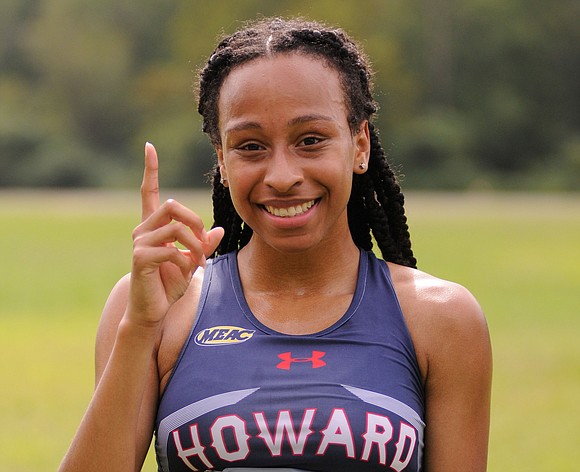 After a long layoff from competitive track—first due to injury and then due to the cancellation of competition due to the pandemic—Howard University senior distance runner Destiny Stanford is embracing the opportunity to compete this outdoor season.

Stanford, who grew up in New Jersey, started her athletic journey at a running club in the sixth grade. There was a fitness test and she was the fastest person in the mile run. From there, she began running cross country and track in middle school. The high school coach saw her at meets, which sealed the deal that she would continue competing in high school.

She currently competes in distances from the 800 meters to six kilometers. Stanford said she gravitated to longer distances because she wasn’t as good in the sprints. “The thing I love the most about running distance is that you…can make a comeback in the race,” she said. “You have a lot of ground to cover, so you can always come back from a mistake or mishap and still win the race.”

While she enjoys both track and cross country, she appreciates the opportunity to experiment with different distances in track. “There’s more to play around with,” Stanford said. “But the scenery on cross country courses is definitely a great experience.”

Her decision to attend Howard was made when she came to visit the campus during her senior year of high school, noting that she felt at home. “I wanted to come and be a part of the rich legacy and history behind Howard,” Stanford said. “I’ve had experiences that I’ll carry with me the rest of my life. It gave me the space to be myself…having a lot of like-minded people around me.”

Stanford appreciates her coaches at Howard, including Director of Track and Field David Oliver, a Howard alum and an Olympic medalist in the 110-meter hurdles. His information and motivational talks keep her inspired.

A health science major, Stanford will graduate this spring. She plans on enrolling in an accelerated bachelor’s in nursing program next year. That is an intensive nursing curriculum for people who have already earned a bachelor’s degree.

For now, there are still races to be run. “I’m looking forward to competing at my last MEAC Championship,” said Stanford, who has been on the Mid-Eastern Athletic Conference Commissioner’s All-Academic Team. “I haven’t competed at MEACs since the end of my sophomore year. I’m looking forward to seeing what I can do on the big stage.”