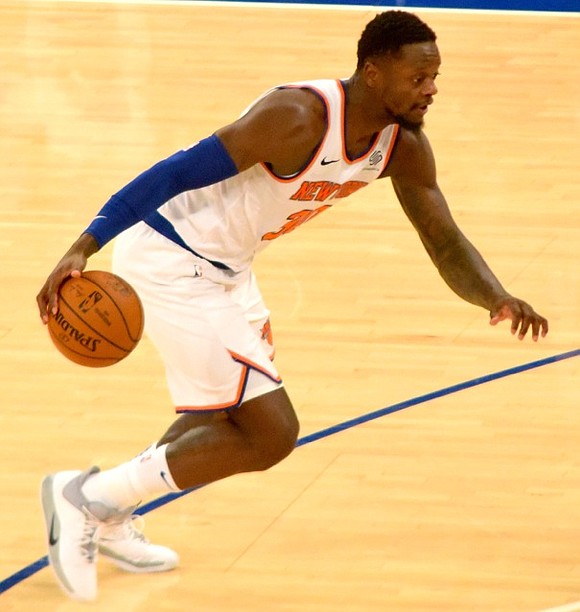 After the Knicks easily dismissed the stumbling Detroit Pistons on the road by 125-81 on Saturday, the franchise’s largest margin of victory since defeating the Toronto Raptors by 125-79 in 1996, Reggie Bullock and Julius Randle were asked to assess their matchup coming two nights later against the Brooklyn Nets’ trio of Kyrie Irving, Kevin Durant and James Harden, commonly referred to as the Big Three.

“We got a Big Five,” the 6-foot-7 guard/forward Bullock confidently replied.

“So we’re not really concerned about their Big Three,” Bullock emphasized. “We know what type of basketball we will be able to come into the game and play. We’re focused on our team, the game plan that [head coach Tom Thibodeau] draws up. Other than that, that’s all we’re focused on—the Knicks.”

Randle, a first time All-Star this season, asserted his attention was on his team’s capabilities and not the immense talents of the Nets’ future Hall of Fame trio.

As it turned out the Nets didn’t have Durant, who had not played since injuring his left hamstring versus the Golden State Warriors Feb. 13. Harden left the game in the first quarter due to a right hamstring strain and is expected to be sidelined the next 10 days. The Big Three was reduced to a solo act. But Irving was enough to combat the Knicks.

He was spectacular in scoring 40 points, and when Randle’s potential game-tying 18-foot fadeaway jumper bounced off the rim as time expired, the Knicks walked out of the Barclays Center with a painful 114-112 loss after leading by 13 early in the third quarter. It dropped them to 25-26 and the eighth spot in the Eastern Conference prior to the NBA schedule tipping off on Tuesday. The Knicks were in Boston to face the Celtics last night (Wednesday).

“It does nothing for me,” said Randle succinctly regarding the Knicks playing the Nets closely until the final buzzer. “It’s either a win or a loss. No moral victories.” Randle ended the night with his fourth triple-double of the season with a state line of 19 points, 15 rebounds and 12 assists. Despite Bullock’s and Randle’s belief the Knicks can compete on near equal footing with any team in the league, the evidence is irrefutable they are not on the level of the elite.

Although Durant, Harden and Irving have only played seven games together since Brooklyn acquired Harden in a trade with the Houston Rockets Jan. 14, they were 35-16 after beating the Knicks, the best record in the East and the third highest winning percentage overall. Conversely, the Knicks, who are laying the foundation to become a top contender, were in a tenuous battle in the conference for one of the 10 playoff seeds. They will host the Memphis Grizzlies at Madison Square Garden tomorrow, and remain home Sunday and Monday to play the Toronto Raptors and Los Angeles Lakers respectively.