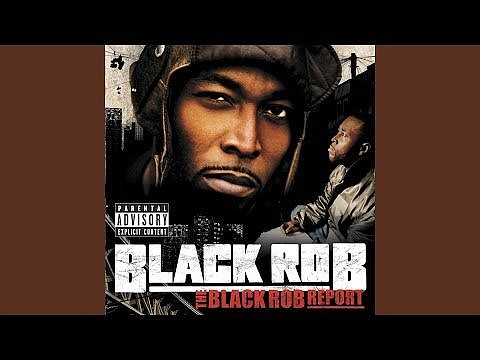 “Rob passed away ’bout an hour ago.” Curry revealed. “I need for his daughter, Iona Ross, little Robert Ross, y’all get in touch with me, please.”

Another former label-mate, Mario Winans, did the same: “This hit my heart, we will NEVER forget you brother!” he tweeted. “RIP BLACK ROB!”

Curry added that Rob had endured multiple health concerns, including diabetes, kidney malfunction and lupus; plus undergoing dialysis, since 2015.

The previous week DJ Self posted a video of a weakened Rob from his hospital bed captioned: “Let’s keep our prayers up Black Rob! Get well man Please people out there take care of yourself. BR was one of the greats Had NY on his back like Whaooo.”

He noted that he was homeless and battling various health ailments. “Oh man, I’ve been dealing with this for five years,” Rob explained. “Four strokes. I don’t know what to tell you, man. $#it is crazy. The $#it is hard.”

On April 11, Rob’s friends started a GoFundMe campaign to defray medical costs, collecting about $30,000 last week. After his death, donations poured in.

Upon Rob’s April 12 discharge from Piedmont Atlanta Hospital he said his health has “been up and down. I’m just trying to bear with this and do this, man. It’s been, killer. After I had my stroke, I had to re-memorize all my s—, all my lyrics. I didn’t know them, so that right there was the biggest challenge. Years. That took years, man. I been f—ing with this s—, struggling with this, with my baby moms, for years.”

Born in Harlem and raised in Thomas Jefferson Houses he started writing rhymes as a pre-teen. By the 1990s he was known as “Bacardi Rob” and became affiliated with the rap group, Schizophrenics, and began featuring on many popular mixtapes prior to getting signed to Bad Boy Records by Sean “Puffy” Combs in 1995.

Constant legal issues prevented him from achieving the success his talent warranted.

On Sunday, Curry said Rob was hospitalized on Saturday, revealing the cause of death as “cardiac arrest caused by a rare kidney disease.”

“He was very concerned in getting his life together health-wise,” Curry stated. “Rob made sure he knew what he had to do before he parted this world to make sure we all alright, and that’s what he did. Bad boy for life, yo.”

Curry said Combs spoke with Rob on Friday. “Before Rob passed, he said, ‘One thing I was going to do before I leave this Earth is make sure we all speak to each other again,’” Curry recalled. “It’s always great to see when people are growing and learning to forgive.”

Rob left Bad Boy Records in 2010, reuniting with them for their Bad Boy Family Reunion Tour in 2016.