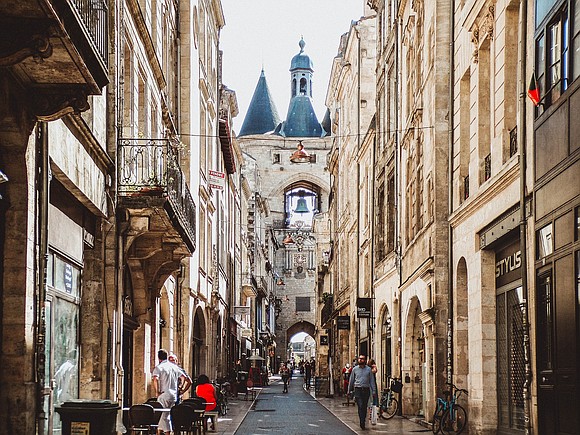 Who knows when you’ll be able to safely travel to France? But when you are, instead of choosing the City of Lights, do something different. For sure, when it comes to France, Paris often hogs the spotlight. While few would argue that it doesn’t deserve it, there’s more to the France story and you’ll find it in Bordeaux. In fact, it proved to be the highlight of a journey through Southern France I took with Collette Tours.

Bordeaux is a different beast than Paris. For one thing, you won’t have to wind your way through the massive crowds. That’s not to say you’ll have the town to yourself. It’s hardly a sleepy place. Bordeaux is among France’s top 10 cities, with a population of more than 240,000, but it’s not crazy-busy either. It strikes the right balance, a bit of bustle with tons of college student energy, edge and bliss. Better still, you generally won’t find expensive Parisian price tags, be it dining or accommodations.

For the action, check out Rue Sainte-Catherine, 1.2 km of shopping and believed to be the longest pedestrian street in Europe. The designer stores, stunning Gothic, Renaissance and contemporary architecture, packs enough pizazz to make it worth a stroll even if the shops are beyond your budget. Sprinkled in the mix you’ll find eateries, along with a handful or so of less fancy stores. While the scene is high-end retail, it being Bordeaux, there is a contrast of street musicians and people otherwise expressing themselves, like the man on stilts draped in a gold full-length gown, with branches sprouting from his body, head thrown back. You can’t tell him he’s not a tree. You’ll love the show that can be Sainte-Catherine. Self-expression is the order of the day in Bordeaux. Perhaps that’s not surprising in a place where wine is like water.

Bordeaux is all about vino. This region, which is in the southwest of France, is world-renowned for its wines. It is plentiful and while you can go for expensive, there is a vast selection of really good wine at between $5-10 U.S. No wonder everyone is so friendly. Bordeaux is a must for wine lovers in particular. Whether you’re an oenophile or not, you will be impressed by La Cité du Vin, a museum/cultural center that celebrates wine. Even the building is spectacular. It’s shaped like a wineglass when you swill it. The museum, which opened a few years ago, bills itself as an immersive journey that will show you wine like never before, through history and culture from around the world. You can spend hours there, getting swept up in 3-D films, engrossing kiosks where you control the narrative and more. When you’ve had enough talk about wine you can do a tasting. There is an enormous store with wines from around the globe. Truthfully, if you took a trip to Bordeaux solely to visit the La Cité du Vin you wouldn’t feel cheated.

What goes with great wine but great food. Bordeaux’s culinary scene is vibrant. In the last few years, celebrity chef Gordon Ramsay opened two restaurants in Bordeaux. Good luck getting a reservation at 2-Michelen-starred Le Pressoir d’Argent Gordon Ramsay or Le Bordeaux Gordon Ramsay. Restaurants are popping up like daisies. Over the last few years new additions included Cent33 headed by noted chef Fabien Beaufour. Cent33’s Robotayaki, a wood-burning fireplace in the kitchen used in Japan, has diners raving about the technique. Casa Gaia and Arcada are two other restaurants making their mark in Bordeaux.

As if that weren’t enough to satiate the most discerning foodies, there’s La Boca. This is no ordinary food court. Fill up on Japanese, seafood, Italian, tapas, Mexican street food, fish, wines, cheeses and more.

Then there is Les Halles de Bacalan, an indoor market with local producers opened in front of La Cité du Vin. Quite frankly, there’s little you can’t buy there to tickle your palate.

Much as Bordeaux continues to emerge as a hipster, funky city where you have to watch out for the skateboarders and bikers as much as the pickpockets, this UNESCO World Heritage city is awash in history with landmarks, some that date back to the 15th century. There are many to see, but put on your must-see list, Pont de Pierre, with its panoramic views of Bordeaux and spans the Garonne River. The bridge has 17 arches and stretches 1,568 feet. You can walk it if you like. Take in the great views of the quay and port area. Tour Pey Berland was built in the 15th century, you can climb the tower for perfect views of the statute of Notre-Dame d’Aquitaine, which is on top of the tower. Another popular site is Esplanade des Quinconces, the city’s largest square, and among the largest in Europe. It overlooks the Garonne River and is beloved for its monuments and fountains.

As for where to stay, the InterContinental Bordeaux––Le Grand Hotel is as luxurious as it sounds with its sophisticated, elegant 19th century décor, you’ll feel like you’re in Old World France. There are many options. Consider too, the Radisson Blu with its rooftop bar that shows off views of the Bassins à Flot and the nearby La Cité du Vin, Le Palais Gallien, a luxury hotel with an outdoor pool and rooftop or Eklo, a popular eco-friendly hybrid hotel/hostel

No doubt you should put Bordeaux on your must-see list for some time in the not too far future. Get there before the masses discover the city’s renaissance.