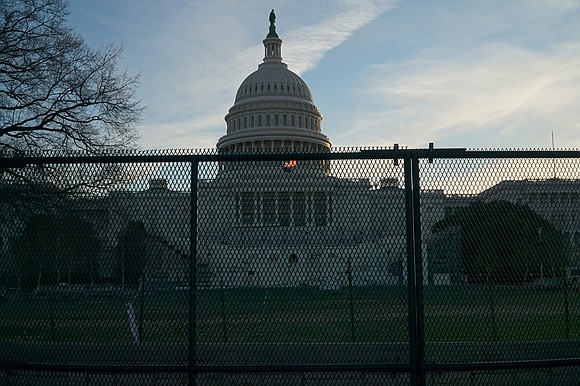 Protective fencing up at the US Capitol, several days after a pro-Trump mob stormed the building. Photo by Ian Hutchinson on Unsplash

My statement below caused “The Chief Leader,” who purports to be the voice of Civil Service workers and employees in NYC, to issue a disclaimer in defense of Pat Lynch, on the grounds that Lynch and the NY PBA had criticized the actions of the police in the George Floyd situation. But here is what I had actually said:

“Pat Lynch and the old guard of the PBA consider it more important to stand behind MAGA, which at its core argues that, unless cops are allowed to use chokeholds and knees on the necks of Black and Brown people of all ages and genders, or shoot down unarmed ones, chaos, mayhem and lawlessness will prevail. Even if they have to give mayhem a nudge or a big lift by, for instance, refusing to stop crime when they can, via police ‘strikes’—fraudulently invoking union activism for the benefit of old-guard racists who, understandably, support ‘white power’ Donald Trump and want to see that status quo preserved.”

Readers will note that saying that “to stand behind MAGA, which at its core argues that…” is simply NOT the same as saying that Lynch and the leadership of the PBA specifically advocated in favor of the actions of the police in the George Floyd situation. Nor did I say that they advocated “for knees and chokeholds on the necks of Black and Brown people” (even though, the record shows, that they in fact do, just saying that that is not what I said in my piece). But the chief chose to tag me anyway and warmly welcomed commentary from readers who shared similar “outrage” at my remarks. But I get it—the shared super sensitivity of the parties involved, accuracy in reporting be damned!

But all this was before the Jan. 6th attack on the capitol. The naked truth revealed itself, and it was much worse, worse than just standing “behind MAGA.” If anything, I had understated the problem.

Because “blue lives” only mattered when it came to suppressing protests against the murder and brutalization of Black and Brown people by the police. But when it came to asserting violent white supremacy, blue lives can be sacrificed, if it gets in the way. Feet, fists, mace, teargas, anti-bear spray, fire extinguishers, spears, buttering rams, furniture, stun and actual guns. It turns out that even American flags and blue lives matter ones can be weapons against police when required for the purposes of violent white supremacy. Dozens of officers were injured, many of whom had to be hospitalized. Five deaths, including one badly battered officer, with another two officer suicides to follow shortly thereafter. They came outfitted with full body armor and weapons, with captive-taking devices, reconnaissance maps of capitol layout, legislative offices’ location and active legislator movement intelligence and with command-and-control communication devices. They even reassembled at least one lynching stage station and an execution guillotine they had pre-built and brought with them to the capitol. Finally, they also planted at least two bombs near the capitol the night before the attack. Several of them flashed badges. I plead guilty, guilty of understating the problem.

Meanwhile, the PBAs and the FOPs went into radio silence, or worse. With tons of photographic and social media evidence, the FBI and DOJ are debating who among the insurrectionists to go after and whether to only charge some!! Weeks have passed since Jan. 6th. They have arrested relatively few of the guilty, they have undercharged most of those they have arrested, sought very few search warrants for their homes, workplaces, computers and electronic devices and avoided bringing conspiracy charges, which carry hefty penalties, while many judges have issued pats on the wrists, sending most home to their families to hatch more plots—all to ensure the continuation and strengthening of violent white supremacy in America.

It has been reliably reported that some 14,000 people legitimately protesting police brutality were arrested during last summer’s protests, on terms that kept hundreds locked up and facing years in jail. But in DC, violent white supremacists stormed in, wreaked havoc and destruction and then walked out of the capitol. Why?

It is now crystal clear that “blue lives matter” was invoked fraudulently in order to defend the violent suppression of Black and Brown people by the police and to promote the reign of white supremacy over policing. This is no different than the myriad of excuses and cover stories used to justify and explain away white lynch mobs for decades after slavery. The affinity between violent white supremacy and policing has been well established and well known for decades.

As for the PBAs and FOPs, many of them undoubtedly had representatives among the violent white supremacist mobs in DC on Jan. 6th. About two dozen individual officers have thus far been identified. Their representation is clearly more widespread, representation fostered and encouraged by the “blue lives matter” dog whistle used by open white supremacists as well as the more polished leaders of the PBAs and FOPs around the country. As I said before, PBA administrations such as Lynch’s in NY must be overthrown or replaced. Nothing demoralizes a decent police officer more than systems and institutions that protect and promote corrupt, racist and misogynist officers, sickos and bullies who prey on women and on black and brown bodies for their nourishment and are oftentimes, by design, the ones allowed to call the shots in police organizations, even when they are a minority.

The Jan. 6th white supremacist mobs must be arrested, prosecuted and jailed. Their well- resourced networks must be traced and unearthed. The complicity of the oversight bodies that have long protected them must also be taken on with a renewed fervor to penetrate the institutional leadership, legislative and policy making structures that drive white supremacy from behind the scenes. They know how to identify and ferret out the racist sickos and psychopaths who want badges, guns and power over life. We must demand measures to identify and flush them out. Where they exist, where they thrive, is strictly a function of where they are allowed to. Go after the movers and shakers, put them out of business. Our tax money should go to benefit communities, not to fund our own abuse and murder.

But remember, Jan. 6th and its aftermath bring into the light what Black and Brown communities have always known—that they cannot rely on the forces of “law and order” to either protect or serve them, not even Congress could, not when the chickens came home to roost!