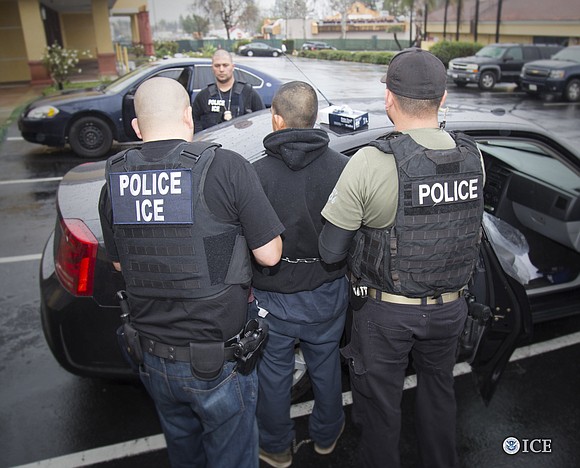 Back in 2018, Zachary Mueller penned a piece for America’s Voice titled: ‘The Many, Many Reasons Why ICE is a Rogue Agency.’ Of course, this was in the height of the Donald Trump administration, so many of course blamed Trump.

According to the Haitian Bridge Alliance and the UndocuBlack Network, a deportation flight to Jamaica took place on Jan. 28 despite the fact that President Biden had signed an executive order that put a hold on deportations for 100 days.

A second deportation flight to Haiti took place Monday, Feb. 1, the first day of Black History Month. This, as a coalition of migrant rights groups––Freedom for Immigrants, Al Otro Lado and Advocates for Immigrants Rights––presented fresh allegations to the new administration of the U.S. Department of Homeland Security, of describing the torture of Cameroonian asylum seekers in ICE custody.

On Tuesday, Feb. 2, 2021, ICE carried out another deportation flight to Haiti even though acting secretary of homeland security, David Pekoske, had stipulated that deportations should be limited to suspected terrorists, convicted felons deemed a “threat to public safety,” and migrants who arrived after Nov. 1, 2020.

The ICE deportation flight of last Tuesday carried no migrant who fit any of those criteria but simply follows a Texas judge’s ruling that has blocked Biden’s executive order, halting all deportations for 100 days.

It’s unlikely the judge’s block will stand, but while that’s worked out in the courts, ICE agents are swiftly still deporting immigrants.

In fact, ICE chose to deport a New York man, who was not born in Haiti and has never even been there, to the French Caribbean nation. Paul Pierrilus was born in French Saint Martin, but because that country has no birthright citizenship, he was never given citizenship there. His parents brough him to the U.S. as a child and he has lived here since. That is––until Tuesday, Feb. 2, 2021. Pierrilus, a 40-year-old financial consultant, was forced on to a deportation flight to Haiti by U.S. Immigration and Customs Enforcement agents and left there.

Also deported by ICE agents was a group of over 100 Haitian asylum seekers, who were sent back to Mexico, according to immigration advocates and a memo shared with the Miami Herald.

On Thursday, Feb. 4, 15 people were deported to Jamaica and on Friday, Feb. 5, 269 people to Guatemala and Honduras.

But it gets worst, officials in Haiti were notified last week to expect 14 flights in the first half of February—some as frequent as twice a day.

That’s far higher than the two monthly flights U.S. Immigration and Customs Enforcement chartered to Haiti back in March at the start of the pandemic, and about as high as during a peak period around last year’s presidential election, the Miami Herald reported.

The deportations have caused many immigrant advocates to panic and question the Biden election promises as memories surfaced of Barack Obama’s increased deportations during his first term.

But a whistleblower complaint filed Feb. 1 has said Trump Homeland Security top dog, Kenneth T. Cuccinelli II, sought to constrain the Biden administration’s immigration agenda by agreeing to hand policy controls to the pro-Trump union representing Immigration and Customs Enforcement. It also reportedly appears to allow the ICE union to argue that it can reject changes such as Biden’s recent order to focus on violent criminals and not prioritize other undocumented immigrants.

With Caribbean-born immigrant Alejandro Nicholas Mayorkas now at the head of the U.S. DHS, new rules are expected this week to ensure ICE focuses on fewer arrests and deportations, and a more restrained agency.

For now, we can only hope that the agency, that has been a rogue too long, gets in line or the Biden administration could be seriously embarrassed and in trouble with its base––much to the glee of Trump loyalists in the agency, whose only goal is to stymie this administration at every turn.