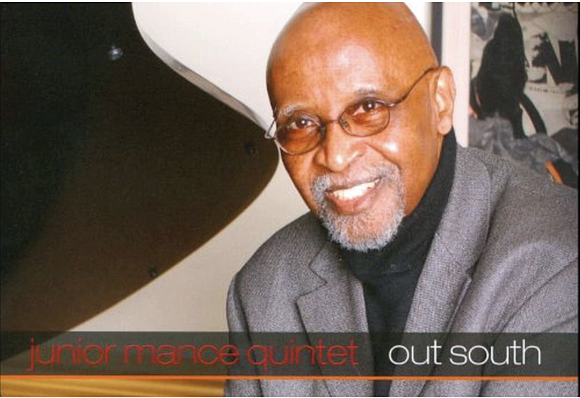 Junior Mance, a pianist whose soft floating touch always accented the blues and made him a first call musician with such artists as Dinah Washington, Dizzy Gillespie, Gene Ammons and Cannonball Adderley died Jan. 17, 2021 at his home in Manhattan. He was 92.

The cause was a brain hemorrhage caused by a fall last month said his wife, Gloria Clayborne Mance. He also had Alzheimer’s disease.

Mance and his wife Gloria formed their own music publishing company and record label, JunGlo, in 2007. Their first release, Live At Café Loup, featured the pianist in a trio with bassist Hidé Tanaka and drummer Jackie Williams with guest vocalist José James. He released his final recording, “For My Fans, It’s All About You,” in 2015. For more than two decades, he was anchored on Sunday’s at Café Loup in Greenwich Village (when he was not on the road). He retired in 2016.

He was the author of “How to Play Blues Piano” (1967). Mance didn’t jump at the opportunity to teach at the New School. “I was hired 20 years ago by Chico Hamilton, he gave me a week to see if I would like it,” said Mance during an interview for the Amsterdam News in 2007. “I loved it the first day and I’m still here having a great time.” He taught at the New School of Jazz and Contemporary Music from the late 1980s until 2011.

“Junior was a fantastic pianist, he could play anything, he was excellent in the blues,” said pianist, composer, and educator at the New School Jimmy Owens. “We played together many times over the years. Most memorable was our duo performing the music of Duke Ellington for Pastor Greisel at St. Peter’s Church. Following our performance the pastor told us it was the greatest he had ever heard.”

From 1990 to 2009 Mance was part of a group called “100 Gold Fingers” which toured Japan every other year. The rotating line-up of pianists included  Monty Alexander, Geri Allen,  Kenny Barron, and Tommy Flanagan.

Other than Washington, Mance accompanied a string of singers over the years, including Carmen McRae, Joe Williams and Johnny Hartman. He was a favorite on the jazz cruises and had a large following in Europe and Japan.

“Living in Chicago, that was Bluesville,” he told Newsday in 1987. “There were people around like Muddy Waters, Bo Diddley, Memphis Slim; boogie-woogie players like Jim Yancey, Meade Lux Lewis, Albert Ammons. When I was a kid, my mother loved the blues and bought nothing but blues records. When I started making gigs with horn players, I didn’t turn my back on the blues.”

Julian Clifford Mance Jr. was born Oct. 10, 1928, in Chicago and grew up in Evanston, Ill. His mother was a housekeeper and his father was a clothes presser and played some as a pianist. Mance was age five when he began playing piano tunes, and his father taught him stride piano and boogie-woogie tunes. His first gig came at the age of 10, when the upstairs saxophonist asked the elder Mance if Junior could sit in for his sick pianist at the roadhouse where his band was playing.

As a teenager, Mance played the local Chicago clubs, before entering Roosevelt College in Chicago (now Roosevelt University). Although his mother wanted him to become a doctor, he registered for music classes. The school’s music curriculum was so strict he was suspended for a week for practicing jazz instead of classical music. He remained in college for over a year before joining Gene Ammons’s band.

In 1951 Mance was drafted into the Army, training in the infantry unit at Fort Knox, KY. While on guard duty one night he went to investigate music he heard coming from a service club. Upon entering the club he saw a band led by alto saxophonist Cannonball Adderley, who was also stationed at the base. Excited about seeing the band, Mance still wearing his helmet and fatigues, asked if he could sit in on piano. Adderley reluctantly agreed and once Mance started playing the band members were patting their feet and groovin’. Adderley was so moved, the next day he assisted in Mance’s transfer out of the infantry into the Army band and becoming the company clerk. Many members of his previous infantry unit were killed in battle during the Korean War.

“I sort of think that Cannonball might have saved my life,” he said in the Hamilton College interview. “If it weren’t for him, I might not be here.”

Mance returned to Chicago in 1953 after his Army discharge and joined the house band at the Beehive where he accompanied musicians like Coleman Hawkins and Charlie Parker. The following year he did a two-year stint with singer Dinah Washington. He then spent two-years with Adderley’s quintet before moving on the join Dizzy Gillespie’s group in 1958, he toured and recorded several albums with him. He considered Gillespie a friend and mentor, helping to lead him in new musical directions.

“I used to play a lot of notes, going nowhere,” Mance told the San Jose Mercury News in 2004. “Dizzy called me one night and told me, ‘The sound of maturity in a musician is when he learns what not to play, what to leave out.’ That’s all he said, and it stuck with me.”

In 1959, the producer Norman Granz invited him to record his first album “Junior,” as a leader with bassist Ray Brown and drummer Lex Humphries. It was the first of more than 50 albums as a leader. Among his most notable were “The Soulful Piano of Junior Mance” (1960) and “Junior’s Blues” (1962), which is considered an innovative blending of blues with modern jazz. He spent the rest of his career leading small groups and recording albums for Atlantic, Capitol and Jazzland. His last two albums, both released in 2008, were “Groovin’ With Junior” and “Blue Minor.”

Fans and friends will remember his smile that could melt his piano keys and that soft voice of wisdom that always inspired. He will surely be missed but his music will linger for generations to come.

Mance was married four times. Survivors include his wife of 22 years, the former Gloria Clayborne of New York; a stepdaughter from his second marriage, Gail Wilson; two stepchildren from his fourth marriage, Nadia King and Walter H. Jones III; four grandchildren; and a great-grandson.