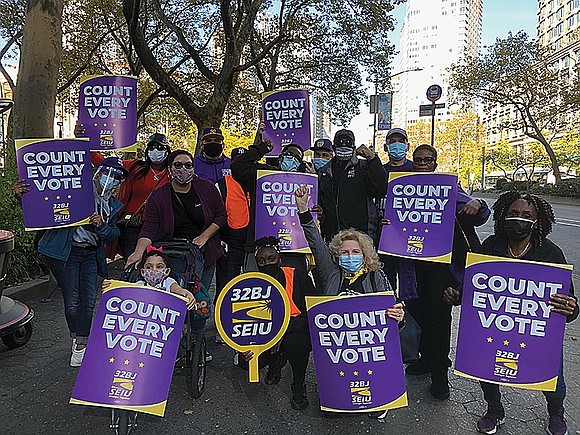 32BJ’s theme of 2020 was keeping what was theirs. Whether it involved the CARES Act, the HEROES act (both addressing some economic relief to workers hit financially by the COVID-19 pandemic), passing immigration reform, a $15 minimum wage and the push to elect Joe Biden, the union’s work was never done.

After a busy, tumultuous and challenging year, 32BJ welcomed new leadership to help in the battle for workers’ rights.

Candis Tolliver, the union’s current political director, will remain vice president having taken over in the fall of 2020. As a political director, she helped “pass minimum wage increases, voting rights expansions, fair scheduling, a cap on for-hire vehicles, the farmworker bill of rights, driver’s licenses for the undocumented, paid family leave and criminal justice reform laws.”

Tolliver oversaw the Just Cause legislation and the Healthy Terminals Act that provided health care to airport workers.

Tolliver also helped in the effort to get out the vote and push Joe Biden past Donald Trump in the 2020 presidential election. Tolliver didn’t mind adding more responsibility to her plate.

“I am happy to expand my leadership role with the union so that I can continue to fight and win on behalf of working people,” said Tolliver. “Being a leader at 32BJ is a natural progression of my career spent fighting for racial and social justice and holding the powerful accountable. I’ve always wanted to be a change agent—I am proud to be doing that now.”

32BJ President Kyle Bragg felt Tolliver’s ability in becoming the voice of his constituents was a key factor in making his post permanent.

“Candis has the pulse on our members’ needs and how to best engage them in the political process in order to achieve electoral and legislative victories that lift up their communities,” Bragg stated.

In addition to Tolliver, Manny Pastreich is the new secretary treasurer. Having taken over the position for Larry Engelstein, Pastreich’s post-retirement gig will bring a lifetime of organizing experience including the Justice for Janitors campaign and the United Farm Workers’ strawberry worker organizing campaign.

“It is an honor to fill this role at the union,” said Pastreich in a short statement. “At SEIU 32BJ I work alongside leaders, co-workers, and members who are fighting to make our worksites better and our communities stronger.”

Rochelle Palache assumed the vice president for Connecticut position; its previous owner, Juan Hernandez, retired. Palache brings over a decade of experience in organizing and activism and has worked as a political director and assistant district leader. Bragg mentioned how Palache’s journey to the union (she immigrated from Jamaica to Hartford, Conn.) shows in her work.

“Like the majority of the union’s membership, Rochelle immigrated to the U.S. for a better life, and her successful rise through the union makes her a true inspiration,” stated Bragg.

Bragg said Devita’s “extensive experience in leadership roles will help NCFO members and their families thrive in a rapidly changing industry and landscape.”