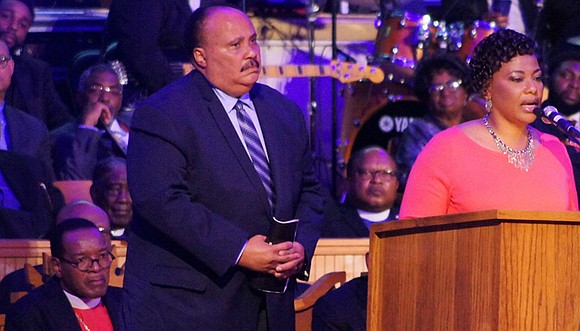 Rev. Bernice King (right), with her brother, Martin Luther King III, at her side addresses, the 3,000-plus crowd at Mason Temple in Memphis during the Mountaintop Speech Commemoration on April 3, 2018. Also pictured, Presiding Bishop Charles E. Blake Sr. of the Church of God in Christ. Tyrone P. Easley/The New Tri-State Defender

Last Thursday, Feb. 11, the Mexican government announced that Martin Luther King III would be traveling to the state of Oaxaca to take part in the 190th year commemoration of the death of one of Mexico’s founders, Vicente Guerrero.

It was a surprise to Oaxaca’s native Afro Mexican population. King, son of the famed U.S. civil rights icon Martin Luther King Jr., was to join Mexico’s President Andrés Manuel López Obrador on Sunday, Feb. 14 at the site in Cuilápam where Vicente Guerrero had been executed on Feb 14, 1831.

López Obrador had been scheduled to visit the site of Guerrero’s execution to mark the commemoration of the Mexican War of Independence. The addition of Martin Luther King III to the trip was a welcome surprise for local Afro Mexican activists who have been working for the last few decades to promote community pride and national recognition of the nation’s African descendant history.

Isidro López Ramírez, president of Socpinda A.C (Organization for the Social and Productive Development of Indigenous Peoples and Afro-Descendant Communities), took to Facebook to send a message of welcome and appreciation for King III’s visit to Oaxaca, a state where 4.95% of the population––some 178,555 people––self-identify as Black.

“We are a legally recognized people now,” López boasted by pointing to Mexico’s 2020 Census, which was the first time Mexico allowed citizens to identify as Afro Mexican, Afro-descendant or Black. Official numbers showed that there are 2,576,213 million people—2% of Mexico––who claim to be of African descent. “This means we have certain rights and we have the power to demand people respect our rights.

“There are Afro Mexicans in every state of the nation. But we also have to be honest and we have to say that many of us do not know our ancestors––and our ancestors in Mexico gave their lives and freedom to get us to this level.”

Vicente Ramón Guerrero Saldaña took office April 1, 1829 as Mexico’s second president and only served until December 1829. In his short period as Mexico’s leader, one of Guerrero’s most significant acts was his September 15, 1829 decree abolishing slavery throughout the Republic of Mexico. Mexico abolished African slavery three decades before the United States of America and the Guerrero decree led thousands of enslaved Blacks in the U.S. to flee to Mexico and freedom.

Politicians in opposition to the end of slavery and other Guerrero policies later abducted and executed him by firing squad in Cuilápam.

Sacrifices by people like Guerrero, by the mid-16th century slavery rebel leader Gaspar Yanga, by independence movement priest José María Morelos and other Afro Mexicans need to be acknowledged locally and internationally, and having Martin Luther King III in Oaxaca was an extraordinary opportunity to showcase the Afro Mexican population, Socpinda’s López said, and to once again push for the community to be fully visible.

For his part, MLK III used his commemoration speech to address Mexico, Guerrero, and Afro Mexico: “Today we gather on the site where Vicente Guerrero was betrayed and assassinated with a spirit of solemnity and abiding respect,” King said.

“In addition to his great love for his country President Guerrero was a giant of Mexico’s abolitionist movement who fought tirelessly to end slavery in the country he loved. As an Afro Mexican, he experienced racial discrimination and racial injustice but he provided an eloquent voice and a vision for freedom and dignity for all Mexican people regardless of their racial and ethnic heritage. … I thank you, Mr. President, for keeping President Guerrero’s legacy alive and for carrying forward his struggle for equality and justice in the 21st century. I think that it’s wonderful that a great Mexican leader of African heritage is being recognized during Black History Month. Our societies in both Mexico and the United States are greatly enriched by the contributions of many different racial and ethnic groups. Of course I was overjoyed when the United States elected our first Black president, Barack Obama, in 2008. And I’m very encouraged that we now have a Black woman as vice president, Kamala Harris. But I was also delighted to learn that Mexico had a president of African heritage, Vicente Guerrero, 170 years before the U.S.”

The Oaxaca-based Afro Mexican feminist group MUAFRO penned an open letter to Mexico’s president following the Guerrero commemoration event. MUAFRO urged López Obrador to include Afro Mexicans in policy decisions taking place in the country. “It’s imperative that the government guarantee the true exercise of our fundamental rights like access to health care––especially in the current period of this pandemic––and that it decisively combat racism and discrimination which tears at our dignity.

“Today we celebrate a great Afro Mexican, tomorrow we hope to celebrate the true inclusion of Afro Mexicans in the history and in the future of our country. Vicente Guerrero famously said ‘my country comes first’ but it must be a country that includes each and every one of us. Instead, 500 years after the forced arrival of the first Africans in this country, their descendants are still waiting for true justice.”