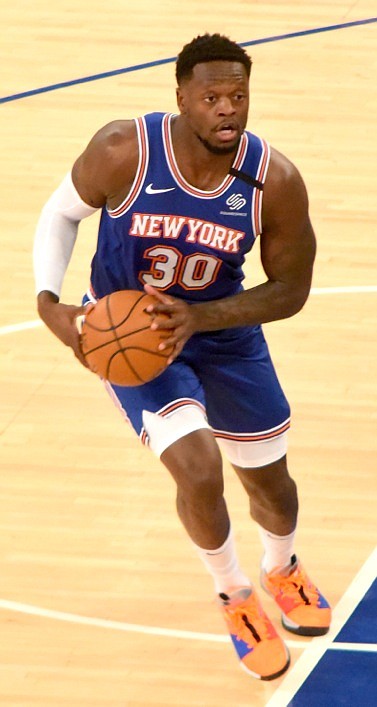 Julius Randle put an exclamation point on his spectacular performance at Madison Square Garden on Monday night by draining an improbable, off-balance, 26-foot three-pointer in front of the Knicks’ bench with three minutes and 18 seconds remaining in the game.

The Knicks were up by only 109-107 before Randle’s clutch shot and it was the closest the Atlanta Hawks would get. The 6-foot-8 forward would go on to add a short jumper and two free throws to bring his point total to 44 in leading the Knicks to a 123-112 win. The showing was another case for Randle being named an NBA All-Star for the first time in his seven-year career.

Prior to the Knicks facing the Magic in Orlando last night, they were 14-15 and sixth in the Eastern Conference with Randle’s per game averages of 23.1 points, 11 rebounds and 5.6 assists the best on the team. He was also logging 36.7 minutes, second most in the league behind James Harden, who was at 37.7 when the Nets played against the Phoenix Suns on Tuesday night.

“What else does he have to do?” Knicks guard RJ Barrett said rhetorically after the game, the team’s third straight win. “The man’s an All-Star.”

It would be difficult to present a compelling argument opposing Randle’s selection by the league’s head coaches, who determine the remaining squad after starters are chosen by balloting composed of fans (50% of the vote), media (25%) and current players (25%) for the March 7 game in Atlanta.

Last season, Randle’s first with the Knicks, was another step in his progression after a breakthrough 2018-’19 campaign with the New Orleans Pelicans in which he averaged 21.4 points and 8.7 rebounds in 73 games. After being signed by the Knicks as a free-agent in June of 2019 to a three-year, $63 million deal by former franchise president Steve Mills, he was viewed by many as a serviceable, short-term option in the Knicks’ rebuild after they failed to secure their main targets, Kevin Durant and Kyrie Irving.

Randle, who was a Third-Team All-American in his one year at the University of Kentucky before being drafted with the 7th overall pick by the Lakers in 2014, topped the Knicks in scoring (19.5), rebounding (9.7) and assists (3.1) in 64 games in last season’s COVID-19 shortened schedule. Yet he still had naysayers assessing his skillset to be more complementary than influential, a good piece but not a first, second or even third option on a playoff team.

This season, the 26-year Randle has quieted a significant number of his skeptics. He had already proved to have the mental fortitude to withstand criticism and overcome adversity. In his first NBA game, Randle broke his right tibia 14 minutes in and missed the rest of the season. He came back to play in 81 of the Lakers’ 82 games the following year.

Randle has surpassed that goal. “The most important thing is the impact that he’s having on winning and hopefully it’ll be recognized,’’ said Knicks head coach Tom Thibodeau. “I know there’s great appreciation by his teammates and his coaches, the organization, certainly our fans, for what he’s bringing to our team.”