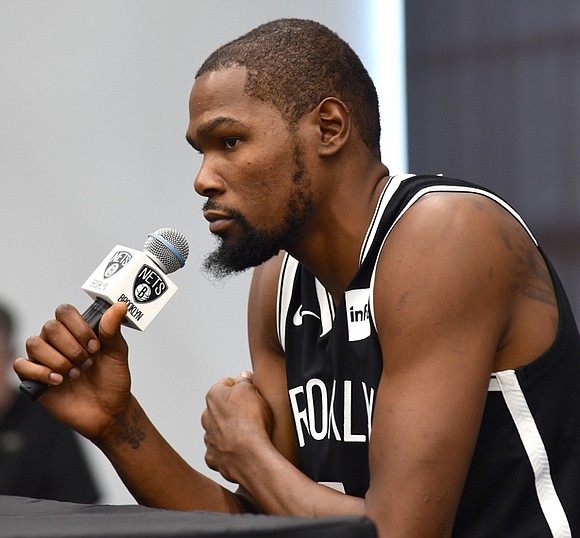 The Nets’ three superstars continue to show they can effectively coexist and most importantly translate their superior talent into wins. But self-imposed absences by Kyrie Irving as James Harden’s tenure with the team began, COVID protocols that kept Kevin Durant out for parts of one game and for two full games, and injuries to Irving and Durant have been an impediment to the trio being on the court together consistently.

Durant returned last Saturday to face the Golden State Warriors after being removed in the third quarter from the Nets’ 123-117 loss against the Toronto Raptors Feb. 5 due to contact tracing. He was inactive for the Nets’ next three games, a span in which they went 1-2, before scoring 20 points against his former team in a 134-117 Nets rout.

However, Durant suffered a mild left hamstring strain and was unavailable in the Nets’ 136-125 win over the Sacramento Kings on Monday and did not play Tuesday night in Phoenix where the Nets faced the Suns. Irving was also out due to back tightness. The Nets were 17-12, third in the Eastern Conference, before the Nets met up with the Suns. Irving has missed 10 of the Nets’ 30 games. Durant has been out 11. Harden has appeared in all 15 games with the team since making his Nets debut Jan. 16 after being acquired in a trade with the Houston Rockets.

The Nets face LeBron James and the Los Angeles Lakers—minus Anthony Davis, who’s hobbled by a right Achilles injury—tonight, Feb. 18, and the Los Angeles Clippers on Sunday to conclude a nine-day, five-game West Coast road trip, their longest excursion so far this season. It began for Durant as a return to face the Warriors in their new home in San Francisco, the $1.4 billion Chase Center, where they began play last season.

Durant won his two NBA championships and Finals MVPs with the Warriors in 2017 and 2018 when they were still playing at the Oracle Arena in Oakland. He was welcomed back by his former team with a video tribute during a first quarter time out. Durant described it as “cool” and was reflective of his three seasons with the franchise.

“I think about those moments daily,” he said. “Every single moment that I’ve had in this league, I think about.”

The Nets will host the Kings at the Barclays Center next Tuesday in their first game at home this season in which fans will be in attendance. There will be a 10% fan capacity limit for the 17,732 seats the arena offers for basketball games.