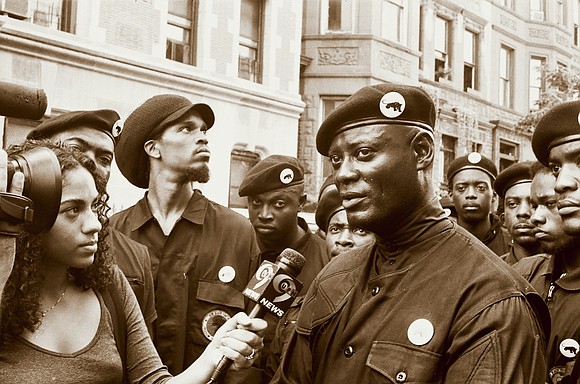 Wednesday, Feb. 17 was the 20th anniversary of Dr. Khalid Abdul-Muhammad joining the ancestors at the age of 53. For a significant portion of his adult life he called Harlem home, residing and conducting seminars at various locations here.

He served as minister of the Nation of Islam’s Mosque #7 when it was located at 2033 Fifth Ave. from the late 1980s until he was ousted from them after his volatile Nov. 29, 1993 speech at Kean College titled “The Secret Relationship Between Blacks & Jews.” He then headed the New Black Panther Party, which was founded by Aaron Michaels, and resided in a brownstone on Harlem’s Strivers Row.

While serving in both positions he reached out to New York’s aimless, inner-city youths whose communities were being ravaged by the torrid crack epidemic. Several local Five Percenters joined him, including Pharaoh Allah and Watesha Earth.

“The best way to fight an oppressive and alien culture is to live your own!” Dr. Khalid assessed.

“Dr. Khalid was influential to the youth because he came at a time when we didn’t really have anything. We didn’t have any structure or unity because of the biological warfare called ‘crack,’” affirmed Shaka Shakur, former NBPP member. “He not only put the manhood back in Black men, he also gave us the sense of self-worth.”

The revolutionary aspects of hip hop culture embraced the Truth Terrorist wholeheartedly, with such progressive artists as Ice Cube and Public Enemy sampling him prominently. He also aligned with the Bronx’s Universal Zulu Nation.

“One man’s terrorist is another man’s freedom-fighter,” Dr. Khalid rationalized.

On Sept. 5, 1998, Khalid orchestrated the Million Youth March along Harlem’s Malcolm X Boulevard. The peaceful event was interrupted by low-flying NYPD helicopters, and thousands of cops on foot, in vehicles, riding horseback and motorcycles rushed the event. Khalid grabbed the mic, called for calm, exhorting participants to peacefully disperse…but, to defend themselves—“By any means necessary!”—if attacked by the police.

Shakur reflected: “He single-handedly defeated the machine run by Guiliani. That’s a major victory. You have a system that had the nerve to tell the youth that they couldn’t speak out, and Dr. Khalid being the person that he was, not only went to bat for the youth, he stood through it all: the altercations and courts, and defeated them all around the board!”

Although there’s much speculation surrounding his passing, with private investigations not providing solid answers, Khalid’s efforts continue through the many lives he’s influenced. Kem-Neter, NBPP minister of information, commented: “Dr. Khalid was the epitome of Black manhood. An uncompromising Black Nationalist and messiah of our time!”

In the immortal words of the Truth Terrorist himself: “Revolution is the only solution!”