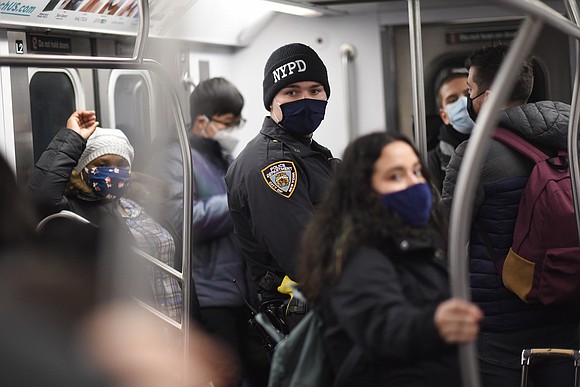 An example of just how bad crime is in the subway played out last weekend when police say a man went on a killing spree leaving two people dead.

The NYPD said that on Feb. 13 police arrested 21-year-old Rigoberto Lopez, who is homeless and mentally ill, at Audubon Avenue and 186th Street in Manhattan. Lopez confessed to stabbing four people in over 14 hours on the A subway line.

Two people were injured and two were killed during the spree. One of the victim’s bodies, 44-year-old Claudine Roberts, was discovered on a train at the 207th Street station. Reports indicate she was stabbed seven times. A vigil was held for her on Monday.

Law enforcement officials said that Lopez was found to be in possession of a knife when he was arrested. He was charged with three counts of murder and two counts of attempted murder.

Lopez’s prior arrests include drug possession, assaulting an officer and criminal contempt. He went under a psychiatric evaluation before being placed in jail with no bond for his latest crimes.

Last weekend, there were four people in separate incidents caught by police with sharp objects in the transit system. All were on the A train line.

While ridership is down by 70% due to the COVID-19 pandemic, this is the latest in what appears to be a spike in crime in the New York City subway system. Assaults are up a reported 25% and range from stabbings, slashings, people being pushed on subway tracks and sexual assaults.

Some recent incidents include a woman riding a train in Brooklyn who was sexually violated this week, a 54-year-old woman who was shoved on the tracks at the 174th Street station in the Bronx, and a man who was punched and stabbed by a suspect at the Christopher Street station in Manhattan. All of the attacks were random.

During a press conference, NYPD Commissioner Dermot Shea announced that more officers are being assigned to the subway system. Gov. Andrew Cuomo recently announced that starting next Monday, overnight shutdowns for subway cleaning will be from 2 a.m. to 4 a.m. The system was previously shut down from 1 a.m. to 5 a.m.

“We will immediately commence a surge of officers to patrol both above and below ground to ensure that everyone who rides our transit system on a daily basis not only is safe, but just as importantly, feels safe,” Shea said. “This surge will result in an additional 500 officers, which is a significant increase to the staffing of our transit bureau.”

Mayor Bill de Blasio said during a press briefing this week that the subways are safe and that he feels safe riding the train himself.

“The NYPD believes this’ll be the difference maker,” he said. “We had a horrible, tragic crime and everyone’s paying attention to that, and we cannot let things like that happen, but we also have seen overall crime in the subway has gone down for years, thank God, and even the first six weeks of this year, compared to last year a 59% decline overall.”

Many officials are attributing the rise in violent crime on the subway to the rise of homeless people in the public transit system. They also say there’s a lack of mental health services.

At a press conference led by Council Member Ydanis Rodriguez, who chairs the City Council’s Transportation Committee, and Brooklyn Borough President Eric Adams, officials outlined a plan to deal with those suffering from mental illness. The plan includes expanding social services and coordinating with police and eliminating the need for an address when making complaints to 311.

“One thing is clear. Our current approach to handling suffering subway crime isn’t working. It is failing. We need to immediately rethink our outreach program, and that’s why today we are calling on a four point plan to address this crisis,” Adams said. “We need to be ahead of the problem, and not responding to the problem.”

In a joint statement from TWU Local 100 President Tony Utano and NYCT President Sarah Feinber, both said the recent attacks are “outrageous and unacceptable.”

“Every customer, and each of our brave, heroic transit workers deserve a safe and secure transit system,” the statement said. “We have been calling on the city to add more police to the system, and to do more to assist those who desperately need mental health assistance. The time for action is now.”