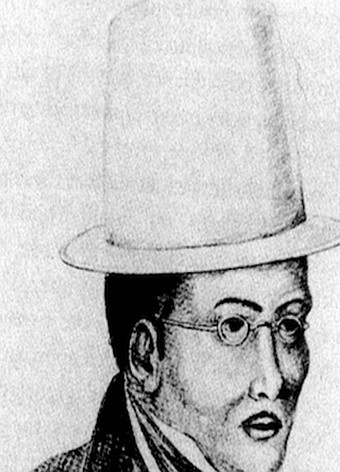 David Ruggles was born free on March 15, 1810 in Lyme, Connecticut, but few matched his commitment to end slavery in this country. David was very young when his parents, David Sr. and Nancy, moved to Norwich with a residence in the tony neighborhood of Bean Hill. His father worked as a blacksmith and woodcutter, and his mother was a popular caterer; even so there’s faint possibility that their income was equivalent to those around them.

Coming of age in the community, David, the oldest of eight children, was soon recognized as a prodigy, excelling at Sabbath Schools. Residents of Bean Hill were so convinced of his intelligence that money was raised for a tutor to teach him Latin. He was 16 when he moved to New York City, a year before slavery was ended in the state, and he worked as a mariner before opening his grocery store. It was a neighborhood with a number of enterprising African American businessmen and women, including Mary Simpson. Among the notables who resided in this lower Manhattan area, called Golden Hill (John Street east of William Street) was Sojourner Truth, later to become the preeminent abolitionist.

Liquor was among the items David sold, but this practice came to an end after he joined the temperance movement and the free produce movement. Highlighting his involvement in the anti-slavery movement was his role as a sales agent to William Lloyd Garrison’s The Liberator newspaper and other abolitionist journals. Having closed his grocery store, David opened what is reputedly the first African American-owned bookstore in the U.S. It was located on Lispenard Street near St. John’s in what is today the Tribeca neighborhood.

The store was a beacon for those interested in abolitionist and feminist literature, and the famed writer and abolitionist Maria Stewart’s works were among the bestsellers. David ran his bookstore with zeal and some prosperity, and that provided him the wherewithal and impetus to get more involved as a journalist, editing The Mirror of Liberty. He also published The Extinguisher, a small pamphlet. Like another noted abolitionist David Walker, Ruggles wrote and published “The Abrogation of the Seventh Commandment,” in 1835, five years after Walker’s mysterious death. His appeal, unlike Walker’s, demanded that northern women confront their husbands who kept enslaved Black women as mistresses.

His prominence as an abolitionist soared with each passing year, especially after he became secretary of the New York Committee of Vigilance, a radical organization whose mission was to guarantee the safety and security of runaway fugitives from slavery. By this time New York had abolished slavery, and David and his associates assured those seeking asylum from bondage were protected in the state. Among the most illustrious of these fugitives who came under the care and concern of David was Frederick Douglass, who arrived in the city in 1838. He assisted Douglass in his reunion with his beloved, Anna Murray. They were later married by another former fugitive from the South, the Rev. James Pennington. “I had been in New York but a few days,” Douglass recounted in his first autobiography, “when Mr. Ruggles sought me out, and very kindly took me to his boarding-house at the corner of Church and Lispenard Streets. Mr. Ruggles was then very deeply engaged in the memorable Darg case, as well as attending to a number of other fugitive slaves, devising ways and means for their successful escape, and, though watched and hemmed in on almost every side, he seemed to be more than a match for his enemies.” The Darg case was a complicated one that centered on John Darg, a slaveholder, and Thomas Hughes, a man he held in bondage. Long story short, David got a raw deal in his fight to liberate Hughes, and, in fact, spent two days in jail that was to exacerbate his rapidly declining physical condition.

Despite his failing health, losing his eyesight and under attack for allegedly making money by blackmailing former slaveholders, David continued his work on the emancipation and protection of fugitives from slavery. As a member of the Vigilance Committee, he insisted that these fugitives had a right to jury trials and he helped provide them with legal assistance.

Not a day passed in which David wasn’t assailed by his enemies, some of them from citizens who on other occasions were allies, such as Samuel Cornish, a founder of the first African American newspaper. Cornish was among those antagonists who took exception to David’s tactics and leveled charges of his being less than honorable in his dealings with runaways. After his bookstore was burned down, he reopened it but continued to meet with adversity, and even an attempt to kidnap him.

Following the death of his father in 1841, David’s health became increasingly precarious and being nearly blind limited his activities. Fortunately, Lydia Maria Child, a noted white abolitionist, came to his aid and secured living accommodations for him in a utopian commune in Massachusetts. The popular treatment of hydrotherapy improved his health to some degree, though he remained sightless.