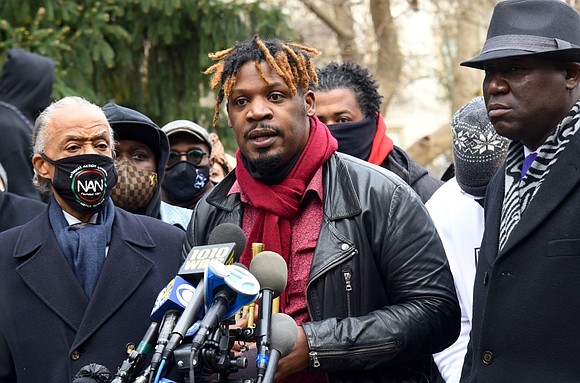 The parents of Black 14-year-old Keyon Harrold Jr. are making their voices loud and clear after the arrest of the 22-year-old white woman who attacked their son over false accusations that he stole her cellphone: “All we want to do is take the chains off.”

After weeks of evading police and doing media interviews, Miya Ponsetto, the women accused of attacking Harrold last month at a SoHo hotel, was arrested last Thursday near her home in California. Reports indicate she resisted arrest.

Ponsetto was extradited and held without bail. She faces charges including attempted assault, attempted robbery, grand larceny and endangering the welfare of a child. Ponsetto has not been charged with a hate crime. She is now back in California.

The arrest stems from a viral video of an incident where Ponsetto was seen at the Arlo Hotel on Dec. 26 attacking the son of jazz trumpeter Keyon Harrold Sr. Ponsetto accused Harrold Jr. of stealing her iPhone and even got hotel management involved.

In a surveillance video, Ponsetto is seen tackling Harrold to the ground still convinced that he has her phone. It was eventually discovered that Ponsetto left her phone in an Uber and it was returned.

After Ponsetto’s arrest, Harrold’s parents held a press conference with Rev. Al Sharpton and attorney Benjamin Crump on Monday. They say their son is suffering mentally from the situation.

“I can’t hug him from the back without him cringing,” said Kat Rodriguez, Harrold’s mother. “He actually asked me not to affectionately touch his back or shoulders. I ask Miya today if she has any idea what she has done?”

The family, along with Sharpton and Crump, are also calling for a boycott of the Arlo Hotel and their properties. They say the video shows that hotel management sided with Ponsetto before knowing anything about the situation. Arlo parent company Quantum Global operates several hotels across the country in New York, Chicago and Florida.

“We want accountability for everybody who allowed this injustice to happen against this child,” Crump said. “We want to make sure that the Arlo Hotel and their parent company understands that individual acts of racism are empowered by institutions like police and corporations like the Quantum Hospitality LLC.”

Arlo has yet to respond about the boycott. They previously released a statement apologizing for the incident stating, “No Arlo guest––or any person––should be subject to this kind of behavior.”

Just hours before her arrest, Ponsetto and her attorney Sharen Ghatan appeared on “CBS This Morning” for an interview with Gayle King to tell her side about what happened. While she apologized, she appeared unremorseful claiming she’s “traumatized.”

“Yeah, and I’m sorry. I’m sorry from the bottom of my heart. He is honestly—he’s 14? That’s what they’re claiming? Yeah. I’m 22. I’ve lived probably just the same amount of life as him,” Ponsetto said. “Like, honestly. I’m just as a kid at heart as he is. I feel sorry that I made the family go through, like, all of that stress. But at the same time, it wasn’t just them going through that.”