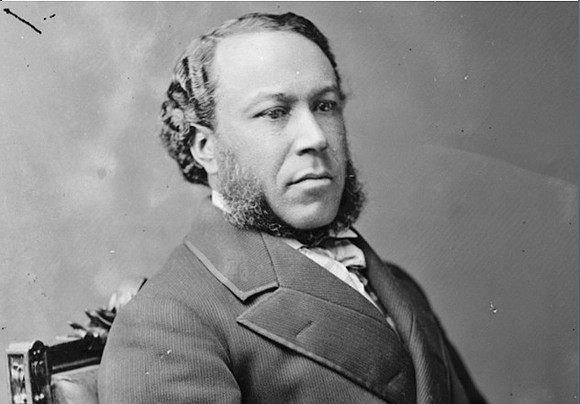 America’s simmering discord, its factions of democracy and intolerance ever at odds, exploded last week in mob violence at the Capitol Building. Was this but a momentary flicker of discontent or the harbinger of something even more cataclysmic during President Joseph Biden’s inauguration?

The recent disturbance brought to mind another Joseph, this one Joseph Rainey, who served nine years as U.S. Representative from South Carolina. He was the longest serving Black member in Congress at that time which came to an end with the overthrow of Reconstruction.

Rainey, of mixed ancestry, was born into slavery in 1832 in Georgetown, South Carolina. His father, Edward Rainey, also enslaved, was allowed to work as a barber, which he did quite successfully. His mother, Grace, was of African and French descent with ancestors from Haiti, arriving in the states after the revolution there. By 1840, Edward had amassed a considerable sum of money, enough to purchase his freedom; his wife’s and his two sons. Like his father, Joseph became a highly successful and popular barber, a trade that put him into direct contact with the community.

During a trip to Philadelphia in 1859 he met and married Susan, a free woman, who like his mother was of African-French descent. Soon, they were residing in South Carolina, where their three children—Joseph II, Olivia and Herbert––were born. Two years later, after the outbreak of the Civil War, Rainey was among the free Blacks conscripted by the Confederates to construct fortifications in Charleston. Later, he worked as a cook and laborer on ships assigned to block the entry of enemy ships.

With the war raging, Rainey and his family escaped to Bermuda, settling in St. George and he quickly established himself as a barber and his wife opened her shop and acquired a reputation as a fine dressmaker. In 1865, the town where they lived was beset with a serious and deadly outbreak of yellow fever forcing them to relocate to Hamilton. Rainey resumed his tonsorial practice in a local hotel where he also worked as a bartender, serving mostly white customers. From these customers his reputation spread and soon he was among the most popular barbers in town.

After the Civil War ended, Rainey and his family returned to South Carolina in 1866, once again settling in Charleston. According to the census of 1870, the Black population of the city had grown to represent 43%, including mixed race residents like Rainey. His accumulation of wealth and prestige helped to establish him as a leader in the community and gave him the impetus to enter politics. His entry into the political arena began when he joined the executive committee of the state Republican Party. Three years later, in 1868, he was a delegate to the state constitutional convention.

In 1870, he was elected to the South Carolina Senate and subsequently chair of the Finance Committee. Later that year, he won a special election as a Republican to fill a vacancy in Congress, a vacancy created when the House refused to seat an incumbent charged with corruption, though re-elected. Rainey was re-elected and served four terms, the longest for an African American representative until William Dawson of Chicago surpassed him in the 1950s. Like his fellow Black legislators, Rainey supported the Enforcement Acts to suppress the violent activities of the KKK. He was a commanding legislator and his speeches on the floor of Congress were instrumental in the passage of the Civil Rights Act of 1875. It was said that he wasn’t that much concerned with “social equality,” but this was belied by comments to the contrary.

When the attacks on Black people increased across the South and Reconstruction in its death throes, Rainey felt it was time to secure a residence beyond Charleston and purchased a summer home in Windsor, Connecticut. Since he was still a representative from South Carolina this location could not be his permanent residence but was a suitable home for members of his family. His visitations to Windsor were frequent enough to secure him longstanding recognition in the city and later to have a historic site, the “Joseph H. Rainey House” named in his honor, which is now among the 130 stops on the Connecticut Freedom Trail.

Meanwhile, there was no surcease in his dedication to the livelihood of his constituents in South Carolina or other parts of the southern economy, and in 1874 he became the first Black American to preside over the House as Speaker pro Tempore. His presence was crucial in the passing of the $18 million civil service appropriation bill in 1878.

While the KKK had been relatively subdued, other right wing white supremacist groups emerged to wreak havoc on Black lives and in some places moving against state capitals much in the manner of what the nation witnessed last week in D.C. Six Black people were murdered in 1876 during the Hamburg Massacre and 100 were killed by white paramilitary groups in Ellerton, both of which were located in Aiken County, South Carolina.

In 1878, two years after Democrats took control over the government in South Carolina, thereby supplanting the contingent of Black elected officials, Rainey warned President Rutherford B. Hayes of the violence that was intensifying and the reactionary push to suppress the Black vote. That same year, Rainey was defeated, and thus began the rise of Jim Crow and the spread of segregation. Within a decade or so, Blacks were totally disenfranchised across the South. Such would be this reign of terror until the Civil Rights Movement in the 1960s.

Upon his departure from national politics, Rainey was appointed a federal agent of the U.S. Treasury Department for internal revenue in South Carolina, a post he would hold for two years. When this ended, he began a career in private commerce, including working in banking and brokerage in D.C.

In 1886, he returned to South Carolina, retired from public life, and died the following year in Georgetown, where he was born.