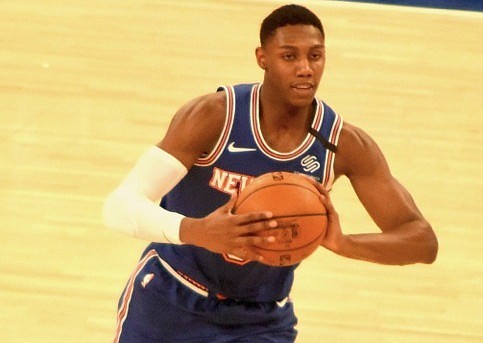 The Knicks’ 2020-’21 season will resemble the stock market. There will be peaks and valleys, winning streaks and stretches of consecutive losses. Periods of volatility and durations of optimism. It’s indicative of growth and development. The current Knicks are a new program under president Leon Rose and head coach Tom Thibodeau, devoid of a star that can carry them during times when the role players, of which the Knicks are wholly constituted, are laboring to collectively play well.

That’s the circumstances they faced heading into last night’s (Wednesday, Jan. 13) game against the Brooklyn Nets at Madison Square Garden. After winning three straight to raise their record to 5-3, the Knicks had lost three in a row for a mark of 5-6.

Offense has been at the root of their reversal. During their three-game winning streak,the Knicks averaged 110. 3 points per game. In the three loses that followed, the Knicks scored 88 versus the Oklahoma City Thunder, 89 against the Denver Nuggets and 88 in their meet-up with the Charlotte Hornets on Monday. No one has epitomized the Knicks’ offensive inconsistency more than second year guard RJ Barrett.

Playing extended minutes in Thibodeau’s rotation, the 20-year-old Barrett, who was leading the league in minutes played at 37.9 at the start of last night’s game, had scored 19, 9 and 11 respectively in the Knicks’ three-game slide. Barrett’s struggles began against the Utah Jazz a little over a week ago when he shot just 4-14 for 9 points in a 112-110 Knicks victory. In the two games prior to the Jazz, Barrett put up 25 against the Indiana Pacers on Jan. 2 then registered 26 versus the Atlanta Hawks two nights later.

After going 5-18 in Charlotte, Barrett was shooting just 36.5% overall and a troubling 18% on three point attempts. Before the game, Thibodeau said he is confident Barrett’s shot will gradually improve as he continues to contribute in other areas.

“I think it will eventually come,” he predicted. “I think as long as he’s taking the right ones, it’s a big part of the NBA game, I think, understanding the value of those shots.

“But there are a lot of other things he does well…He can post the ball, he can drive the ball well. And I think as time goes on he’ll shoot the ball better and better from the perimeter.”

Barrett assumed a positive posture after the Knicks fell to the Hornets 108-99.

The Knicks will be on the road to face the Cleveland Cavaliers tomorrow, Jan. 15, and Boston Celtics on Sunday, and return home Monday to host the Orlando Magic in their annual Martin Luther King Jr. Day game.