The Year in Review in Black Theater, Part 1 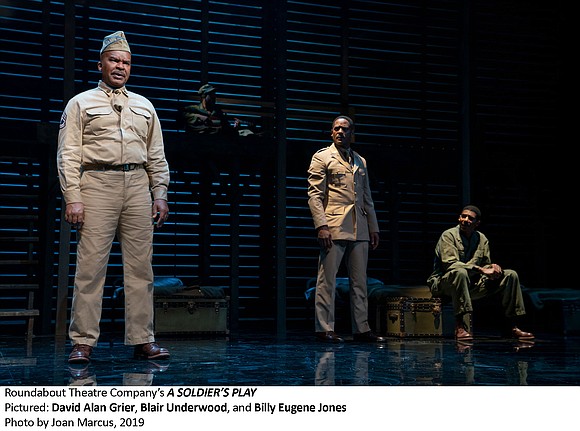 Never in my 36 years as a journalist and theater critic covering Black theater have I seen a year like 2020. COVID-19 shut down theater in mid-March 2020 and the world had to deal with a horrific pandemic, something I had never experienced in my lifetime. There was no Broadway theater, no off-Broadway theater and no Black theater. Show productions were suspended and countless people were out of work. Those in the theatrical business, whether a stage actor or technician, playwright or musician, were unable to practice their craft. It was a very dark time.

Theater, which has always been a means of enhancing our lives by telling us life lessons, making us laugh and inspiring us to dream, was abruptly halted. Shows that were running closed and shows that were in rehearsal never had the opportunity to truly get off the ground. But what 2020 also showed is the indelible spirit of human beings and the creativity of those in the theatrical business and their determination that by any means necessary the show must go on. Virtual theater began popping up all over the internet on YouTube, TodayTix and theater company websites, among other locations. People who had been sitting at home for months and unable to experience something creative and beautiful, were suddenly given some relief from their isolation at home and given the opportunity to be inspired, entertained and feel a sense of community.

2020 was also the year that Charles Fuller’s Pulitzer Prize winning play, “A Soldier’s Play” was finally brought to Broadway and played at the American Airlines Theatre on 42nd Street. This show played from the end of December 2019 through mid-March 2020. The Schomburg Center for Research in Black Culture featured the show in its Winter 2020 “Theater Talks: A Soldier’s Play” and presented a free event moderated by Michael Dinwiddie with a panel that had everyone thrilled and excited. It included Broadway director Kenny Leon and the two main stars of the play—which featured a mainly Black cast—Blair Underwood (who played Captain Richard Davenport) and David Alan Grier (who played Sergeant Vernon C. Waters). During the discussion the panel shared how important this play is and talked of their personal history with this story. The production itself was a theatrical masterpiece! The splendid cast took us to an army base in Louisiana in 1944 and introduced us to the angry, cruel Sargeant Waters and told us the story and investigation of his murder, revealing the storyline through flashback scenes as soldiers from this all-Black regimen were interviewed by Captain Davenport. This production was like watching a master class in what a dramatic Broadway production should look like and it featured a dynamic cast that included Underwood, Grier, Jerry O’Connell, J. Alphonse Nicholson, Nnamdi Asomugha, McKinley Belcher III, Jared Grimes, Billy Eugene Jones, Warner Miller, Rob Demery, Nate Mann and Lee Aaron Rosen.

February and March 2020 saw a one-woman show written and performed by a phenomenal female talent, Donnetta Lavinia Grays, called “Where We Stand.” The drama with singing played at the WP Theatre and it was amazing to watch Grays as she broke the fourth wall even before the production began, as she sat in the audience, who were waiting for the show to start. There was heart, appreciation, originality and a countless number of rhymed words that made your heart sing. The audience was encouraged to participate and they did with humming, singing and passing judgment. Grays displayed her deeply felt vocal gifts as she performed gospel songs with a tone you felt in your soul. “Where We Stand” taught the audience a lesson on where we stand as human beings and our cruel treatment towards each other through a fable-like storyline. Though the play taught life lessons it utilized a great deal of humor and Grays depicted a multitude of characters and personalities in the town—astonishing! The work had fantastic direction by Tamilla Woodard. It was presented by the Women’s Project WP Theatre 40 years in association with Baltimore Center Stage. David Ryan Smith performed the production instead of Grays at certain performances.

February/March 2020 saw the re-imagining of the Ntozake Shange’s production “a photograph/lovers in motion,” adapted and directed by her sister Ifa Bayeza and presented by the Negro Ensemble Company with music composed by David Murray. Shange used poetic language, dance and jazz music to express the strengths we have, our struggles, in some families a history of trauma and how that history can repeat itself in the next generation. The characters include Michael, a female dancer who loves dance and has a great regard for our ancestors. She also is very honest and appreciates honesty in others. She is in love with a Black man who is a photographer named Sean David. He is a man who enjoys controlling women and likes them to take care of him. Sean is this way because his father didn’t love him and used to bring prostitutes to the house for himself and his son. Sean has demons to deal with. Earl, Sean’s best friend, gets Sean’s leftovers when it comes to women, but is in denial of his attraction to Sean. Claire, a beautiful Black woman, goes to Sean for photos and sex and then there is Nevada, a successful lawyer who tries to win Sean’s appreciation by supporting him financially and helping his career. Actions which Sean greets with dismissal. This piece demonstrated Shange’s ability to put so many issues that grab at the heart in one story. The cast was captivating and included Imana Breaux, Adrain Washington, Marc Deliz, Mystie Galloway and Nya Bowman. It played at Theatre 80 at 80 St. Marks Place.

The early part of the year also was truly cooking with the sizzling, energized family drama “Stew” that played at the Walkerspace at 46 Walker Street and was presented by Page 73 Productions. It told the story of three generations of the Tucker family: the mother Mama, her daughters—Lillian (married) and Nelly (a teenager living at home) and Lillian’s daughter Lil’ Mama. These females were all in the kitchen making a stew for Mama’s church event. Mama was a spitfire who felt that her daughters ignored her and was ready to go at them when they returned home. This poignant play was written by Zora Howard. Howard dealt with how the family members felt neglected, avoided and vulnerable. The characters on that stage were very recognizable. The ensemble was mesmerizing and performed with pure passion. It included Portia as Mama, Niccole Salter as Lillian, Toni Lachelle Pollitt as Nelly and Kristin Dodson as Lil’ Mama. Colette Robert provided phenomenal direction.

Theater, ever innovative and resilient, found the need to exist in some form, even if it meant entertaining the public and trying to create a sense of community at a time when we were bound by the pandemic to remain in our homes and not physically invite others into our personal domain, unless they were immediate members of our household. Facing this dilemma The Billie Holiday Theatre in Brooklyn presented a #StayAtHome reading series online in April. Dr. Indira Etwaroo, executive director of the Theatre located in Restoration Plaza, realized the importance of theater in the Black community and found a marvelous way to entertain and inspire families in the comfort and safety of their homes. In a partnership with the Frank Silvera Writers’ Workshop, the theater launched the play-reading series bringing together writers, directors and actors from across the country from within their own homes via Zoom. The series began in March and featured readings of Richard Wesley’s “Autumn” and “50in50: Letters to Our Sons” with 11 Black women actors and 50 Black women writers from across the globe. “Reparations” by James Sheldon and directed by Michele Shay was performed on Facebook.

Not stopping there, The Billie Holiday Theatre also migrated classes for its Black Arts Institute, a partnership with Stella Adler Studio of Acting and NYU, as well as its Youth Arts Academy (YAA) to remote learning. Students were connected with each other and faculty through Zoom and maintained their normal class schedule to include Voice and Dialect, Movement Dance and Studio Rehearsal. YAA moved to distance learning utilizing weekly classes presented asynchronously by the faculty on Vimeo.

At a time when so many in theater were jobless and struggling, actress Kara Young, who had been part of “The New Englanders” in 2019, “Halfway Bitches Go Straight to Heaven” in 2019-2020 and was starring in “All The Natalie Portmans,” which was closed due to the pandemic, was appreciative of the opportunity to sit and talk about what her thoughts were about her and so many others’ situation in theater. Young shared how she and the cast of “All The Natalie Portmans” were abruptly informed that the show was closed. Young spoke of how she and other theater professionals were looking to pay rent, buy food and make ends meet. She explained that she applied for unemployment. Looking towards the future, Young tried to be positive as she said, “I don’t know how we will even come together and feel secure in community. We can however adapt, adapt to the ever-changing technology and ways for us to stay in communication, in community, to maintain a sense of purpose. Also, to attempt to use this precious time to create and blossom as artists in solitude.”

June 2020 saw Woodie King Jr.’s New Federal Theatre living in the new reality and offering free programming and live streaming. The program was called “Tuesdays in June 2020: Rapping with the Artists & Play Readings.” NFT offered seven live-streamed discussions and play reading events including: “Rapping with the Artists” which showcased a discussion with S. Epatha Merkerson, Barbara Montgomery and Ruben Santiago-Hudson; the next “Rapping with the Artists” featured J. Alphonse Nicholson and Howard Craft, who talked about the mounting of “Freight: the Five Incarnations of Abel Green.” The next part of the series featured director Petronia Paley and playwright Larry Muhammad, who talked about “Looking for Leroy.” Then came a reading of “Looking for Leroy,” performed by the original cast of Tyler Fauntleroy and Kim Sullivan, directed by Paley. The series also showcased playwright Bill Harris and actors Denise Burse-Fernandez and Guy Davis. Andre De Shields and Chuck Smith spoke about doing theater centered on historical figures. The final part of the series featured a play reading of Trevor Rhones’ “Two Can Play,” featuring Ron Bobb-Semple and Joyce Sylvester with direction by Clinton Turner Davis.