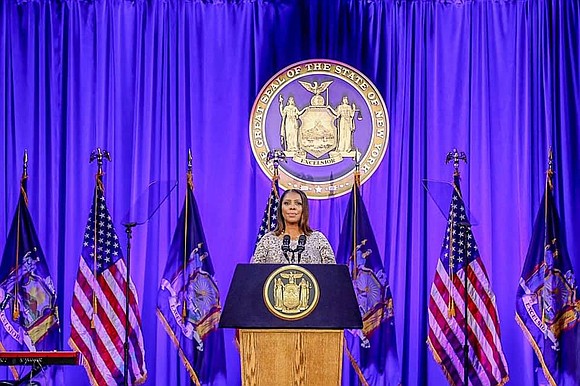 Violence at Black Lives Matter and anti-police brutality protests, which many believed to be peaceful, was allegedly instigated by law enforcement.

James said the lawsuit should prove that no one is above the law.

“There is no question that the NYPD engaged in a pattern of excessive, brutal, and unlawful force against peaceful protesters,” stated James. “Over the past few months, the NYPD has repeatedly and blatantly violated the rights of New Yorkers, inflicting significant physical and psychological harm and leading to great distrust in law enforcement.”

Activists and allies took to the streets to protest police brutality after the highly publicized deaths of George Floyd and Breonna Taylor. Marches around the country were met with force by the police who showed up in riot and military gear. Videos of police brutality at protests were circulated online and swiftly met with anger and dejection from activists.

“The repeated and excessive violence of officers against peaceful protesters who marched for racial justice after the killings of George Floyd and Breonna Taylor was appalling and inexcusable, and revealed serious, systemic issues in the department, including an ongoing failure to acknowledge wrongdoing or discipline illegal behavior from the top down,” said The Legal Aid Society and the New York Civil Liberties Union in a joint statement.

The complaint outlines a few incidents, such as Andrew Smith’s, during protests. During a demonstration in Brooklyn, Smith had his COVID-19 facemask pulled down and he was pepper sprayed in the face. Smith experienced a burning sensation in his eyes and face and “exacerbation to eczema” on his back hours after the incident. Another involved Luke Hanna who, during a June 3 protest, was struck in the back of the head with a baton that James said was “without provocation or justification.”

In the shadow of 2020, the suit didn’t go unnoticed by Communities United for Police Reform. According to CPR’s spokesperson and Brooklyn Movement Center Executive Director Mark Winston Griffith, it is high time the NYPD officers see repercussions for their actions.

“The attorney general and the City’s Department of Investigations and Law Department have all released reports with details of the horrific violence and abuse the NYPD perpetrated against New Yorkers last summer. But while government reports help affirm and expose what Black and other New Yorkers of color have long known, it's long past time for real action," said Griffith. CPR’s spokesperson also said that the city should look to communities of color as experts in combating police violence.

“Given our long experience suing the NYPD and organizing against police violence in this city, we know that lasting change from this litigation will require that organizations like ours—that are led by Black, Latinx and other communities of color who regularly experience police violence at protests and in our communities—are able to act as an independent counterweight to any monitor appointed by the court,” Griffith said.

The lawsuit also brings up “kettling,” where police surround and corner protesters giving them no space to disperse. One such incident happened during protests in the Bronx neighborhood of Mott Haven where protesters were hit with batons. Close to 250 people were arrested that night for violating de Blasio’s recently instituted curfew for the protests.

As a result of the police’s actions during the protests, multiple groups have praised the lawsuit. Unions have lent their support. 32BJ SEIU President Kyle Bragg said that James’ actions are necessary in the fight to keep all New Yorkers safe.

“As we have seen time and again, especially throughout widespread protests against racial injustice this past year, police forces such as the New York Police Department overreact, over-police and brutalize peaceful protesters,” stated Bragg. “The NYPD, one of the most resourced and militarized police forces in the world, has too often abused its power against our right to come together and speak out against injustice.”