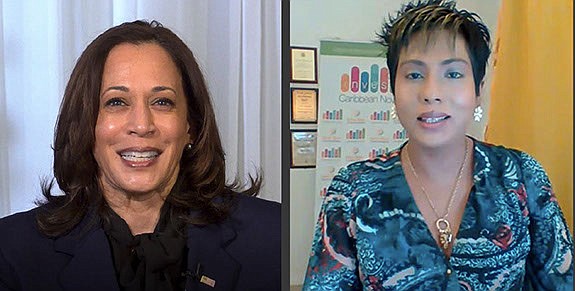 “Thank you for the efforts that so many of you have made throughout the course of the campaign to get us to this moment…You did the work. You helped lay the groundwork for this historic occasion,” VP-elect Harris said. “Now, because of you and so many others, our country is on a path to heal and rebuild.”

She also recognized the contributions of Caribbean Americans to the United States, which she said are woven “throughout the fabric of our country.”

“Those contributions are reflected in the lives of so many Americans with Caribbean roots, from Eric Holder and Colin Powell to Shirley Chisholm,” said the VP-elect, the daughter of Jamaican and Indian immigrants. “And I’m proud to be with you, as a vice-president elect with roots in the Caribbean.”

VP-elect Harris also added, “President-elect Joe Biden and I look forward to working with you every step of the way to usher in a brighter future for Caribbean Americans, and all Americans.”

In opening remarks, Persaud delivered a fiery challenge to the VP-elect and the incoming administration, while like Harris, also recognizing the fact that Caribbean immigrant voters helped deliver the historic win for the Biden-Harris ticket.