The Year in Review in Black Theater, Part 2 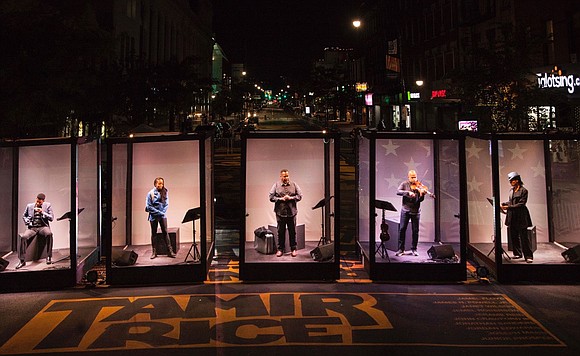 Theatrical performances were suspended on March 12 and it was originally thought that theater would return in September. In July 2020 it was announced by the Broadway League that to ensure the health and safety of theater professionals on Broadway and in all theater community settings, and the health of the public, theater would not return until 2021 and of course this meant all theater in physical buildings. Tony Award winner Norm Lewis remarked, “It’s definitely sad and it’s something that I’m affected by, because it’s such a community, a family…we want to see our colleagues working on and off stage. Being closed is definitely a necessary thing to make sure we’re safe. Hopefully some months from now, we will find a way to work around it, but this is a new normal.”

With artists in great need, grants became available. The New York Foundation for the Arts compiled a list of artists’ relief funds that provided emergency grants in the United States due to the COVID-19 emergency. The list was at www.nyfa.org. Individuals who wanted to donate to the funds could also contact NYFA by going to the website or calling 212-366-6900.

With the pandemic causing productions to close or never get into rehearsals, The Kilroy published its annual list, “The LIST 2020,” which focused this year on playwrights that are women, trans and non-binary writers—playwrights that usually have a difficult time getting their plays produced under normal circumstances. The goal was to spotlight them and their work, so that artistic directors and literary managers from regional theaters across the country would give opportunities to these playwrights when they plan their future theater seasons.

In 2020 the country was very much awakened to the social injustices that face African Americans in this country at the hands of the police. Black Lives Matter and protests were daily fare. Protestors came together in cities around the country to protest the killing of George Floyd, Breonna Taylor and so many others. Theater is a means of reflecting what is going on in our society. It’s a means to spotlight injustice and address it. Members of the Black artistic community did an event on July 29 called “While We Breathe: A Night of Creative Protest,” produced by Broadway producers Brian Moreland and Arvind Ethan David. The event was done to benefit The NAACP Legal Defense and Educational Fund, Inc, The Bail Project, Black Organizing For Leadership And Dignity (BOLD), BYP100 Education Fund, Forced Trajectory Project, The Justice Committee and SONG. It was carried live at www.whilewebreathe.com and on Youtube Live.

In August 2020, the Black theater community came together to lend its support to the Black Lives Matter movement by commemorating the 62nd anniversary of the “A Great Day in Harlem” photo, in which legendary Harlem jazz artists came together to pose for a historical photo demonstrating their support for the Civil Rights Movement in 1958. In 2020 Dr. Indira Etwaroo of the Billie Holiday Theater, wanting to support the Black Lives Matter movement, invited members of the Black theater community to come to the street in front of the Billie Holiday Theatre—the spot where the first Black Lives Matter mural was painted on the street and is protected there—to pose on the mural. The photo event was conceived by Dr. Etwaroo and Marcia Pendelton, marketing executive and founder of Walk Tall Girl Productions. Members of the rheater community—performers, directors, playwrights, designers, arts administrators, general managers, company managers, house management, press agents, marketers, group sales agents and others—were invited to commemorate the original photo and celebrate the legacy of Black activism in the arts. Dr. Etwaroo inspiringly explained, “As over 100 Black artists stood six feet apart on the Black Lives Matter mural with face masks on, we captured this historic moment of converging pandemics that have disproportionately impacted Black communities across the nation: COVID-19 and ongoing racial injustices. More importantly, as we stood in unity, our fists high in the air, this photo embodies the triumph of the human spirit and that we, as a people, are not done fighting for systemic change that has not yet come.”

During this trying year, when the racism that exists in society has been spotlighted, including in the theater realm, and then you have Black Lives Matter, Black theater professionals have come together to stand up for Blacks in the industry. For decades a blind-eye has been turned when Blacks don’t get opportunities and jobs in theater, but Black theater professionals have decided no more status quo. Black Theatre United believes in awareness, accountability, advocacy and action. It was created by actors, directors, musicians, writers, technicians, producers and stage management and includes Lisa Dawn Cave, Darius de Haas, Brandon Victor Dixon, Carin Ford, Capathia Jenkins, LaChanze, Kenny Leon, Norm Lewis, Audra McDonald, Michael McElroy, Brian Stokes Mitchell, Wendell Pierce, Billy Porter, Phylicia Rashad, Anna Deavere Smith, Allyson Tucker, Tamara Tunie, Lillias White, NaTasha Yvette Williams, Schele Williams and Vanessa Willians. The mission statement for this organization: “As members of the Black theater community, we stand together to help protect Black people, Black talent and Black lives of all shapes and orientations in theater and communities across the country. Our voices are united to empower our community through activism in the pursuit of justice and equality for the betterment of all humanity. We will not be silent. We will be seen. We will be heard. We are here. Join us.”

Another organization advocating for Blacks in theater is Black Theatre Coalition, created by T. Oliver Reid, Warren Adams and Reginald Van Lee, along with executive director Afton Battle. This organization addresses the issue of “Illusion of Inclusion” in the American theater, by building a sustainable ethical roadmap that will increase employment opportunities for Black theater professionals. Its vision is to reshape the working ecosystem for those who have been marginalized by systemically racist and biased ideology. BTC has partnerships with non-Blacks in top companies and professionals across every major sector of the Broadway ecosystem including producers, designers, directors, general managers, casting directors, press agents, advertising and marketing executives, booking agents, attorneys and theater companies. “In the midst of the Black Lives Matter Movement, it would be difficult for the theater industry to turn an unaware or blind eye to the goals of the equity for Black professionals,” Reid remarked. “This moment and BTC, along with sister organizations including Broadway Advocacy Coalition, Black Theatre United, Broadway Serves, BFRJ, Black Theatre Girl Magic and more, are all pushing for change…all monitoring the change,” Reid added.

Something very wonderful that happened in 2020 was National Black Theatre receiving its first OBIE Award for sustained excellence in production and continued advocacy on behalf of Black artists. This company, founded by the late Dr. Barbara Ann Teer, located in its own physical complex on 125th Street and Fifth Avenue, has been delivering Black productions for 52 years. The award highlighted the 2019-2020 season that included “125th & FREEdom” and “100 Year/100 Women.” NBT is headed by CEO Sade Lythcott, daughter of the late Dr. Teer and artistic director Jonathan McCrocy.

Making sure as it always does to be at the forefront of reflecting what is happening in society through theatrical offerings, despite the fact that theater can’t happen in a closed-in space, but stories need to be told, especially during this time of Black Lives Matter, the Billie Holiday Theatre came through again. September 2020 saw Dr. Indira Etwaroo present a socially distanced performance on the streets in front of the theater on the Black Lives Matter mural, called “12 Angry Men…and Women: The Weight of the Wait.” The production was performed live on Youtube. The performance was based on real-life stories of people subjected to racial profiling by police. It was based on the 2012 book edited by Gregory S. Parks and Matthew W. Hughey for a play done at the Billie Holiday in 2015 entitled “12 Angry Men: True Stories of Being a Black Man in America Today.” The cast was riveting to watch and included Wendell Pierce, Lisa Arrindell, Marsha Stephanie Blake, Billy Eugene Jones with musical accompaniment by Daniel Bernard Roumain. The production was free on Youtube and remained there for 30 days.

In November the 48th Annual AUDELCO Awards that recognize excellence in Black theater went virtual for the first-time ever and the celebration was done live on Zoom, YouTube and Facebook. The evening which was beautifully hosted by Tony Award winner LaChanze and playwright/actor Roger Guenveur Smith was an evening of Black love, Black pride, Black power and Black passion! If you go to the AUDELCO Award website you can see who won, but also see who was honored, as this year was a stellar group of Black theater greats! The AUDELCO Awards continue to support our people, our stories, our strength!

In December Debra Ann Byrd, founder of Take Wing and Soar Production, now producing artistic director of the Harlem Shakespeare Festival, wrote and performed her one-woman show, “Becoming Othello: A Black Girl’s Journey” and performed it live Monday, Dec. 14. The play was a moving, autobiographical journey that used rhyme, meter, lyrical language and soulful songs to tell her personal story of growing up in Spanish Harlem, in the foster care system, being a teen mom and being a victim of rape. Byrd’s journey was a difficult one, but something that built her into the strong, determined woman that she is today!

At this point, the new year has started and the Broadway (and theater in general) community is in limbo. A timeline of May 2021 has been projected for a theater return, but no one really knows. Theater will definitely be a different experience when it does come back. Until it does, it’s comforting to know that a lot of theatrical groups are turning to virtual performances and are trying to fundraise for theater professionals desperately in need of help. Events like “One Night Only: Best of Broadway” happened live on television to raise money for Broadway CARES/Equity Fights AIDS, and “Ratatouille: The TikTok Musical” recently aired a live, original performance to raise money for the Actors Fund. These organizations are there to assist theater professionals from all lines of work to get food, medications, housing and so much more. The Broadway CARES/Equity Fights AIDS and Actors Fund websites will continue to accept donations. Remember, even before theater is officially back in-person, check the Black theater company websites for virtual productions and events. Look up National Black Theatre, Classical Theatre of Harlem, Black Spectrum Theatre, the Billie Holiday Theatre, New Federal Theatre, New Heritage Theatre and Negro Ensemble Company. We need the fortification and creativity that theater, virtual, live and inspiring, gives to hungry audiences. I pray that 2021 will be the year that theater comes back safely and with a vengeance! I hope to see you at the theater!