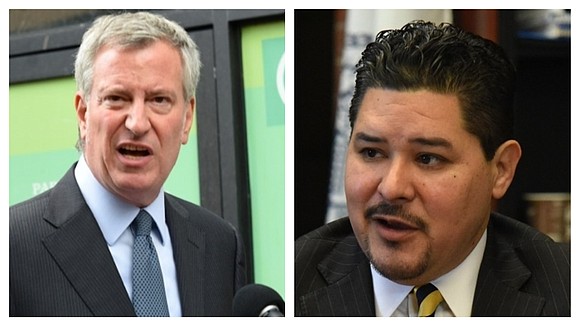 COVID gave them an opening to make changes, and the mayor and schools chancellor are taking advantage.

After multiple requests for comment, the city sent a statement to the AmNews with the mayor and schools chancellor pointing to how virtual learning due to the coronavirus shed a light on school inequality as the main reason for taking this action now.

“The COVID-19 crisis has exposed longstanding inequities in our city’s public schools,” stated Mayor Bill de Blasio. “Now, as we rebuild our city, we are expanding opportunities for all public school students and doubling down on our mission to provide a quality education for all, regardless of a child’s zip code.”

Carranza added, “It is my responsibility to deliver the highest quality education possible to each child, so that they are prepared for a successful, productive life, and empowered with the skills they need to chase their dreams and lead us all forward.”

As part of the plan, the Department of Education will also add and support five districts (9, 13, 16, 28 and 31) to help secure grants to develop community-led plans to diversify its schools. This would make 13 districts total that the city is engaged with. The anti-screening, lottery process has already worked out for one district in Brooklyn.

According to one person in the DOE, post-COVID admissions were discussed for a while “because many traditional metrics were either not available (e.g. test scores, since tests were cancelled) or unreliable (e.g. grades and attendance after school buildings closed in March). Given that the mayor and chancellor have been very vocal in pushing for more equity of access to better schools, the elimination of middle school screens did not come as a surprise to me.”

One parent welcomes the attempt at school equity considering what she went through for one of her children.

“The Middle School process was very grueling for 5th graders,” said Tamika Hall. “There was an essay for some, an interview for others. It seemed fair but there were some schools that had their own process, even outside of the guidelines set by the DOE. Those schools seemed to be a lot less diverse and had a hand in who was selected.”

According to recent analysis from the Citizen’s Community for the Children of New York, using 2018-’19 enrollment data, 41% of the city’s 1,842 public schools didn’t reflect the demographics of the district they reside in. The study also found that, not counting language screening, admissions screening efforts exacerbated misrepresentation in secondary schools.

Latinx, Black and Asians combined make up 62% of the area’s population.

“I see that as patently unfair,” said Banks. “If this is a good school and I live two blocks outside that district I’m being cut off from...it creates a disparate impact. Historically, this has been used to maintain white, middle-class families within the public school system creating enclaves where these students can be among themselves. New York touts itself as progressive, but yet screening has left middle school and high schools set up for a segregated system.”

According to the DOE’s middle school enrollment office, the city will use a computer-generated random number to produce a student’s lottery number. Where the number ends up, along with writing down schools by list of preference, can determine which school the child attends.

This has led to cries of unfairness from parent advocacy groups such as Parent Leaders for Accelerated Curriculum Education in NYC (PLACE NYC) who demand an expansion of gifted and talented programs. According to members of the group, the education gap COVID presented means that students need classrooms targeted to their ability more than ever. They also demand that the DOE’s middle school enrollment process be as transparent as possible.

Maud Maron, PLACE NYC co-founder and vice president and a member of Community Education Council District 2, stated that the DOE rejected its request to share lottery numbers with families due to them being a hexadecimal (string of numbers and letters), which could be difficult for families to understand.

“This is simply an excuse to keep the process opaque,” said Maron. “Instead of the insulting assertion that parents can’t understand simple conversions, the DOE could and should teach 5th graders how to convert their own lottery numbers. Families should be given their lottery number before the middle school application is due. Students with unlucky lottery numbers can research less in-demand schools and not waste their choices on high demand programs. Students with good lottery numbers can limit their research to their top selections.

“It is only fair that families be allowed to adjust their rankings after receiving their lottery number,” said Maron.

The fight against the segregation in the city’s school system isn’t just reserved for adults. Nina Worley of Teens Take Charge (an educational equity advocate group made up of New York City school students), said that if the new process is unfair to some, the old process was unfair to many.

“What is unfair is that in a system that is 65% Black and Latinx, only 10% make up the Specialized High Schools,” said Worley. “It’s unfair that in years past, qualified students were denied entrance to district two schools like Eleanore Roosevelt because they did not live in one of the whitest and wealthiest neighborhoods. It’s unfair that low-income students of color are consistently excluded from the most elite high schools because they don’t have the same resources as affluent middle schools on the Upper East Side.

“Wealthy white families might be getting a taste of ‘unfairness’ for the first time, but students of color have been experiencing it for years,” concluded Worley.

De Blasio has made multiple attempts to change, add to or outright eliminate the Specialized High School Admissions Test (SHSAT).

Several years ago, de Blasio suggested that the top 7% from each public middle school gain automatic admission into schools such as Bronx Science, Stuyvesant and Brooklyn Tech, while students from outside the public school system would be admitted through a lottery. That received pushback from the Asian community on the grounds that they’re being ignored as low-income New Yorkers themselves and see the SHSAT as the only way out for their children.

In 1971 New York State Sen. John Calandra and Assembly Member Burton Hecht introduced the Hecht-Calandra Act that kept the SHSAT as the only manner in which students could gain admission to specialized high schools. With the lack of change to that admissions process Maria Bautista, campaigns director, Alliance for Quality Education, called the mayor’s and chancellor’s attempts at school equity futile.

While AQE didn’t respond to multiple requests for comment, Bautista called out the mayor after he and Carranza announced their plan. Bautista said that it’s a band-aid on a flesh wound.

“Mayor de Blasio’s new admission process falls flat in addressing inequity head on. While eliminating screens for middle schools is a step in the right direction, it is being replaced by a lottery,” said Bautista in a statement. “This requires parents knowing the lottery exists and doesn’t address equity by accounting for students’ needs. In order to truly address decades of inequity, NYC must build in mechanisms to ensure equitable outcomes at all levels.”

New York Post Associate Page Editor, former New York State Assemblymember and Bronx Science Class of ’76 graduate Michael Benjamin said that wealthy parents have found ways to game the system for too long. He spoke of real estate programs that teach parents how to get their children into these schools.

“That was their selling point,” said Benjamin. “Helping you get into schools…and there was nobody Black there but me.” Benjamin also championed the plan due to his rejection of the thought that “gifted” students couldn’t sit in classrooms with “average” students. Putting all students together let educators figure out who could be designated for the gifted and talented classes.

“We used to do that, but tracking became something negative,” said Benjamin.

One track that’s worked negatively is Black and Latinx New Yorkers making up a significant amount of COVID-19 infections, some of which can be attributed to inequities in the healthcare system. Despite knowing this information, a handful of New York City public schools will open to administer the SHSAT this week.

As for de Blasio, he hopes to see his idea come to fruition for the 2021-’22 school year. During an interview on MSNBC this week, the mayor vowed that New York City’s public schools will operate in full capacity when the school year begins in September.

“We’re coming back in September at full strength,” said the mayor. “There’s no doubt in my mind.”

But no matter the results or if school doesn’t come back to full capacity, should the new way of doing things become permanent? Worley said it should but it doesn’t go far enough.

“I think the elimination of middle school and geographic screens should remain; however, we can already expect the same results as years prior,” said Worley. “As long as attendance, grades, and state test scores are considered in high school admissions, white, affluent students will still make up most of the student body in elite schools and low-income students of color [will] continue to be excluded.”