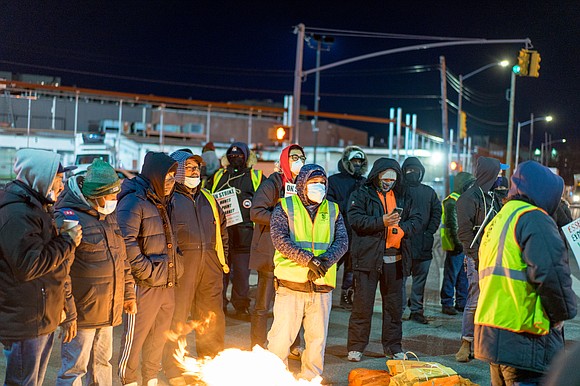 This weekend, Hunts Point workers––who are represented by Teamsters Local 202––reached an agreement on a new three-year contract that covers all 1,400 workers at the produce market.

The new collective bargaining agreement calls for a $1.85 wage increase over the entire contract, which includes 70 cents an hour in the first year. Workers also see an additional 40 cents on top of the wage increase go to the increased health care costs. Workers also successfully obtained increases in management contribution to pensions and adjustments to holiday and flexible working rules.

Teamsters Local 202 President Danny Kane told the members after the contract’s ratification, “You have to work together, fight together, dance together and smile together. It takes courage to put it all on the line and that is what you did. And you fought this battle for working people in this country. It is the largest wage increase we have had in more than 30 years.”

In the beginning, the union asked for an hourly-increase of $1 in the first year and an additional 60 cents an hour for increased health benefits. Management offered 92 cents an hour with the union taking 60 cents out of that increase for health care

As the AmNews reported last week, according to the union, employers at the Hunts Point Produce Market received at least $15 million in Paycheck Protection Program (PPP) loans.

S. Katzman Produce and co-president of the Hunts Point Cooperative Board Stephen Katzman said everyone at the market can get back to the work they’ve been doing for two centuries.

“Our merchants in the Hunts Point Produce Market have been feeding New Yorkers for over 200 years,” stated Katzman “We have kept the city fed throughout the Great Depression, two World Wars, two recessions and now a global pandemic, without ever breaking our crucial role in the food supply chain... New Yorkers can rest assured that they will continue to have access to a consistent supply of fresh fruits and vegetables from the Hunts Point Produce Market.”

News of the agreement made its way to politicians as well. When the AmNews spoke to Bronx Borough President Ruben Diaz Jr., he said “They fed the Bronx in its greatest time of need. I didn’t want all of that good to be tarnished... The market was hit hard, but they showed that men and women needed to be treated with dignity.

Hunts Point workers officially went on strike on Jan.17. The following day, Martin Luther King Jr. Day, six picketers were arrested protesting for being “unlawfully in the roadway and…obstructing vehicular traffic” according to the New York Police Department. The incident was captured on video. Management brought in temporary employees and used private security to protect trucks shipping products from the market during the week-long work stoppage.

It was the first time market workers went on strike in 35 years.

Six workers at the market have died from COVID-19.

“Our food produce workers wanted a $1 raise after risking their lives in COVID. They were denied, asked to pay more for healthcare, & told ‘you’re lucky to even have a job,’” wrote Ocasio-Cortez. “So they went on strike. Community supported them. Now they’re getting a $1.85 raise and $0 out of pocket.”