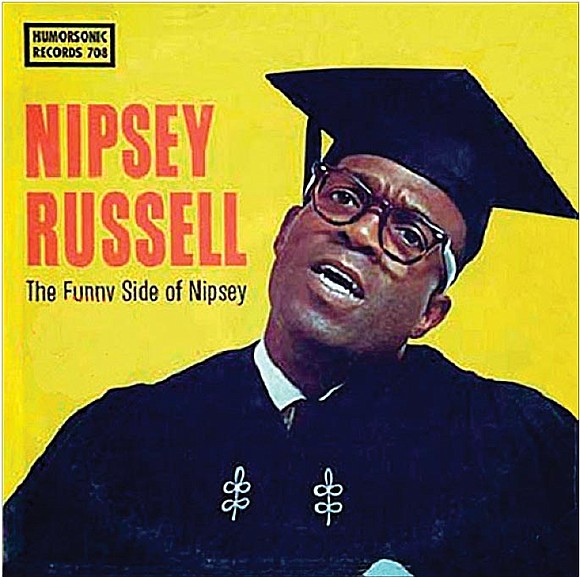 Unlike Redd Foxx, Slappy White, Dick Gregory and Moms Mabley, Nipsey Russell had an easier and safer welcome to the living rooms of America. His comedy routine relied mostly on his gift of gab and poetic rhymes to amuse, making common events laughable and toning down the racial discord and sexual innuendos.

Born Julius Russell on Sept. 15, 1918 in Atlanta, Georgia, the comedian’s birthdate was contested territory with differing accounts of when he was born, though the Census data show a Julius Russell at the age of a year to four months in 1920, and that would be consistent with information that he was born in 1918. What we know for sure is that he attended Booker T. Washington High School in Atlanta and later matriculated at the University of Cincinnati in 1936 for one semester.

During World War II, he served as a medic in the U.S. Army. He enlisted as a private in 1941 and, after a tour in Europe, mustered out in 1945 as a second lieutenant. Shortly after leaving the military, he embarked on a career as a comedian working as a carhop at The Varsity, a drive-in where he began to develop his comedic routine that earned him sizable tips—and laughs.

These moments at The Varsity were the rehearsals, so to speak, that he began to perfect on nightclub stages in the 1950s. Some of these routines were recorded and the compilations were included on several albums. His real breakthrough occurred in 1952 when he joined noted entertainer and popular movie star Mantan Moreland, where he replaced Ben Carter as Moreland’s straight man. One of their favorite routines was one that had long existed in vaudeville and was defined as the “interruption routine,” where one partner would start a conversation and have it interrupted by the other. Then the incomplete sentences between them would flow into a mishmash of puzzlement. One example evolved like this:

Tim Moore who was the Kingfish on the “Amos ‘N Andy” television show, often performed this routine as well with Dusty Fletcher and Stepin Fetchit. A variation of the routine was used by Spike Lee in his film “Bamboozled” where comedian Tommy Davidson and dancer Savion Glover were the two delivering the incomplete sentences. Russell’s career was dramatically increased after his appearance on the “Ed Sullivan Show” in 1957, which led to guest spots with Jack Paar and film cameos in “Car 54, Where Are You?”

In 1965, his career got another bump when he became the co-host of ABC’s “Les Crane Show.” Five years later he was the co-star of “Barefoot in the Park,” an ABC sitcom. He was a regular on two Dean Martin shows from 1973 to 1976. This increased visibility and his easy comedic manner made him popular in Las Vegas and led to frequent appearances at the renowned hotels there, including the Sands and the Frontier. There were also performances at an assortment of country clubs and special events across the country.

But he zoomed permanently into the American popular culture with his television appearances, none more impactful than shows such as “Match Game,” “Password,” “Hollywood Squares,” “Pyramid,” and “To Tell the Truth.” His appearances always brought moments of laughter and comedic insight, to say nothing of his quickly improvised poetry. These hilarious bits earned him the title as the “poet laureate of television.” Later, his rhyming skills were put to humorous use on ABC’s “Rhyme and Reason.” A sample of the exchanges with other guests and the host included—

“Host: Jack said to Jill when they came down the hill... Russell: We didn’t go there for water—I hope you take the pill!

Host: Will sex still be great when I’m 98... Russell: It might be, but I won’t participate!”

Whether on stage, television or in films, Russell had a magnetic attraction which was showcased in “The Wiz” with his performance as the Tin Man. On this occasion he had an opportunity to reprise his dancing that was once part of his act.

All of this adept comedic timing was exemplary on game shows, particularly “Hollywood Squares” and other shows where the host provided him a unique platform for him to deliver his funny verses. And these verses were even more poignant when interwoven with political images. Check these stanzas:

“George Washington threw a silver dollar Across the Potomac one day, And ever since then, politicians in Washington Have been throwing our money away!

The opposite of pro is con. That fact is clearly seen. If progress means moving forward, Then what does Congress mean?”

Much of Russell’s genius occurred long before the current generation could experience these impromptu moments, but they got a taste of it in the 1990s with his chatter with Conan O’Brien on his late night show. When “Hollywood Squares” was temporarily revived, Russell was summoned to renew his famous quips.

Russell was 87 when he died in 2005 in New York City. He had suffered from cancer for several years. His ashes were scattered in the Atlantic Ocean.