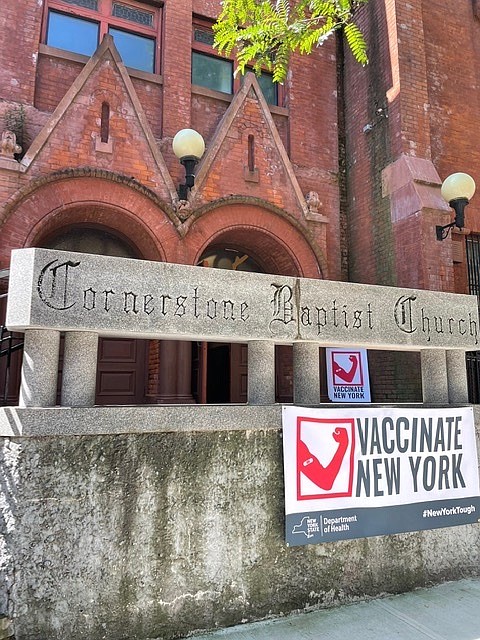 A church in Brooklyn isn’t only turning to Jesus to save its congregation. It’s using Pfizer, Moderna and Johnson & Johnson as well.

Last week, VIP StarNetwork, in conjunction with the Cornerstone Baptist Church, opened a permanent vaccination site in the church. Cornerstone, based in Crown Heights, wants to be a beacon for the community.

Johonniuss Chemweno, CEO of VIP StarNetwork and founding CEO of Inverse Medical, said that the company picked the right area to use as a vaccination site.

“Cornerstone Baptist Church is a landmark site for the community there,” said Chemweno to the AmNews. “It’s a very large church and has a great following, and we are trying to create more energy around something of permanent size. It's an important beacon for the community for other types of healthcare services outside of vaccinations.”

VIP StarNetwork provides COVID health services for film studios like Netflix and Amazon. They also provide COVID health services for sporting events and were recently approved as a Mass Vaccination Provider by the Centers for Medicare and Medicaid Services (CMS). Chemweno told the AmNews that there was an opening to be a provider due to the lack of vaccinations in the Black and Brown communities.

“We saw that the priority level during the roll out from the federal government and state government. We saw who priority No. 1 was,” stated Chemweno. “That priority was not the Black community.”

A report from the New York University’s Grossman School of Medicne, published in JAMA Network Open, found that the beginning of the vaccine rollout focused mainly on middle-to-upper class white districts. These areas also had 50% more vaccination sites than ones in Black and Brown Brooklyn districts. This created the equivalent of a food desert where some districts, like District 16, didn’t have any vaccination sites at all.

The most vaccination sites in Brooklyn belong to District 18, which has 10. The District is almost 62 percent white.

“What can we do in terms of trust across the Black and Brown community and find a site that’s based on faith, beliefs and core values that community members trust?” That came in the form of Senior Pastor Rev. Lawrence Aker, III. While he wasn’t available for comment, he played a significant role in bringing this to fruition.

“The findings of this study suggest that there are substantial vaccination access deserts (areas without ample vaccination resources relative to surrounding areas),” read the report. “With many preliminary barriers to vaccination uptake, including supply issues, scheduling multiple doses, and a delay for scheduling appointments, vaccine rollout has been slow. Furthermore, early COVID-19 vaccination efforts in NYC have been focused primarily in white, middle-to-upper class neighborhoods, with the greatest access occurring in these areas.”

This, explained Chemweno, is the whole point of his mission.

“We’re looking week-by-week at our vaccination rates in terms of how many people were able to kind of bring into the fray and bring it to the site to receive the vaccine,” Chemweno said. “So whether that’s Johnson and Johnson, whether it’s Pfizer, people should be able to take what’s in front of them versus trying one vaccine over the other. You look at other countries right now, developing nations, that don’t have the vaccine, they’re trying to get access to that.”

“This is the job that we have to take…to try to educate more patients.”