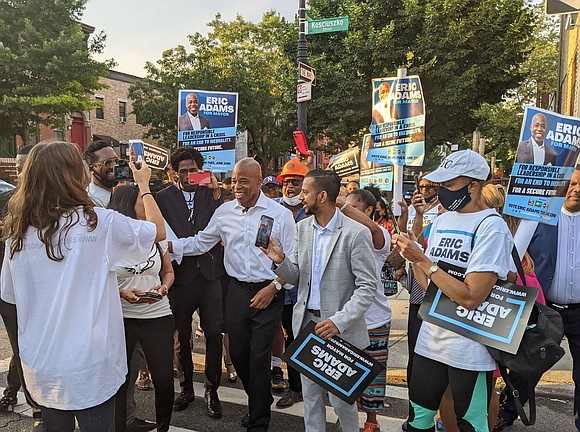 Adams would be the city’s second Black mayor after former Mayor David Norman Dinkins, who was in office 28 years ago and recently passed in 2020.

“I was so fortunate to have [Mayor] David Dinkins as a friend and mentor—and it would be my great honor to continue the path forward that he started as mayor," Adams said in a statement. "I am so proud of the coalition we put together of Black, Latino, immigrant and all working class communities—and I think Mayor Dinkins would be as well. As mayor, I will make sure this is a city that works for all, and not just some.”

The somewhat convoluted RCV rounds showed that civil rights activist Maya Wiley ended up eliminated after the seventh round.

Other candidates were eliminated in previous rounds in groups through a standard practice called “batch elimination,” said FairVote Communications Director Ashley Houghton. Batch elimination is meant to simplify the process when it’s known more than one candidate mathematically won’t impact the final results. “It’s only if there’s really very little difference between the rounds,” said Houghton.

“There are some who argue that ranked choice voting improves turnout because it makes voters more likely to feel engaged,” said Houghton. “And I think we saw more people across all five boroughs. This was one of the highest turnout New York elections for mayor since Ed Koch won in 1989. Some people are saying ranked choice is a part of that. Some argue ranked choice hurts turnout but we haven’t actually seen that in the numbers. I think ranked choice voting is one element of a number of variables that impact turnout.”

There were 3,376,341 active voters enrolled as Democrats back in February and 937,699 unofficial ballots cast, said BOE Communications Director Valerie Vazquez, but because the results are not yet certified there’s not an official number for how many people actually voted in the primaries.

At present the results include early voting, in-person Election Day votes, and nearly all the absentee ballots, said BOE commissioners in Tuesday’s meeting.

The BOE said that staff have been working around the clock to ensure the validity of the results this time.

There are still 3,699 outstanding absentee ballots that qualify to be fixed or “cured” by July 14, which is when the BOE will hopefully certify the results and officially declare a winner.

The Associated Press, Politico and CNN have already called the race for Adams, and as of Wednesday, Garcia conceded defeat. She said in a press conference that her campaign “cracked the hell out of the glass ceiling.”

“We congratulate Eric Adams on a well-deserved victory, and on becoming only the second Black mayor in New York City history. He rose from humble beginnings by dedicating his life to uplifting all New Yorkers,” said Hermelyn.

“Adams’ victory today is a significant win for Brooklyn, New York City, and the State. Eric has the judgment and experience to help restore the city’s economy and make our streets safe again. This is a major step forward. As our 110th mayor, Eric will usher in a new era of recovery by delivering justice, safety, and equity to the people.”

Adams is poised to square off against Republican nominee Curtis Sliwa in the November general election.