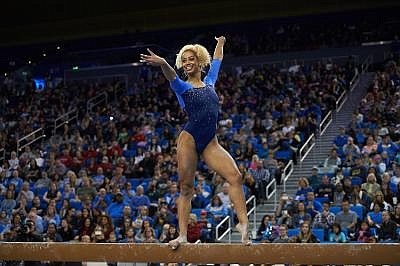 Nine years ago, Danusia Francis thought her days in competitive gymnastics were over when she was named an alternate to the British Olympic team, so close yet so far from her goal. As it turns out, her competitive days were just beginning. Encouraged to explore U.S. collegiate gymnastics, Francis became a member of the UCLA Bruins and became an NCAA Champion.

When the Olympic Games open tomorrow in Tokyo, Francis, 27, will be there as a member of the Jamaican Olympic team. Several years ago, she opted to represent her father’s home country and has built a series of successes since then, including qualifying for these Olympics based on her placement at the 2019 World Championships.

Francis was a bit anxious before traveling to Tokyo, but said she would relax as soon as she arrives in the Olympic village. “I’m excited,” she said. “My goal has always been to participate. 2019 was me achieving the hard part and now I get to celebrate.”

The Olympic events will take place without spectators. “I’m grateful it’s going ahead,” said Francis, who postponed her wedding, originally scheduled for spring 2021, to concentrate on training.

After living in isolation for more than a year, Francis is looking forward to seeing her Jamaican teammates. While she is the lone gymnast, she has forged bonds with athletes from other sports. “There will be this collective feeling of gratefulness, she said. “There will be even more camaraderie because of what we’ve all been through.”

The first day of competition for women’s artistic gymnastics is July 25. The top 24 finishers get a place in the all-around, but each country can only have two gymnasts, so Francis has a good chance of earning a spot. In 2019, she made history at the Pan Am Games, becoming the first Jamaican gymnast to earn a spot in an apparatus final, the balance beam, but said that likely won’t happen in Tokyo.

Francis provided some insight into what we may see in gymnastics. U.S. gymnast Simone Biles has dominated the sport for several years and will likely do so again in Tokyo. “People, including myself, want to see her create history because…she is just phenomenal,” said Francis, who will join Biles in the Gold Over America Tour this fall. “I think the all-around, the vault and the floor are hers for the taking.

“She’s definitely up there on beam, but the Chinese have been incredible on beam,” she added. “The bars is her weaker event, but she’ll make the finals. The Russians, the Chinese and Sunisa Lee from the USA are there. [Simone] may not medal, but it would be great if she did to have a full set of medals.”