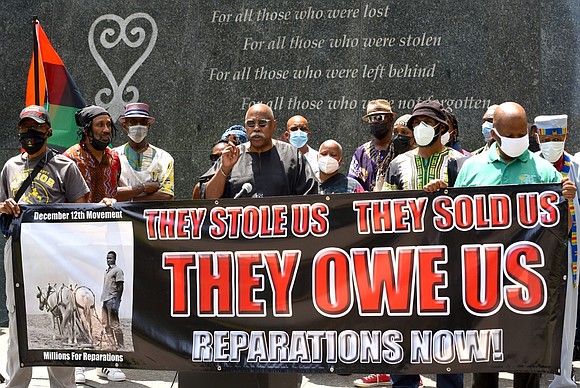 The excitement in Assemblyman Charles Barron’s voice was palpable and evidence of a revelation as he announced that the New York State Assembly had voted to pass a slavery reparation bill. “On a vote of 107 to 43, the State Assembly voted to establish the ‘New York State Community Commission on Reparations Remedies,” he said over the phone. “This is a great victory and we are on our way to the African Burial Ground to celebrate this moment.”

As promised, by noon on June 10, a crowd gathered at the memorial site with a contingent of the December 12th Movement at the center. Barron, who was joined at the event by his wife, Councilmember Inez Barron, said, “The bill sets up a commission that will include among elected officials two representatives from three local Black community groups, including the National Coalition of Blacks for Reparations in America (N’COBRA), the Institute of the Black World 21st Century, and the December 12th Movement.”

Members of the December 12th Movement applauded the State Assembly for passing the bill, authored by Barron, and insisted that the State Senate “act today to complete that stage of the campaign. Any further delay is inexcusable.

“We, the December 12th Movement, who for over 30 years have been waging the fight for reparations, locally, nationally and internationally, in the streets, in the classrooms and in the courts, are honored to be one of the three community representative organizations…designated to the Commission.” (See the Classroom article on the Rev. Isaiah Dickerson for historical context on reparations.)

Omowale Clay said that the December 12th Movement will be holding a Juneteenth Commemoration at Frederick Douglass Square (formerly Nostrand and Jefferson avenues) in Brooklyn to begin at noon on Saturday, June 19.

“The reparations bill complements our campaign to demand an Executive Order from President Biden providing for a $50 billion down payment on reparations to be directed to the reform of healthcare delivery systems in Black communities,” the organization stated. Among the attendees was Larry Hamm of POP (People’s Organization for Progress) from New Jersey and the esteemed minister the Rev. Herbert Daughtry.

A banner unfurled at the African Burial Ground was emblazoned with the watchwords of the D12 Movement—“They Stole Us! They Sold Us! They Owe Us! Reparations Now!”