Cool off with some wonderful waterfall destinations 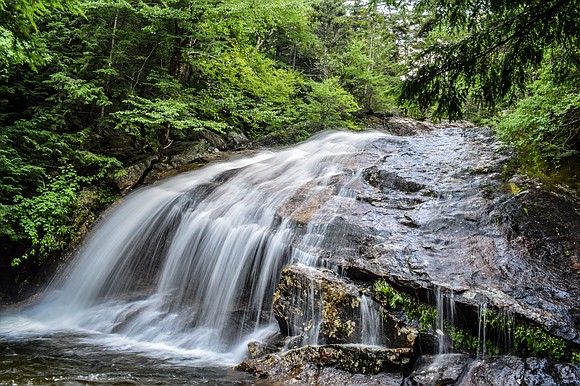 Waterfalls never disappoint. Their beauty awes. If you had to hike to get to it, the victory of the climb and the site you behold makes the reward sweeter still. To look at a waterfall is one thing, to be able to jump in the invigorating waters can be a chilling thrill unlike anything else, refreshing to body and soul.

When summer’s heat calls for a special place to cool off, consider one of these waterfalls.

Thompson Falls is located in Pinkham’s Grant, near Gorham and Jackson, on Route 16 in the White Mountains of New Hampshire. Trailhead parking for the Way of the Wildcat Natural Trail (which leads to Thompson Falls), can be found at the Wildcat Mountain Ski Area. Enjoy a 0.7-mile nature walk to beautiful Thompson Falls, which is a 150-foot series of cascades that flows from Wildcat Mountain. This beautiful and peaceful waterfall is a bit under the radar compared to others in the area, so you won’t have to worry about crowds. Do pack a lunch. If you’re spending the day in Pinkham Notch, consider taking a chair lift ride at Wildcat Mountain for summit views of nearby Mount Washington.

There are more than 50 waterfalls within the Blue Ridge Escarpment (where the Blue Ridge Mountains drop abruptly 2,000 ft to the Piedmont below), making it the heaviest concentration of waterfalls within the Eastern United States. What folks rave about are the Reedy River waterfalls in the center of Main Street, running right through downtown Greenville. They remained hidden under a highway/overpass until recent revitalization efforts in the early ’90s. Now, Falls Park on the Reedy River and the 355-foot suspension pedestrian bridge that wraps over the falls is the leading tourist (and local) attraction in Greenville. Less than an hour from downtown there are five state parks with falls. The 30-foot Wildcat Wayside falls on Scenic Highway 11 is another favored spot for chilling.

Travel and hiking expert, Kristen of ReadyGoHike.com says one of the best waterfalls in the U.S. for swimming is a hidden gem located in Swallow Falls State Park in Western Maryland. Most people visit the park to see the dramatic Muddy Creek Falls crashing over its cliff. This spectacular 53-foot waterfall is the highest free-falling waterfall in the state. “While you certainly can’t do any swimming at this breathtaking waterfall, if you continue down the mile-long hiking trail that passes through a stand of ancient hemlock trees that’s more than 300 years old, you’ll come across the namesake for the park: Lower Swallow Falls and Upper Swallow Falls,” she says. Of the two waterfalls, Upper Swallow Falls is a popular spot to take a dip because the waterfall fans out into a spill that creates a natural water slide with a swimming hole below.

Helton Creek Falls in Vogel State Park is home to many falls. The Helton Creek Falls Trail is a relatively short (.3 mile) hike that follows Helton Creek to two waterfalls. The trail accesses the lower falls at both the bottom and top of the falls and ends at the bottom of the upper falls. The total vertical drop is more than 100 feet. Splash around in the pool at the bottom of the falls. Vogel State Park is one of Georgia’s oldest state parks and the drive there passes through Neel Gap, a mountain pass near Brasstown Bald, the highest point in Georgia. Take your pick of trails, like the 4-mile Bear Hair Gap loop, an easy lake loop that leads to Trahlyta Falls, and the challenging 13-mile Coosa Backcountry Trail. The park’s 22-acre lake is open to non-motorized boats, and there’s also the mountain-view beach.

Rocky Brook Falls is the only waterfall in the Olympic Peninsula with a pool at the bottom of the scenic waterfall that is perfect for swimming. To get here is not a true hike but a walk of about 200 yards and family friendly. Rocky Brook Falls is located on the outskirts of the Olympic National. Although you can’t swim at these next falls, while you’re in the area do check out Marymere Falls. The waterfall cascades down 90 feet and is one of the more popular attractions in the Olympic Peninsula, which is nicknamed the valley of 1,000 waterfalls. Then there’s Sol Duc Falls. They plunge into a narrow, rocky canyon and split into as many as four channels as water cascades down 48 feet. They are easily accessed from the hot springs on the Sol Duc Falls trails, an easy, level groomed trail that winds through the forest along a creek.

Home to 77 waterfalls, Marquette, Michigan is where you’ll find Dead River Falls. The Dead River snakes through Marquette County, however, the portion just west of the city of Marquette drops 90 feet in about a half-mile. Uninhibited by any dams or diversions, this portion of the river is home to a sprawling series of waterfalls. To get here, park your car at the end of Forestville Road just off of Wright Street in Marquette and follow the signs. The hike crosses sections of unmaintained trail and can be slightly challenging at times. Once you’ve made it past the cedars, reward yourself with a dip in one of many swimming holes.