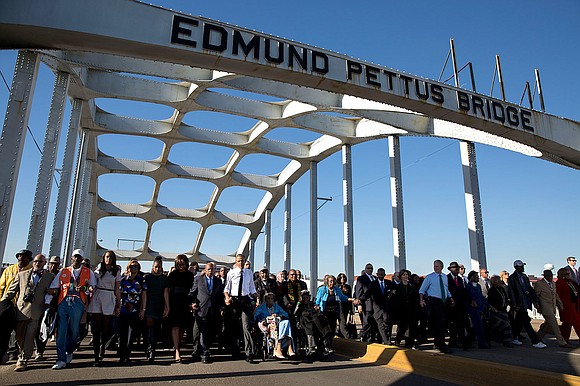 Of the terrible reminders of the struggle for civil rights in the nation, “Bloody Sunday,” is among the most unforgettable. The world watched as Alabama state troopers swarmed into a march of protesters with brutal abandonment, clubbing harmless and unarmed people unmercifully.  Viola Liuzzo, a white woman in Michigan was so upset by the incident that she drove all the way to Selma to help those freedom fighters, participating in a number of capacities.

We hope that her courageous commitment was not forgotten during the commemorations of that event last Sunday. She was a remarkable woman, wife, and mother who gave that proverbial last ounce of devotion as a martyr––her death helped certify the Voting Rights Act of 1965.

As we remember her, we are reminded of the countless others who paid the ultimate sacrifice, and now those cherished victories, so often pyrrhic, are battles that we must fight against as the Republican Party retrenchment is on the march once more.

Across the nation state legislatures are mounting campaigns to make it more difficult for people to exercise their franchise, particularly as the midterm election looms on the horizon. Vestiges of states’ rights are being invoked and restrictions are proposed to ensure a reversal of the Democratic vote that ushered President Biden and Vice President Harris into office.

No-excuse absentee voting, exclusion of the formerly incarcerated, no early registration, and ending “Souls to the Polls,” are among the measures that passed and will have a devastating impact on Democratic Party voters since most of the states voting on these proposals are controlled by Republican legislatures.

Many of these restrictions are residue of the previous Trump administration, and while he may no longer be in the White House he is the white louse who sucked the political blood out of the democratic process.

Given this renewed menace, our resolve must be ever vigilant, even more ready to secure those rights we thought we had won more than a generation ago. To be sure, democracy is a process in progress, and that progression has to be protected if we are to reach that pinnacle of its total impact on our lives.