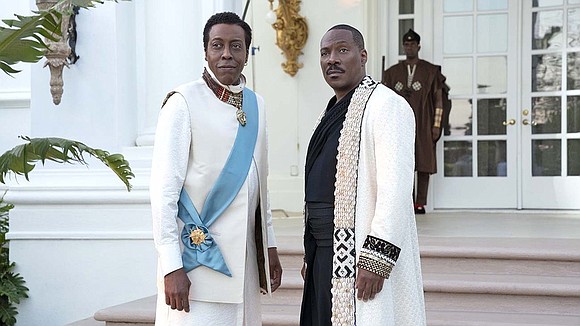 “Coming 2 America” re-teams Eddie Murphy and Arsenio Hall in their original roles. They are joined by KiKi Layne, Leslie Jones, Tracy Morgan and Wesley Snipes. The original comedy debuted in 1988 and it was a massive hit.

Amazon Prime Video the streaming service canceled a planned theatrical run due to the pandemic—a smart move. Naturally, there’s a nostalgic glow around Murphy, who already had a string of comedic revisits such as “Beverly Hills Cop II” and “Beverly Hills Cop III,” “Dr. Dolittle 2” and ”Nutty Professor II: The Klumps.”

I don’t think “Coming 2 America” is really a sequel, perhaps because of the long period between the films—1988 and 2021, that’s 33 years. This film is more like a remake that features a young actor living through a lot of the very same challenges Murphy’s character lived through as well. Naturally, there are many Easter eggs scattered throughout the film, always fun especially since the Murphy-Hall comedic chemistry is alive and very well.

Murphy is back in his royal slippers as Prince Akeem of Zamunda. Hall is back as his trusted associate Semmi. And what do they need to do, again? Well, go back to America and back to—you guessed it—Queens, New York. This time they are searching for Akeem’s unknown son, Lavelle (Jermaine Fowler). Letting the proverbial cat out of the bag, so to speak, is an ailing King Joffer (James Earl Jones).

Akeem, who will shortly take the throne, needs a male heir in deference to royal tradition, which does not sit well with his wife, Lisa (Shari Headley), and their eldest daughter, Meeka (KiKi Layne). Life is never dull in the kingdom with Akeem’s long-standing rival, General Izzi (Wesley Snipes) plotting to marry off his son, Idi (Rotimi), to Meeka as a pure power move.

Traveling to Zamunda as its future heir, Lavelle brings along his calculating mother (Leslie Jones) and uncle (Tracy Morgan), who love the trappings and the luxuries of royal life. But Lavelle doesn’t fall for the seduction of General Izzi's daughter, Bopoto (Teyana Taylor). Following his heart, much like his father did years ago, he falls in love with his hairstylist, Mirembe (Nomzamo Mbatha).

Of course, true love triumphs over royal obligations. It’s not a spoiler alert, it’s understood that in films like this there is always a happy ending.

“Coming 2 America” directed by Craig Brewer, who previously worked with Murphy on “Dolemite Is My Name,” has fun, I think, with a screenplay by Kenya Barris, Barry W. Blaustein and David Sheffield. Sure it’s by-the-numbers but those “numbers” add up to big money and that fact makes Hollywood very, very happy.

Murphy has not lost his powerful charm. And young Fowler does a good job: sturdy and interesting and possessing the type of vibrancy that introduces an exciting new star.

The film is fun and so much of that is the celebrity cameos, including the great Morgan Freeman using his powerful, god-like voice and overall presence, and South African Trevor Noah as a “ZNN” anchor. Musically there are some gem performances by Salt-N-Pepa, En Vogue, and a hilarious riffing on one of her biggest hits with a rendition of “Midnight Train From Zamunda” by the great Gladys Knight.

“Coming 2 America” is a perfect film for Amazon Prime Video. Binge away. You won’t be disappointed.