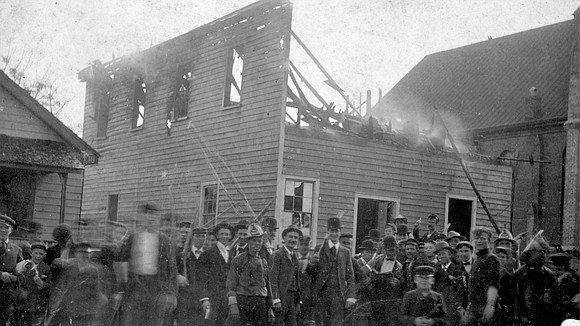 It’s often said that history is written by the victors, and in the case of Wilmington North Carolina it’s very true—or rather, it’s as if history wasn’t written at all for many years. Though the brutal massacres occurring around so-called Black Wall Street in Tulsa, Oklahoma and in Rosewood, Florida are widely known, the one that took place in Wilmington, North Carolina has hardly ever been written, or talked about. North Carolina native and filmmaker Christopher Everett is changing that with a pair of documentaries, “Wilmington on Fire,” and its sequel “Wilmington on Fire II.”

In an effort to roll back progress Blacks had made since the Civil War and seize power, on Nov. 10, 1898, white supremacists, many of them disgruntled Confederacy loyalists, burned Black businesses, most notably the Black-owned newspaper The Daily Record in Wilmington North Carolina. They also killed approximately 60 people.

Everett, who has the site BLKDocs.com, a community of Black documentarians partnered with Maysles Center here in Harlem, is also working on the documentary “Grandmaster” about another Wilmington figure, Vic Moore. “It’s an untold part of Black history. He was one of the first Black Grand National Champions in the United States. He’s an excellent master teacher, and was one of the pioneers of the sport of karate.”

There’s one thing that distinguishes the Wilmington Massacre from the others in Everett’s mind.

“They actually overthrew the government. It was a successful coup d’etat. They got Black elected officials out of office and replaced them with whites. That’s the key component.”

The events were the catalyst for implementation of Jim Crow in a city that had bustled with Black businesses, where segregation was a foreign idea, and one with a Republican Party strengthened by strong coalitions across racial lines. Of course, the constituencies of the Republican and Democratic parties changed in the later 20th century when some Democrats broke away from total disenfranchisement of Blacks. The texture and tenor of the parties continued to evolve as Democrats pushed through a number of Civil Rights laws.

Likely because the insurrectionists seized power and controlled media and education, for the century after the massacre, there was silence about the event. There was silence about the loss of untold amounts of money and other assets, and the subsequent migration of many of Wilmington’s citizens to escape the environment of terror. Wilmington’s Black community in the 20th century struggled, while the wealth and power seized over a century before by whites seemed only to have compounded.

“People had heard things over the years,” explains Everett, “so in 1999 the state of North Carolina decided to create a commission to study it and get the history out.” This culminated with the Wilmington Race Riot Report, issued in 2006. Larae Umfleet, a white researcher who helped compile the report, appears in Everett’s documentary.

For Everett, the massacre was avoidable. “The whole 1898 massacre stems from the Civil War because the folks who committed the massacre should not have been able to participate in government in any way whatsoever. If they were dealt with the way people who commit treason are dealt with, this wouldn’t have happened.” Fearful of inciting another Civil War, then-President McKinley, did nothing to make anyone accountable for the lives and property loss. Says Everett, “It made other places aware that they could do the same thing and get away with it, which is what happened throughout the south.” Intense propaganda campaigns combined with intimidation dissipated the coalitions between whites and Blacks. “The Republicans after that turned their backs on African Americans,” states Everett.

He admits that recent events remind him of Wilmington. “In November [of 2020], I thought to myself yeah, this could happen again because this thing getting boiled up is very similar to what happened in 1898 with all the hate speech, and the government isn’t holding anyone accountable.”

Everett is currently working on completing the sequel to “Wilmington on Fire,” which he says will be ready for screening sometime this year. He explains that it will focus on a different aspect of the massacre.

Featuring economist Julianne Malveaux as one of the commentators (and partly exec-produced by Hilarie Burton), “Wilmington On Fire II” will delve more deeply into the value of the property lost during the 1898 massacre and the topic of reparations. “I wanted to do something different as an artist. This one will be more verité style and really make the focus solely on Wilmington today and their coming together.” Everett says he wants to put the focus on those trying to revitalize Wilmington’s Black business class and those pushing for reparations.

The sequel will illustrate that though there are problems, many in Wilmington are doing what they need to do to bring the city forward. “I really wanted to show that we are doing some great things, but people usually don’t talk about it and they make it seem like Black people are sitting back and waiting. I wanted to show that Wilmington can once again be as great as it was in 1898.”