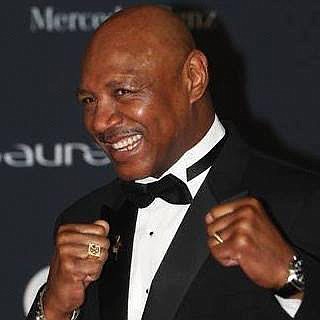 “I am sorry to make a very sad announcement,” she wrote. “Today unfortunately my beloved husband Marvelous Marvin passed away unexpectedly at his home here in New Hampshire. Our family requests that you respect our privacy during this difficult time.”

Born May 3, 1954, in Newark, New Jersey, he moved to Brockton, Massachusetts in the late 1960s. Managed and trained by Goody & Pat Petronelli, he compiled an amateur record of 52-2 (43 KOs), winning the 1973 National AAU Middleweight Championship and being named the tournament’s Most Outstanding Fighter.

He turned pro in 1973 and faced that era’s top boxers, often on the road, such as 1972 Olympic Gold Medalist Sugar Ray Seales, Bobby “Boogaloo” Watts [disputed majority decision loss Jan. 13, 1976], Willie “The Worm” Monroe [decision loss March 9, 1976], Eugene “Cyclone” Hart and Bennie Briscoe. Hagler avenged the Watts loss, and the one to Monroe, twice. His talent-level made other fighters avoid him. He was 46-2-1 when he finally secured a title shot Nov. 30, 1979 against undisputed 160-pound champion Vito Antuofermo, which resulted in a disputed draw.

Haggler stopped Alan Minter in the 3rd round on Sept. 27, 1980, in the U.K., becoming undisputed World Middleweight Champion. For the next seven years he imposed one of the most dominant reigns in boxing history which included 12 successful title defenses, 11 by knockout, as well as 1983 and 1985 Fighter of the Year awards. On April 2, 1982, he legally changed his name to Marvelous Marvin Hagler.

On April 15, 1985, Hagler knocked out fellow legend Thomas “Hitman” Hearns in the third round of their epic slugfest many experts consider to be one of the greatest fights in boxing history.

Another super-fight occurred on April 6, 1987 when Hagler faced 1976 Olympic Gold Medalist Sugar Ray Leonard in one of the biggest sporting events until then, and one of most controversial decisions in boxing history, when he was declared loser by split decision. He retired soon thereafter, moved to Italy and starred in several movies.

Hagler was inducted into the International Boxing Hall of Fame 1993 with a 62-3-2 (52 KOs) record. During his prime, the 5’ 10” muscular southpaw with a shaven scalp was an imposing figure who possessed the skills to pay the bills. Along with Hearns, Leonard and Roberto Duran; they comprised “The Four Kings of the Ring.” From 1980 to 1987, he was the undisputed world middleweight champion.

“He’s in ICU fighting the after effects of the vaccine!” Hearns claimed in his social media post Saturday.

Despite Hearns’ claim that Hagler died due to adverse reactions to “the vaccine,” Mrs. Hagler disputes this.

“For sure wasn’t the vaccine that caused his death,” Mrs. Hagler wrote Monday, March 15 on Facebook. “My baby left in peace with his [usual] smile and now is not the time to talk nonsense.”

TMZ reported that one of Hagler’s sons said his father was hospitalized Saturday “after experiencing trouble breathing and chest pains at home.”

It was unclear if Hagler was vaccinated against COVID-19.