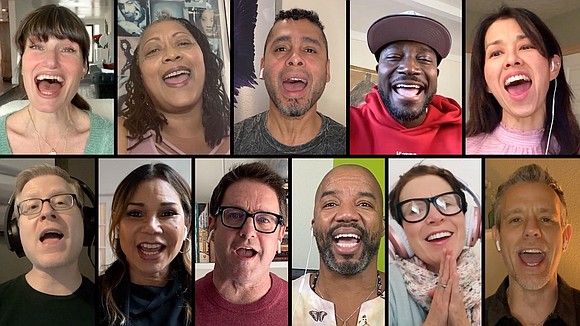 New York Theatre Workshop held an absolutely magnificent virtual fundraising event earlier this month honoring “Rent,” which got its start at NYTW 25 years ago. The evening called “25 Years of Rent: Measured in Love” was one of the those rare, unforgettable times when we were able to look into the making of this extremely relevant and very poignant musical, which brought attention to the lives of people living in the East Village, part of the arts community, who were also infected with HIV/AIDS in the 1990s when people didn’t want to talk about it or deal with this catastrophic illness that was claiming the lives of so many people. “Rent,” the baby of Jonathan Larson, looked very intimately at the tragedy that was befalling this community of gays, lesbian, drag queens and the feeling of community that existed between these artists. Larson made this illness something very real; he did this musical with such a clearly tender hand and in remembrance of his friends that were passing away. It was a musical that spoke to the human condition to be afraid of this illness, but also to be afraid of what having the disease would mean to one’s life, especially near the end when the disease had taken its course. Larson’s brilliance, compassion and heart were put before viewers as videos were shown of him working in a diner that he used to be employed in while he was creating “Rent.”

The mission of NYTW is to create and develop new work, and they struck absolute gold with Larson and “Rent.” The evening, hosted by Olivia Lux of RuPaul’s “Drag Race,” was packed with interviews with “Rent” director Michael Greif, as he sat in the theater recalling what it was like working on “Rent” and working closely with Larson. At times you could see he was getting emotional as he spoke of how Larson knew what “Rent” could do. “It’s unbelievably heartbreaking that he’s not around to see what happened to his scrappy musical. We were making it for a community close to the community it was about,” Greif stated.

James Nicola, NYTW artistic director, immediately realized the attraction of doing a piece of theater about the neighborhood in which NYTW was located, 79 E. 4th Street in the East Village. Greif and Nicola and Tim Weil, musical director for “Rent,” shared many remembrances of Larson’s dedication to the work and his excitement every time he wrote a song and would rush in to share it. It was shared that Larson got to know the actors in the cast and wrote songs to fit the actor’s personalities.

Julie Larson, Jonathan’s sister, was an integral part of the evening as she talked about what being a part of NYTW meant to her brother. “He felt he found some place to do his work and be encouraged,” Larson shared.

African American playwright Dael Orlandersmith, speaking of the importance of NYTW for Jonathan and herself, said, “How do you give birth to yourself? You can do it in the East Village.” Talking about the social attitude towards HIV/AIDS when Larson penned this musical, Tom Viola, executive director of Broadway CARES/Equity Fights AIDS, recalled, “We were facing a country and a city that didn’t want to face it.”

Tony Award winner Billy Porter powerfully shared how much Jonathan’s production meant to him. “I lost my first friend to AIDS when I was 17. By the time I was 21 I had lost more friends than my grandmother,” Porter said.

Anais Mitchell, who wrote “Hadestown” also developed at NYTW before going to Broadway, explained, “This was a theater that had a history of bringing outside musicals on stage. The spirit of ‘Rent’ is hanging around the NYTW building. NYTW is a safe, challenging and supportive space to make musicals. It’s a space for process as well as product.”

Addressing the lack of theater program funding, the BeAnArtsHero.com campaign was discussed; it seeks to push the Senate to advocate for funding the arts. Former “Rent” producers Jeffrey Seller and Kevin McCollum talked about experiencing musical numbers in “Rent” and knowing they wanted to be a part of it. Throughout the evening cast members from the original NYTW productions, people who also went on to star in the Broadway version, shared their remembrances of getting their big break with “Rent” and what it meant to them. Daphne Rubin-Vega, who played Mimi shared, “‘Rent’ was one show that represented people that I knew, being a person that grew up with singers, actors and painters.” Talking about the evening one-on-one, Rubin-Vega later said, “It was much more emotionally moving than I expected! Seeing, hearing, remembering so many faces is a family reunion. The combination of archival footage and all the amazing talent that has since shared and participated in the journey and the inconceivable loss that we experienced in losing Jonathan.”

Reflecting on the serious issue of HIV/AIDS that the rock musical inspired by “La Boheme” addressed, Rubin-Vega commented, “At the time, my friends who were living the real deal felt it was reductive Mickey Mouse tourism of their serious painful experience. I understood. That was tough. It made me try to keep it real.” Originating the role of Mimi meant so much to Rubin-Vega, “It was truly the most amazing experience of my life. The impact changed me, my respect for theater, storytelling, and most of all, representation.” Larson passed away Jan. 25,1996, the day before the musical was to open; he had only had the chance to see a dress rehearsal. The opening night went on, but with an invited audience after the cast all came to the theater during a snowstorm to comfort each other. Recalling that day and how they went on Rubin-Vega said, “It was easy because we performed for him. We performed in his memory which was more powerful than anything I’ve ever experienced before or since.”

Original cast members including Idina Menzel, Taye Diggs, Anthony Rapp, Adam Pascal, Rodney Hicks, Wilson Jermaine Heredia, Brandon Victor Dixon, Fredi Walker-Brown and many others shared their thoughts of “Rent,” this extraordinary musical that Larson created and how they felt to hear that he had passed away. “Rent” started at NYTW, went to Broadway’s Nederlander Theatre on W. 41st Street and has gone all over the world. People from various productions of “Rent” from off-Broadway to international productions spoke about it and the relevance of the messages behind it.

A part of the evening which truly touched my soul was when Billy Porter seemed to bare his, as he gave me chills performing “I’ll Be Your Shelter.” Porter sang his heart out and definitely had me in tears as you could feel the raw passion and love he exuded. “Take Me Or Leave Me” was marvelously performed; that happened to be one of my favorite numbers in the musical. “Seasons of Love” was performed magnificently by a combination of “Rent” cast members from different companies.

Lin-Manuel Miranda was among those to praise Larson: “You fulfilled every promise and then some. We continue to perform your work. Someone else has permission to tell their story because you told yours,” Miranda said.

Ben Platt performed “Without You” so beautifully as screens were shown from rehearsals of the original Broadway cast. Every moment was so emotional. Acknowledging Larson’s milestone, it was shared that “Rent” won the Pulitzer Prize April 9, 1996.

Jeremy O. Harris, who is currently working with NYTW through its Artistic Instigators Project, speaking of Larson said, “‘Rent’ cracked open a way for us to be seen and heard.”

Eva Noblezada from “Hadestown” performed a very sexy version of Mimi’s song, “Let’s Go Out Tonight” complete with a stripper’s pole in her room.

During the evening Larson was paid a tribute that was much deserved. It was remarked, “Jonathan, at a time of a true crisis in a community, dealt with it with love and compassion.”

I had chills again as original NYTW “Rent” cast members beautifully performed, “No Day Like Today.” Everyone wished “Rent” a happy 25th anniversary. This was followed by an unforgettable performance of “Seasons of Love” by the Broadway, Off-Broadway, National Tour cast, 10th anniversary cast, 20th anniversary cast. Again, all said happy anniversary as they held a lit candle and blew it out.

“Rent” is a timeless, history-making production that dealt with a delicate topic, but once Larson breached it with love, it made it more palpable. It proved to be his labor of love to endearingly remember his friends who has died of HIV/AIDS and to also signal acceptance to the gay, lesbian and drag queen community, a very brave mission, especially in the time he did it. NYTW had the vision to see Larson’s work, its possibilities, its power and its beauty and gave it a home, something NYTW continues to do. If you are interested in donating to NYTW go to www.nytw.org.