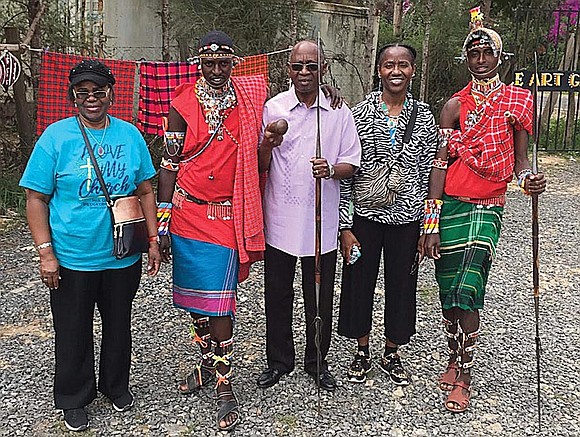 Olusola Togun-Butler is in the black and white blouse Contributed

Olusola Togun-Butler, who goes by Sola, psychotherapist and CEO of Butterfly Counseling Services, is trying to normalize mental health therapy in Black communities and for people of color. She wants to let them know that needing help is part of life.

Black communities and people of color stay away from discussing matters of mental health because they believe it to be taboo. “According to a study out of the University of Wisconsin-Madison, both African men and women reported being somewhat open to seeking mental health services but prefer religious coping,” Healthline says in an article.

Sola mentions that many Black communities do not talk about mental health, especially when people believe that their personal mental stability is unbalanced, and this way of thinking is passed down from generation to generation.

“The African American community is very diverse,” says Sola. “So you have clients who have maybe immigrated from Africa, from the Caribbean, and the cultural belief is that you keep your family business within the family, that you don’t talk about your stuff to outsiders, and definitely not to a stranger.”

Sola mentions that she is seeing a change with the younger generation who are trying to separate themselves from this way of thinking because they are noticing that there is intergenerational trauma. The mental health of the younger generation is at the forefront of their minds. It is important to them just as much as their physical health.

Sola is trying to reach out to those who may still be uncomfortable with the notion of talking to someone. She wants to service those who have a hard time talking about their feelings and show people of color that there are therapists of color they can talk with. Sola brings up the fact that she is not surprised that people of color are diagnosed as having a psychosis at a higher rate than the white community. Often there is no understanding of their culture and what a person has been through.

“It’s not uncommon for people to say, ‘I prefer to see a therapist of color because I feel like he or she would understand racism and oppression because they look like me and understand what it’s like to deal with that on a daily basis,’” says Sola. “This worldview is not a basis for [Black people] to be misdiagnosed.”

According to a BBC article, “Research has shown that a Black client’s experience can be misinterpreted by a white therapist and lead to dangerous misdiagnoses.” Sola has a similar view about this as she too stated that communities of color have a higher rate of misdiagnosis when it comes to mental health.

Sola has created a safe environment for people of color to express their feelings comfortably. She uses her actions and words to make them feel this way by validating their experiences. Sola mentions that validation of people’s lived experiences is very important.

“That’s where that empathetic aspect of being a mental health practitioner comes from where you are able to put yourself in somebody else’s shoes and see the world in their eyes,” says Sola.

This is the way that Sola connects as a psychotherapist with her patients. She advocates for her clients and works with other mental health practitioners to help them understand where a patient is coming from culturally. She makes sure that they are not quick to misdiagnose them without understanding first.

“I’ve been in this field for a long time, and I’m very passionate about it,” says Sola. “The reason that I continue to stay in this field is to validate the lived experiences of communities of color and to educate my colleagues.”

Sola may have opened her practice so she could make mental health services affordable, but she also wanted to open it to be able to connect with the individuals she knew she could help by lending her ear and expertise.

Three months after opening her practice in January of 2020, Sola had to move her therapy session online rather than continue with in-person meetings.

“I planted the practice in Queens to make it accessible, so people can come to the center to get the services they need,” says Sola. “But then the pandemic struck literally months after I started.”

Since Sola is a veteran in virtual therapy, she is a strong advocate for virtual therapy. Once the pandemic hit, she was able to reach more people virtually as her practice adapted to this new way of living. Sola got into virtual therapy in 2016 when it wasn’t quite popular yet. She loved the fact that no matter where an individual is in the world, they can have access to mental health services.

One of Sola’s specialties is working with domestic violence victims, and she meets with them virtually. The first thing that she looks at is creating a safety plan for these individuals where they can meet with her virtually and be able to discuss their emotions.

“What some of them would do is go to the location of a friend—a friend that has a private room where they can go and meet me because they can’t do it at home,” says Sola. “So it’s a safety plan and the creation of a safe environment with virtual sessions that take place for them.”

Sola creates a safe environment for all of her patients and adapts to the kind of safety they need. She doesn’t judge but instead listens and empathizes with them.