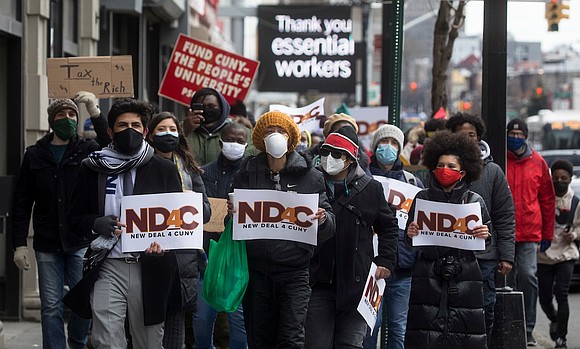 The union representing the City University of New York’s teachers and staff praised a recent report by New York City Comptroller Scott Stringer on the university’s contributions to the city.

Using data provided by the CUNY Office of Institutional Research and Census data on Post-Secondary Employment Outcomes, the study revealed that 79% of CUNY graduates work full-time in the five boroughs after graduation, earning a combined $57 billion annually in 2019.

Nearly 850,000 CUNY graduates work full time in the state, comprising close to 10% of private-sector workers and 17% of the state’s workforce with a higher education.

Sixty-four percent of CUNY graduates are people of color and 69% are women.

“CUNY is an engine of social mobility and must be at the heart of any plans for our recovery from the devastation of COVID-19,” stated Stringer, a graduate of CUNY’s John Jay College of Criminal Justice in Manhattan. “Few institutions better reflect New York’s incredible diversity and it is time that we as a city recognize the power of CUNY and adequately invest in its students and its teachers. There is no economic recovery for New York without a strong and well-funded CUNY system.”

On top of making tuition free, the CUNY New Deal also calls for hiring 5,000 more full-time faculty members, with current adjuncts at the front of the line, within the next five years and for the increase of adjunct salaries nearly to the level of full-time faculty and those with tenure.

Barbara Bowen, president of the Professional Staff Congress (PSC-CUNY), has urged the state government to sign off on a “New Deal” for CUNY, which involves making tuition free. From 1847 to 1976, students who qualified for admission didn’t have to pay tuition. It’s something that Bowen would like to see again.

“As lawmakers negotiate our state and city budgets, we urge them to consult Scott Stringer’s report and see that the economic return on investment for CUNY means a faster COVID recovery now and a stronger, more inclusive state economy,” stated Bowen. “The meaning of the investment to individual lives goes beyond what can be measured in dollars.”

According to the Fall 2019 CUNY Student Data Book, Stringer’s report reveals that over 80% of CUNY students are New York City high school graduates. Eighty-five percent are people of color and 35% are foreign-born. Half of students come from households with incomes below $30,000.

The report also showed that CUNY graduates working in New York earned a combined $57 billion annually ($67,000 on average) in 2019—$28.6 billion more than students would have earned without a postsecondary degree—and paid early $4.2 billion in state income taxes in 2019.

In February, the CUNY Rising Alliance (coalition of community, student and labor organizations), Brooklyn State Sen. Andrew Gounardes and Bronx Assemblymember Karines Reyes held a news conference through Zoom to push for the CUNY New Deal. Gounardes and Reyes are the main sponsors of the bill.

Bowen believes that making CUNY free would lessen the burden on City Hall and on New Yorkers entirely.

“In the depth of the Great Depression, New York invested in three new CUNY colleges: Brooklyn College, Queens College and Lehman College. New York needs that vision now from state legislators in Albany and from our elected representatives in New York City. We thank the comptroller for his report and call on lawmakers to act now on the New Deal for CUNY,” stated Bowen.