High schools reopen, mayor pats self on back 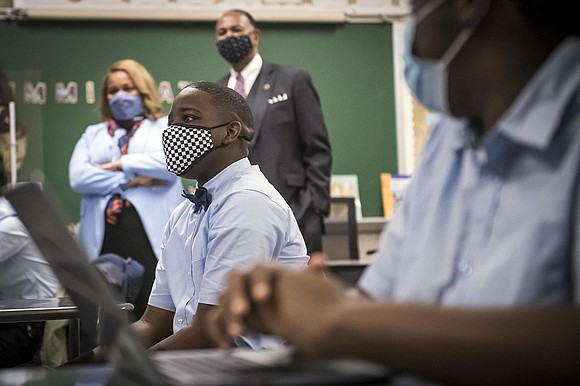 The kids are back, and the mayor’s taking a victory lap.

New York City Mayor Bill de Blasio patted himself on the back this week when, for the first time since November, the city’s public high schools reopened for in-person learning. On Monday, 488 high schools partially reopened with the majority of high school students, 70%, still learning from home after choosing remote-learning for the entire school year.

Fifty-five thousand students between grades 9-12 are expected to come back to class.

The majority of students staying home for remote-learning didn’t stop the mayor from expressing a sense of satisfaction with how the city handled school in the age of the coronavirus.

He praised the importance of students “happy to be back with their friends, happy to be back with their teachers, a really supportive, warm school community. Where you know that every single day that a child is in that building with those teachers, with that staff, they’re getting love, support, and getting the kind of incredible gifts that educators can give to kids. So, high school is back all over New York City today, and that is a very, very good thing.”

De Blasio and recently appointed Schools Chancellor Meisha Porter greeted students outside of the Bronx School for Law, Government and Justice in District 9 with its principal Johanie Hernandez. The setting on Monday was different from the setting last fall.

The mayor and then Schools Chancellor Richard Carranza closed all high schools and middle schools for full remote-learning, but put a blended-learning plan (part-remote, part in-person) in place for lower grades that parents had a short time to opt-in or out of.

According to the mayor the current opt-in process for 3K through elementary school and District 75 began this Wednesday (March 24) and will end in two weeks (April 7). He said that the city would honor those who want to opt back in for in-person learning to the end of April. He’s still working on an opt-in process for middle and high schoolers.

Porter said that schools opening are a sign of the city coming back and are the result of hard work to bring people back together.

“Our school communities have been through so much this year,” said Porter. “And that's why the mayor said we will be holding schools harmless for register losses this year. And I can tell you, there are a lot of schools who are really excited about that. And we look forward to doing that for school communities, because we know how important the work is that we need to do.

“And remember, as we make these moves and move into these moments, we will always keep health and safety at top of mind,” continued Porter.

But according to a poll byThe Education Trust–New York, the excitement of school re-opening is dampened by the unequal education provided.

Released last week and conducted by the Global Strategy Group, the poll found that 83% of all parents are concerned about their kid meeting the state’s academic standards, but in underserved communities that concern is reinforced. The poll also found that 59% of parents of color and 77% of Black parents are concerned with meeting academic standards. Fifty-eight percent of low-income households share the same concern.

When it comes to white parents, 39% are concerned about their kids meeting academic standards

along with 45% of higher-income parents.

“These survey findings reinforce the need for urgent action from state officials and education leaders to ensure that New York’s students and families do not continue to pay the toll for pandemic related school closures,” stated Dia Bryant, interim executive director of Ed Trust–NY. “It is crucial that we leverage the voices of parents and take action for better, more equitable policies that are critical if we are to build back stronger and better serve students who were already underserved prior to the pandemic.”

When the AmNews talked to a couple of high school students, both planned on doing different things but felt the same way about the school year.

“Honestly, I’m nervous about school and decided not to go back into the building this year,” said Ahkiyrah Ramkisson, gender justice campaign organizer for Teens Take Charge. “As a senior in high school, I think about the risks we’re taking and the people we are putting in danger. We shouldn’t rush this process before making sure that everyone is safe. That being said, it breaks my heart that I lost out on my senior year.”

“Meeting your classmates again feels fun,” said Meril Mousoom, 17. “I think what changed for me was the one-year mark of COVID and knowing that I won’t get my senior year back. I feel like in online, every day feels the same.”

New York City Public Advocate Jumaane Williams stated that it’s imperative to make sure all students have access to the necessary resources to thrive in class.

Williams said it’s “also critical that the move to reopen schools to some students does not detract from the effort or resources needed to support and improve remote learning for the vast majority of students learning from home—throughout this past year, a focus on in-person learning for a third of students has impeded work to enhance remote education for all students.

“Reopening buildings will require intentional, collaborative community engagement by the city in order to renovate old systems, innovate new strategies, and rebuild confidence in our ability to enact them,” said Williams.