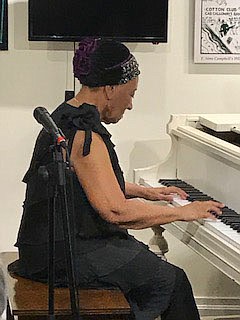 In honor of Women’s Month, we pay tribute to a most accomplished jazz pianist, composer and educator Bertha Hope. As an elder in the jazz community and influencing generations of young musicians she has recorded just three albums as a leader.

All three are extremely impressive and necessitate more. Her “Elmo’s Fire” (SteepleChase 1991) a jazz classic features bassist Walter Booker, trumpeter Eddie Henderson, tenor saxophonists Junior Cook and Dave Riekenberg and drummer Leroy Williams. Hope gives her abled musicians ample space for expression in the realm of hard bop hipness which swings in the same category as Horace Silver. The seven tracks include four by Elmo Hope, two by Bertha and she restructures Sonny Fortune’s uptempo “For Duke and Cannon” into a touching ballad. Her talent shines with soft rhythmic chords and never overstating the moment as Williams’ offer soft brushes with deep whispers of Booker’s bass. “In Search Of” (SteepleChase 1990) has Hope leading with bassist Walter Booker and drummer Billy Higgins. “Nothing But Love” (Reservoir 1999) features bassist Walter Booker and drummer Jimmy cobb. These albums demonstrate Hope’s multi-faceted flexibility as an influential player in the jazz pool.

“It’s hard to figure out why my recordings have been so sparse but I’m looking for a way to record now,” stated Hope. “I just turned down a European offer that was not to my liking.” Hopefully, a recording is on the near horizon her piano voicings need to be heard.

She was in improvisational mode on Frank Lowe’s album “Soul Folks” (1998). The avant garde saxophonist and composer noted in the liner notes that Hope brings forth a color “somewhere between Herbie Nichols and Andrew Hill.” The pianist said, “it was quite a surprise to be asked by him to perform on that recording.”

Hope has perfect pitch. “At 3 years old I went to the piano in our house (born and raised in California) and while listening to the radio played Brahms’ “Lullaby.” Her mother Corinne Meaux Rosemond was a chorus line dancer and father Clinton Rosemond toured as a singer and stage manager in Europe (1915-’29). He also performed with the Mable Mercer Trio, John Payne and Eubie Blake.

Hope was receiving a regular dose of Billie Holiday, Shelly Manne and Duke Ellington on the radio when she met aspiring drummer Billy Higgins in the ninth grade. It was her young friend Danny Johnson, who told her, “Listening to Bud Powell will change you forever.” She says Powell led her to Thelonious Monk then to the young man that would eventually become her husband Elmo Hope.

In high school at the age of 15, she and younger brother Clinton (age 13) who, she says, drew an eyeliner mustache so they could get into the local jazz club to see Billie Holiday; singer, musician Johnny Otis and saxophonist Teddy Edwards. She was asked to play at the Oasis Club but had to get permission from her parents, who threatened the owners regarding her safety. “They set up a special little place for me away from the bar, where I could sit during intermission,” explained Hope. “It was a great gig for two years.”


The multi-instrumentalist and composer Eric Dolphy was a family friend, who lived in the same neighborhood. Hope and Dolphy attended Los Angeles Community College in the music program. Dolphy often invited her to his house for his band rehearsals that included Max Roach, Clifford Brown, Richard Powell (Bud’s brother) and Harold Land. “Richie taught me how to put chords together and became my informal teacher,” says Hope. “Today I am still developing into my own. During those days I just didn’t want to sound like anyone else. Music evolves over time and I don’t want to be pinned down. My evolution will be going on as long as I’m on the planet.”

She was playing solo gigs in Beverly Hills before going on tour with saxophonist Vi Redd’s band (the “Route 66 Tour”). This was the real beginning of her young career. After the band was stranded in Florida, she went to New York City where Elmo had a deal with Riverside Records. The two were married in 1960 and moved to the Bronx. In 1961 Elmo recorded his debut album “Hope-Full” for Riverside Records, performing five solo piano pieces and three piano duets with Bertha. “That was our first album together I should have been more prepared, I was nervous in the studio,” said Bertha. “I feel like I’m never ready to record.”

When it comes to his influence on her, she stated, “I can’t measure how Elmo influenced me but Bud was my first influence and Monk could get so much out of so few notes. I listened to him so often and he offered something different, little surprises that your ear picks up but very personal.” In September 2016, the Bronx tree lined block of Lyman Place where Elmo, Bertha and baby daughter lived was co-named “Elmo Hope Way–Jazz Pioneer.”

Following Elmo’s death in 1967, she formed ELMOenium, with bassist Walter Booker, a tribute ensemble. Becoming somewhat disenchanted with music she abandoned her piano and took a job at the telephone company while taking night classes thru an extension BA degree program offered by Antioch College. Art Blakey offered her a chair in his band but she turned it down. He informed her she needed to be playing not in a classroom. After earning her degree (1976), she took a position as director of a Headstart Program before taking Blakey’s advice and joined the all-female Kit McClure big band in 1982. “Playing with Kit was a good learning experience,” says Hope. During her free time she hung out at the rehearsals of her close friend drummer Billy Higgins and saxophonist Ornette Coleman. “Ornette had an interesting process, his approach was intriguing with different elements, it was very spontaneous,” said Hope. “I absorbed a little of that.”

When she was looking for a band that would incorporate Elmo’s music. The drummer Philly Joe Jones suggested she put together her own band and learn 12 compositions from his repertoire and go for it. Following his advice, she formed a band with saxophonist Charles Davis, bassist Walter Booker, trumpeter Virgil Jones and drummer Leroy Williams, and made a recording in Florida with the assistance of Nat Adderley.

She later joined bassist Carline Ray and drummer Paula Hampton for an all-female trio formed by jazz promoter, producer and activist Cobi Narita. The trio became known as Jazzberry Jam and added alto saxophonist Sweet Sue Terry, and various vocalists over the years also joined the group. The group with their intuitive communication and intense swing inspired a generation of young female musicians during their 15-year tenure. They performed at the Kennedy Center which is on YouTube.

“Performing in female bands just happened that way but women work just as well together as men,” explained Hope. “We are still a minority in jazz and working together is always a great idea. We are role models in this music and are preserving the jazz tradition.”

Hope and bassist Walter Booker her companion of 23 years married in 2004. His recording studio Boogie Woogie (87th Street and Amsterdam Avenue) was used by everyone from Richard Pryor to Buddy Williams and Nat Adderley. Hope was most proud of the NEA grants that allowed high school students and young musicians to use the studio free of charge.

Hope is a former teacher of Jazzmobile Manna House Workshops in East Harlem.

“Since the coronavirus I have been working on some new material, practicing a lot more and becoming more acquainted with Elmo’s music,” said Hope. “I have to up my game on technology so I can teach on Zoom.” She is also working on a documentary of her life with the bassist Mimi Jones. “We were moving forward on that project then COVID-19 hit but it will eventually happen,” she assures. During a recent performance at the National Museum in Harlem, she noted, “I didn’t realize how much I missed playing in a room until this project. I am trying to stay healthy and navigate all of this with my family."