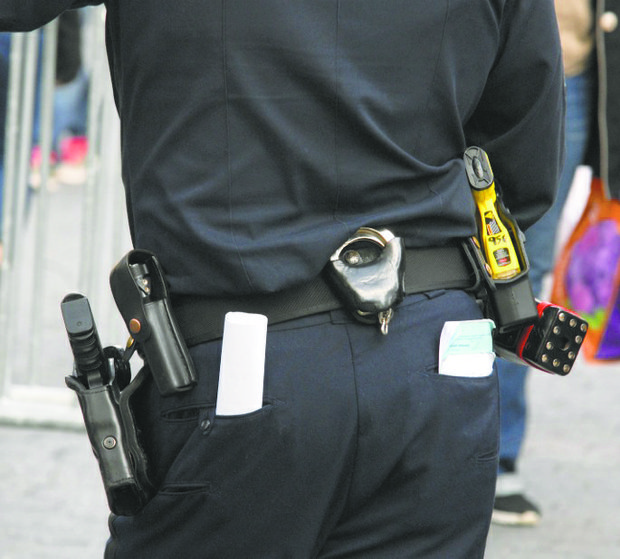 Another day, another story of police violence.

An NYPD officer was suspended Sunday night after viral video showed police use an apparent chokehold on the boardwalk in Far Rockaway.

NYPD officers handcuffed an 8-year-old boy and a 14-year-old boy after they spotted the boys with a group running with sticks on their way home, according to a report released Monday.

Should the police officers be the one's responsible for enforcing the guidelines?

Criminal justice advocates are calling on the city and state to suspend broken windows arrests and similar criminal penalty enforcement policies to prevent the spread of COVID-19 to vulnerable populations.

New York State has an important opportunity to pass reform this week that will make our criminal justice system more fair and more transparent.

New bill bans cops from having sex with detainees

New York State didn’t have a law that banned cops from having sex with those in custody.

NYPD officers now required to identify themselves, let people know they can refuse being searched

NYPD officers will soon be required to identify themselves and inform people that they have the right to refuse to be searched in nonemergency encounters.

Already during this brief post-Obama period, community activists are figuring out ways to combat the NYPD’s racial profiling of New York City’s citizens of color.

Do Black lives matter when it’s a Black cop?

July 25, 2016, Montrell Jackson, a Black police officer recently killed along with two others in Baton Rouge, La., by Gavin Long, a Black former Marine, was laid to rest at the city’s Greenoaks Memorial Park.

Even before five fellow Dallas officers were shot and killed last week, Morris Pope was already in sorrow.

Court to NYPD: Figure these stop-and-frisk reports out

Police officers in the five boroughs are struggling to adapt to changes to stop-and-frisk polices.

Stop looking. There’s nothing else to see here.

As 2015 concluded, various organizations attempted to accurately document the number of killings committed by on-duty cops across the country during the previous 12 months.

Ramifications of the terrorist carnage in Paris has put many large metropolitan cities of the world on full alert.

Safe and Fair - Everywhere: Will it work?

With the addition of 1,300 more cops on the street, a new plan by the mayor and the police commissioner aims to improve police-community relations while keeping people safe.

Many Blacks want to be blue

Insert foot in mouth here. Or in other words, good morning, Commissioner Bratton. Recently NYPD Commissioner Bill Bratton said in an interview with The Guardian newspaper that a problem exists with hiring Blacks for the Police Department because “we have a significant population gap among African-American males because so many of them have spent time in jail and, as such, we can’t hire them.”

The meltdown of NYPD and the citizenry of NYC

If there has ever been a question of whether the NYPD is out of control, the answer is certainly evident at this point. It is.

Ignorance of law no excuse for police?

Like most people, Sergeant Matt Darisse of the Surrey County, N.C. Sheriff’s office believed driving with a broken taillight is against the law.

The Patrolmen’s Benevolent Association (PBA) and the Sergeant’s Benevolent Association (SBA), two unions that represent NYPD officers, have attempted to block the Community Safety Act, which was passed into law last year by the City Council despite a veto from former Mayor Mike Bloomberg. The act makes it easier for New Yorkers to sue the NYPD for racial profiling. State Supreme Court Justice Anil Singh tossed the unions’ legal challenge and said the city’s ban on racial profiling is constitutional.