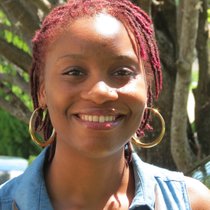 Malorie Marshall is currently pursuing her Master's in Journalism at the CUNY Graduate School of Journalism. You can find her online at www.maloriemarshall.com or on Twitter at @maloriewrites. She is joining the Amsterdam News staff for the Spring 2014 internship semester.

Malorie Marshall is currently pursuing her Master's in Journalism at the CUNY Graduate School of Journalism. You can find her online at www.maloriemarshall.com or on Twitter at @maloriewrites. She is joining the Amsterdam News staff for the Spring 2014 internship semester.

In 2010, of the over 2,000 recorded completed suicides by African-Americans, about 82 percent of them were completed by African-American males, according to the American Association of Suicidology. “Face of Darkness” filmmakers Squeaky Moore and Kenneth Nelson are hoping that their new documentary film can help challenge the stigma in the Black community surrounding issues of mental health. “As an African-American male, I was taught that a man could not express his feelings and never to cry,” Nelson said via press release. “There is a stigma in my community that prevents males from sharing emotions, hugging or admitting that we are afraid.” The documentary, which will be shown at the Schomburg Center for Research in Black Culture on Tuesday, May 20, follows the battle three African-American men face while dealing with depression. The documentary also features mental health specialists Dr. Jeffrey Gardere and Terrie Williams, author of the acclaimed “Black Pain,” who says that fighting the silence around mental health struggles is one of the most important things we all can do. “The reality is, if you don’t go and talk to someone, you will die,” Williams said in a phone interview. “It may be a slow death, but you will die. You will not be all that God intended you to be.” “Face of Darkness” will be shown at the Schomburg Center for Research in Black Culture in Harlem on Tuesday, May 20 from 6-9 p.m.

Mental illness and depression don’t discriminate: A look at teens and suicide

The Thursday before Valentine’s Day, the temperature never made it out of the 30s. Wet, half-brown slush covered the ground and another New York City child decided to take her own life.

Three CSA sites located in the Bronx, Central Brooklyn and West Harlem will be featured by the New York City Coalition Against Hunger for the 2014 season.

A firefighter on the scene of his first fire is responsible for saving the lives of four children threatened by fire.

The eighth annual Power of Women to Make a Difference luncheon was hosted by the United Way of New York City’s Leadership Council.

Check out what the largest city in Texas has to offer this June for Caribbean-American Heritage Month.

‘Xscape’ into summer with a new Michael Jackson album in May

Epic Records announced a new Michael Jackson album slated for release in May.

A new union in Crown Heights is determined to protect residents from unfair treatment from landlords.

President Obama and the White House host the first-ever student film festival and promise millions of dollars in software for use in classrooms across the country.