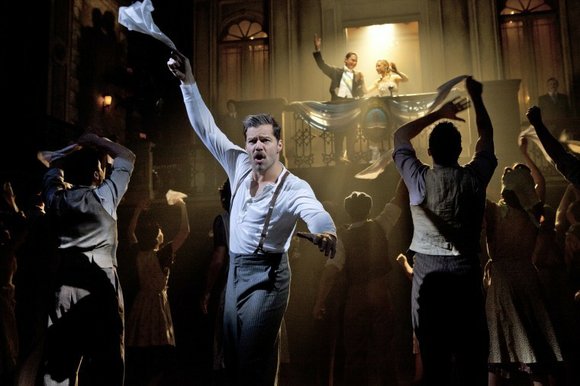 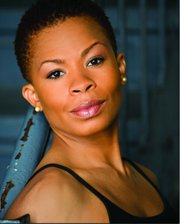 Smoothly directed by Michael Grandage, with the alluring choreography of Rob Ashford, whose tangos are to die for, "Evita" stars international superstar Ricky Martin, who is exceptional in the narrator role of Che; Elena Roger, the Olivier Award-winning Argentine actress making her Broadway debut in the title role; and Tony winner Michael Cerveris as Juan Peron. Bradley Dean, who played the role of Juan Peron at the performance I attended, was marvelous.

With the memorable lyrics by Tim Rice and Andrew Lloyd Webber's delightful and enduring score that includes smash hits such as "Don't Cry for Me Argentina" and "Buenos Aires," "Evita" is a unique bio-operetta about the rise and demise of Eva Peron. Born in 1919 in the rural village of Los Toldos, Argentina, Evita moved to the nation's capital, Buenos Aires, in her teens. In the bustling city, according to her biography, she purportedly slept her way into careers as a model, radio personality and actress, eventually becoming the second wife of President Juan Domingo Peron, who governed Argentina from 1946-1955 and 1973-1974. The visionary, deeply ambitious Evita died of cancer in 1952 at the young age of 32.

The musical opens during the aftermath of Evita's death. As the company captivatingly performs "Requiem," a gray haze covers the stage, where an ensemble of black-clad mourners grieves for their dead heroine. At the same time, documentary footage of the real-life funeral is shown on a screen. As the number ends, a cynical Che, who in essence serves as the perfect guide, voyeur and conscience of the story, brilliantly executes the number, "Oh What a Circus," as he and a quartet who serve as a Greek chorus prepare the audience for Evita's remarkable life journey.

A flashback to a club--during which the audience meets the young Evita and her lover, singer Magaldi (Max von Essen), who becomes her ticket to Buenos Aires--sets the foundation for the ensuing story. Later, in the city, Evita meets Peron and becomes his lover, after ousting his mistress (Rachel Potter). Shortly after, Evita becomes Peron's political collaborator, confidante and wife. Both von Essen and Potter's voices are a dream.

Throughout the musical, Evita's climb to the top is smartly chronicled by Che, who unveils a variety of things such as her political ambitions for herself and how she was never accepted by the upper echelon of society, but was adored by the poor and women, who, because of her efforts, were given the right to vote. The audience also gets a sampling of her ingenious "Rainbow Tour" PR campaign to put Argentina on the map by visiting the heads of state of various countries, making herself a political celebrity at the same time. The first lady was also viewed by many of the poor as a saint, as presented in the touching number "Santa Evita."

Since beginning previews on March 12, "Evita" has broken the box office record seven times. Before "Evita," the previous record for an eight-performance week was $1,073,881, earned by "The Drowsy Chaperone" in 2006. "Evita" first broke that record--in only six performances--the week ending March 18, with a total gross of $1,167,685, and went on to surpass its own record several more times.

Casting Pearls cheers to Bahiyah Hibah and Eric L. Christian, who are among the talented cast of 36. Wonderful work! Hibah's credits include "Chicago," "The Color Purple," "The Little Mermaid," "Rock of Ages" and Roundabout's revival of "Pal Joey" and "Memphis." Christian's Broadway credits include "South Pacific," "Cry-Baby," "The Color Purple," "Hairspray," "The Lion King" and "Chicago."