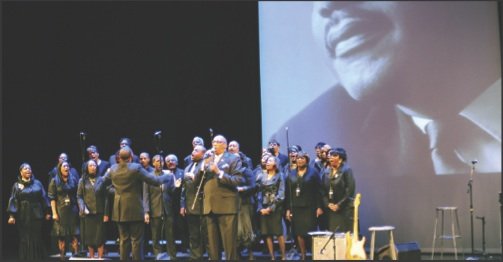 BAM has organized this annual celebration for 26 years, and each year they try new, innovative ways to attract more and more people in order to better highlight the struggle and legacy of civil rights activism.

The celebration began on Jan. 13 with "Picture the Dream," an art exhibition organized in partnership with the New York City Housing Authority (NYCHA). It presented the artistic works of children living in Brooklyn public housing residences. Through free art workshops guided by Cey Adams, who worked with Def Jam and Bad Boy, the children created original artwork inspired by King's dream of freedom and equality.

They all acknowledged that King changed the nation with his call for basic civil rights.

Sen. Charles E. Schumer stated, "In our nation, Martin Luther King is the only one man who has his own holiday and it means a lot. He was simply one of the greatest men America has ever known. He wasn't only a civil right activist but a great philosopher, and through his writings and speeches, he delivered people from the darkness."

Meanwhile, Clark said that "even if the dream started years ago, it's still to be fulfilled." Would King be happy with the way society is right now, she asked. Would he not be perturbed by the questionable policy of stop and frisk by the NYPD? "We have to look every day to know how we treat each other, and then wonder how we will continue the dream," she told the audience.

After two hours of lively speeches, testimonials and musical performances, the ceremony continued with a screening of "The Black Power Mixtape 1967-1975." This documentary was realized and shot by Goran Olsson, a Swedish journalist. It shows the evolution of the Black Power movement from 1967 to 1975. Between musical performances and interviews of different activists, this film looks at parts of the legacy of the Black activist movement in American culture.

"BAM has once again succeeded its challenge. I come to the celebration every year, and I enjoy every moment of it," said Jewel Hunt, a spectator. "Coming here is a ritual for me. I say to myself that I have to come because as a Black woman, this is part of my heritage."