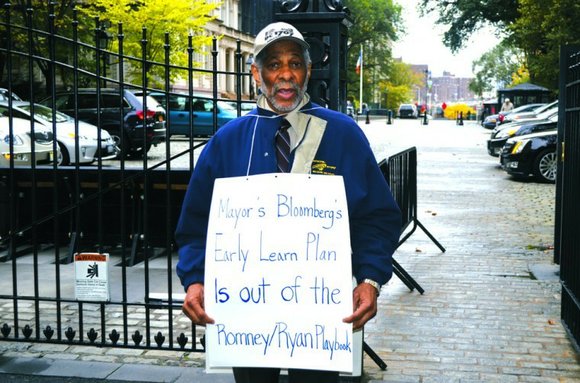 DC 1707 AFSCME Executive Director Raglan George Jr. was a one-man picket line in front of City Hall on Tuesday, the second weekly march highlighting the deficiencies and irregularities in the Bloomberg administration's Early Learn program. Since the program took effect in October, nearly 800 union workers have been terminated because of it.

"I am here alone. I am not asking my members to come out. They have felt enough pain. This is my responsibility," George told the AmNews. "I am here to dramatize the mayor's insensitivity by cutting the budget for child care and pushing this Early Learn program, which is a flawed program."

In 2006, Mayor Michael Bloomberg funded 116,000 child care centers. Since then, programs have been cut by more than 30 percent. Hundreds of parents across the city do not have access to subsidized child care after dozens of child care providers had their city contracts eliminated or downsized with the arrival of Early Learn, which brings together education, child care, nutrition and other services into a single integrated program for 50,000 children ages 6 weeks to 4 years old. In all, 154 organizations received contracts out of the 282 that applied.

Mabel Everett, president of Local 205 Day Care Employees DC 1707 and former teacher at Parent Day Care Center since 1974, stood powerless as she watched her center close this month. Everett joined George in support of union workers. "Early Learn needs to be re-evaluated, and sponsoring boards should be able to re-apply and get their centers back," she said.

George said DC 1707 would continue their protests as long as services are being cut and until the administration fixes the chaos created by Early Learn. "The union will continue to help workers who have been laid off find work," said George. "We are not going to give up. We will continue to fight back. Maybe we can turn this thing around."