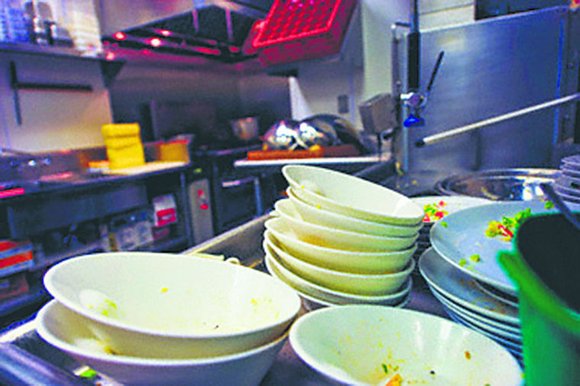 Chants of "One, two, three, four! No one should be working poor!" echoed down Fifth Avenue, disrupting the tranquil streets usually only interrupted by the likes of sirens. These were not ambulances, but rather people marching alongside one man who claims he was unfairly fired by his former employer.

Until recently, Joshua Duah was an employee of the Midtown East restaurant Dishes for 12 years. Originally from Ghana, Duah had aligned with various immigrants' rights groups in order to protest the restaurant's unfair treatment of their workers.

"It's like we are being thrown in a pond. There's no respect for us," Duah said. "It's like we can just be slashed at any time, anybody can be fired at anytime without absolutely [anything]."

Duah and co-worker Nii Yarlie Tackie Yarboi were both fired after refusing to sign a legal document that from thereon out guaranteed overtime pay, but only after they agreed to waive their rights to overtime payments for the last few years.

As well as inadequate wages, he said he and several other workers were deprived of vacation time.

"Somebody can work four to eight years without any vacation," Duah said. "[The management] goes on vacation four times in the year. What about us, who make the place? The owners don't have any respect for the workers. We should be treated as humans."

Both Duah and Yarboi witnessed other workers who had formed their own independent association and union on a picket line protesting against wage inequality and unfair treatment in their workplace. When another employer realized that the same mistreatment was happening at Dishes, the workers connected Duah and Yarobi to the Laundry Worker's Center and they decided to align to help fight for their rights and reinstate their positions at Dishes.

The Laundry Worker's Center is an organization that fights to improve working conditions for their low-income members, who largely work in the laundry industry. After helping other workers win their cases against unfair, unlawful employment conditions, the group aligned with Duah to organize the protest in which Duah lead the crowd from the New York Public Library to the Dishes restaurant on March 13.

According to a representative from the L.W.C., workers are in a vulnerable state. It is only through working together that their management will be more pressured to listen to them, allowing them access to fair wages and the power to make decisions.

Although over 20 cashiers, cooks and supporters of fair workers' rights united to support Duah as he marched to deliver a letter to his former managers, the restaurant has not acknowledged any wrongdoings done to its staff.

Duah's delivery of the letter is an example of a concerted activity, or a legally protected activity in which workers engage in collective retaliation. However, as protesters entered Dishes, they were urged to stop chanting and leave quickly so as not to disturb their customers.

Management at Dishes did not respond to a request for comment.

The protesters chanted, "We'll be back" as they filed out of the building. While they have not physically returned to the restaurant yet, many people have taken to the web to inform the public about the "dirty dishes" at Dishes. One commenter on Yelp, a website that allows users to recommend or express negative experiences about local businesses, expressed her distaste on the restaurant's Yelp page a few days after the protest.

"I think it's important that we as restaurant-goers in this city refuse to give money to employers who act this way," the commenter, "Olivia R." wrote. "We want a NYC that pays all of its workers fairly."

Community members and workers are partnering to post fliers around the city urging people to call the managers of Dishes and tell them to "stop retaliating against workers" and to reinstate those like Duah and Yarboi, who were unjustly fired for standing up for their rights.