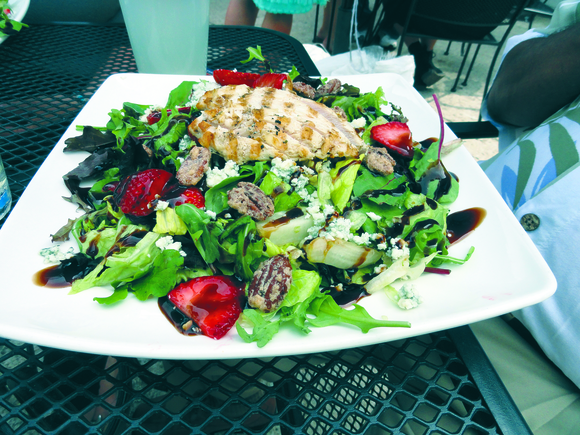 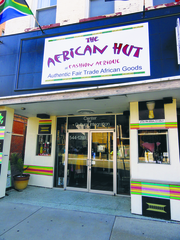 The African Hut is one of the numerous Black-owned businesses in town.

Last time around, we had just started exploring African-American history past and present in Springfield, as it is inextricably tied to the issue of slavery in Lincoln’s day and how the city has developed since then.

In addition to visiting the Springfield and Central Illinois African-American History Museum and the various sites tied to the 1908 Race Riot as shown on the city’s self-guided, eight-marker tour, I was fortunate to be able to spend some time with Douglas King, a founder and board member of the museum.

King is a treasure trove of information, peppering me with all manners of historical tidbits about folks who had an influence on the history and culture here—names like Eva Monroe, an early founder who came to Springfield in the late 1800s and founded an African-American orphanage. Then there’s the Lawrence family, who used bricks from homes destroyed in the 1908 Race Riot to build a school, and Free Frank McWhorter, a former slave who purchased his wife’s freedom then his own and moved to Illinois in about the 1830s, eventually freeing close to 20 family members and incorporating what is believed to be the first African-American town in the U.S., called New Philadelphia.

King filled me in on numerous current entities in town as well, such as the African Hut, Boyd’s Soul Food Restaurant, Carter’s Fish Market, Boyd’s New Generation Restaurant, PT’s Barbecue, Popeye’s and Max’s Lounge, among numerous others. This is just the tip of the iceberg of the Afrocentric history and places that dot the landscape here.

History and recreation a plenty

For history buffs, the Springfield area offers a great deal of sites and attractions, like the Illinois State Military Museum, which traces the life and career of John A. Logan, a general serving under Gen. William T. Sherman during the Civil War; and the Edwards Place Historical Home, a beautiful Italianate mansion and the oldest home in Springfield.

The Dana Thomas House is one of the most popular attractions in town, as it was designed by Frank Lloyd Wright in 1902; the Vachel Lindsay Home State Historic Site celebrates the life of its namesake—Nicholas Vachel Lindsay—a noted poet in the 1930s; and the Air Combat Museum is filled with historic military fighter planes, artifacts, flight–related exhibits and other memorabilia, just to name a few.

A feast for the culinary senses

For a city this size, Springfield has a lot to offer on the culinary front. From great Greek, to Japanese, Seafood, Indian, Irish, European, Mediterranean fare and more, you’ll find something to suit your food fancy. Always ready to take one for the team, I, of course, did quite a bit of sampling while in town!

Located in a historic structure, Obed & Isaac’s Microbrewery & Eatery is one of the best places to sample Springfield’s great beer brewing tradition. In addition to a wide range of brews, they serve up a wide range of delicious appetizers, sandwiches, flatbreads and salads.