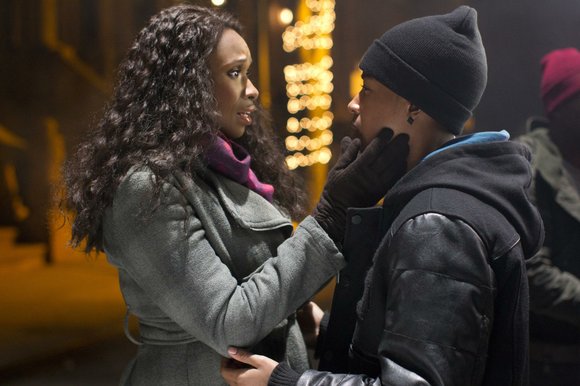 I’d rather be a lamppost in Harlem than the governor of Georgia.” – Langston Hughes

The faith-based holiday musical is about Langston’s (Jacob Latimore) journey. He is a wannabe streetwise teen from Baltimore who is lovingly raised by his single and financially challenged mother, Naima (Hudson), whose life is dedicated to keeping Langston safe and intellectually nurtured.

The U.S. economic fiasco hits the hardworking family like a fiery meteor. Unable to pay rent and with eviction looming, Naima makes the heartbreaking decision to send Langston to Harlem to spend the Christmas holiday with his estranged grandparents, the Rev. Cornell and Aretha Cobbs (Whitaker and Bassett, respectively). Langston has never met his prosperous grandparents. Why?

New York City seems fast and furious to the somewhat sheltered teen, and Langston gets introduced to grimy characters that should only be allowed to exist between the pages of colorful fiction. Loot/Tyson (Tyrese Gibson) and Mary/Mary (Mary J. Blige) seem to be ambassadors of hell and heaven, respectively.

Cornell has stringent rules with no room for compromise, which makes the frustrated Langston determined to return to help his equally stubborn mother. Despite the fact that he’s completely without financial resources, in his mind, he’s heading back to Baltimore for Christmas.

Every time Langston asks his grandparents the vital question, “Why don’t you and my mother even talk?,” he’s never answered. Never. Instead, you can almost hear the antiquated saying, “Children should be seen and not heard,” followed by “Don’t get into grown folks’ business” floating, spectral-like, through every broken attempt.

Stubborn? Hey, these apples didn’t even leave the deep-rooted tree. The redeeming news is that the estranged family shares a love of God. They are faithful to the Bible and filled with deep faith.

Family drama is complicated (amen), and this rift isn’t easy to absorb. Forgiveness seems unattainable, at least in the time it will take to arrest the spiraling chain of events that might make this gifted, young brother another sad statistic. The wrong decision on the eve of his grandfather’s annual nativity pageant can destroy or save Langston.

There are several reasons to support this film. Christian audiences will experience a deeper affinity for their spiritual choices. The music is first-rate, showcasing the vocal range of the cast and throwing in sweet surprises, all impressively presented by filmmaker Lemmons. But there is more to this movie.

“Black Nativity” isn’t just a holiday musical, nor can it be exclusively summed up as a feel-good family drama with gospel-fused R&B music. I’m just going to describe the experience as “Lemmons-esque,” the result of a fearless and passionate dreamer whose deeper imaginative realms have become recognizable in her work.

Lemmons isn’t shy about sharing her views on family, faith, the responsibility of legacy and the need to forgive and be forgiven, which starts with forgiving oneself.

For if dreams die

Life is a broken-winged bird

For when dreams go

Life is a barren field