Mandela still stable at home but unable to speak 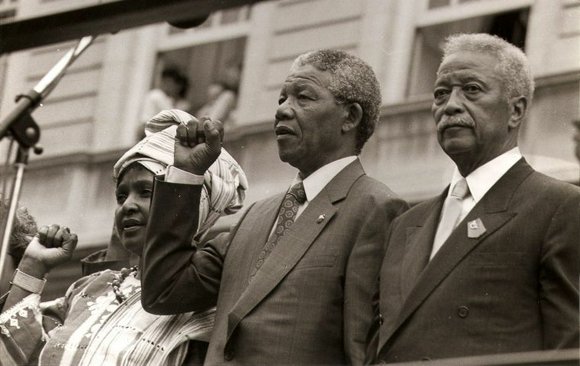 Former President Nelson Mandela is receiving treatment from 22 doctors around the clock at his suburban Johannesburg home, according to a health update from his ex-wife, Winnie Madikizela-Mandela.

Madikizela-Mandela told the press that the 95-year-old leader was communicative, gesturing with his face, but he is unable to speak due to the many attachments to his throat to clear his lungs.

“I have heard this nonsense that he is on life support. He is not,” she told the Sunday Tribune newspaper. Asked if he was peaceful, she said, “Very. When he is relaxed, he is fine,” adding that it helps that he is at home, an environment that he recognizes.

Madikizela-Mandela was speaking from her Soweto home. She focused largely on her prison diaries, published under the title “491 Days: Prisoner number 1323/69,” and the nation’s present disarray.

“I’m frightened,” she said. “The poorest of the poor are seething with rage, and whether our government is aware of the anger of the people, I have no idea,” she said.

Wide-scale unemployment in any country is a ticking time bomb, she added. Also creating resentment was the forcible eviction of informal traders from the inner city center. Approximately 7,000 formal and informal vendors were evicted since October as part of Operation Clean Sweep. Some merchandise was confiscated.

A suit against the city has been filed by the Socio-Economic Rights Institute of South Africa demanding that municipal authorities re-erect the trading stalls at their old locations. Arbitrary “stop-and-search” raids on traders should end, they said.

Also in South Africa, dangerous flood waters covered streets in the Western Cape, affecting over 18,000 people in the province.