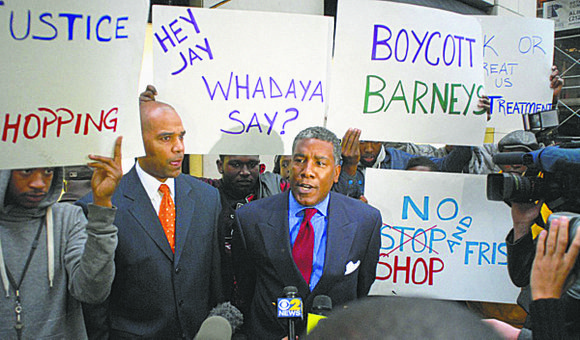 With recent news about Barneys and Macy’s alleged racial profiling and the city’s Commission on Human Rights investigating 17 other retailers for similar practices, some groups are asking Black shoppers to hold their dollars this Black Friday.

As the saga over “shop-and-frisk” stretches into the holiday shopping season, the Commission on Human Rights reported this week that it is receiving requested information from retailers, including CVS, Century 21 and Bloomingdale’s, about security practices. The stores had until last Friday to hand over the information.

“We have already received information from many of the stores, including Macy’s and Barneys, and have been in discussion with all the stores,” said Human Rights Commissioner Patricia L. Gatling. “This is an ongoing submission process, and we will evaluate the information as we receive it. Clearly, this investigation is in the preliminary stage and will be ongoing. There will be no further comment until all information is received and evaluated.”

Earlier this month, several Black organizations, including the National Coalition of Blacks for Reparations in America, the United Negro Improvement Association and the Malcolm X Grassroots Movement, called for Blacks to not spend money on Black Friday.

“America has a Black president and tons of rich Black entertainers, sports figures and businessmen/women. It has a large Black middle class,” said the organizations in a joint press release. “Black America makes more money than any country in Africa—even more than Nigeria with its oil or South Africa with its diamonds and gold. Yet the systematic oppression of Black people in America is deeply embedded in the fabric of U.S. society.”

The organizations also cite the continued mistreatment of Blacks in America, including the outcome of the Trayvon Martin case, the false imprisonment of Mumia Abu-Jamal and the execution of Troy Davis. The groups are encouraging Blacks to circulate Black dollars back into Black communities for empowerment.

Black Enterprise reports that the buying power of African-Americans is expected to reach $1.1 trillion by 2015. Blacks spend $29.3 billion annually on clothing alone. Black leaders ponder what would happen to the retail industry if Blacks participated in a “Day of Absence” this Black Friday.

New York has the largest African-American market in the nation at $95 billion, followed by Texas and California. In 2012, Blacks’ share of the nation’s total buying power was 8.5 percent, up from 8.2 percent in 2000 and 7.5 percent in 1990, according to University of Georgia’s Selig Center for Economic Growth.

“Our hard-earned dollars are a vastly disproportionate share of total consumer spending, especially at Christmastime, and most especially on Black Friday and Thanksgiving weekend,” said Arthur Lewin, a Black studies professor at Baruch College. “We are profiled in department stores, but we still keep coming back for more. Our children are stopped, frisked and killed with impunity.”

Economist and author Boyce Watkins said Blacks should invest in Black-owned businesses this Friday. While he understands that Blacks are flocking to box retailers, he’s encouraging African-Americans to use at least 10 percent of their money to buy Black this Black Friday.

“It gives us the opportunity to change the definition of ‘Black Friday,’” he said. “The word ‘Black’ is already there anyway. Maybe God is trying to tell us something. The Civil Rights Movement gave us political power, but we failed to listen when Dr. [Martin Luther] King and Malcolm X told us about the importance of obtaining economic power. Having political power without economic power is like getting a driver’s license when you can’t even afford to buy a car. That’s why most of our gains have been rolled backward.”